GROWING SOYBEANS
A great source of food, protein and oil

The demand for reliable sources of protein is on the increase around the globe. The soybean is a popular source of protein and oil and is being cultivated in more regions than ever before. This is reflected in the growth in soybean plantings. Soybeans are also increasingly valued as a rotational crop with maize.

Soybeans have only been actively promoted as a valuable crop for the South African market since 1996 but soybean production surpassed sunflower production in 2012, becoming the country’s most important oilseed crop. According to Grain SA, 743 000 hectares were planted to soybean in the 2018/2019 production season. 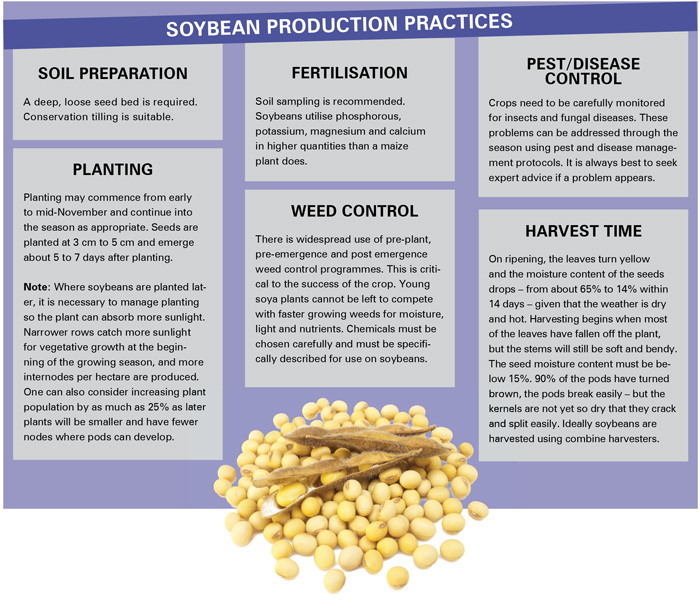 ​​​​​FACTORS INFLUENCING SOYBEAN PRODUCTION
Heat units
Soybeans grow under very similar conditions to maize. The plant responds to heat units so the more heat units available, the later one can plant. This means that in cooler areas one should plant earlier for optimum yields. Interestingly, soybeans need a certain number of hours of darkness to mature properly. Shorter days trigger soybean development. When daylight increases, development slows. The more darkness a soybean plant is exposed to, the quicker it matures. This is why early planting leads to bigger plants with more internodes and more spikelet’s – which means bigger harvests.

Temperatures
Temperatures are a significant consideration when planting soybeans. Yields are negatively affected where temperatures rise above 30°C. Extended periods of temperatures below 13°C during the flowering period, will prevent flower and seed formation.

Ideally temperatures should be at 15°C at time of planting with the expectation they will rise to norms of 25°C.

Rainfall requirements of soybeans
Good yields are achieved in regions where normal rainfall averages between 500 mm to 900 mm. Too much rain at the flowering stage will cause the plant to grow prolifically and produce excessive foliage. High levels of moisture can also result in ‘lodging’. (Lodging is the bending over of the stems near ground level of grain crops, which makes them very difficult to harvest, and can dramatically reduce yield.)

Soil
Soybeans are well suited to heavier soils. They like fertile soils which are deep and well drained. The soil needs to have a good water holding capacity but interestingly, the soybean plant is able to take up and use water from greater depths than many other plants, including a maize plant. This means they are a little more drought tolerant.

They can adapt to soils with lower pH levels better than other legumes but pH lower than 5.2 limits nitrogen fixation. Thus, the ideal pH range is 6 to 6.5. Soybeans do not thrive in compacted soils. Farmers who need to address this problem would consider using rippers or a deep vibroflex process. 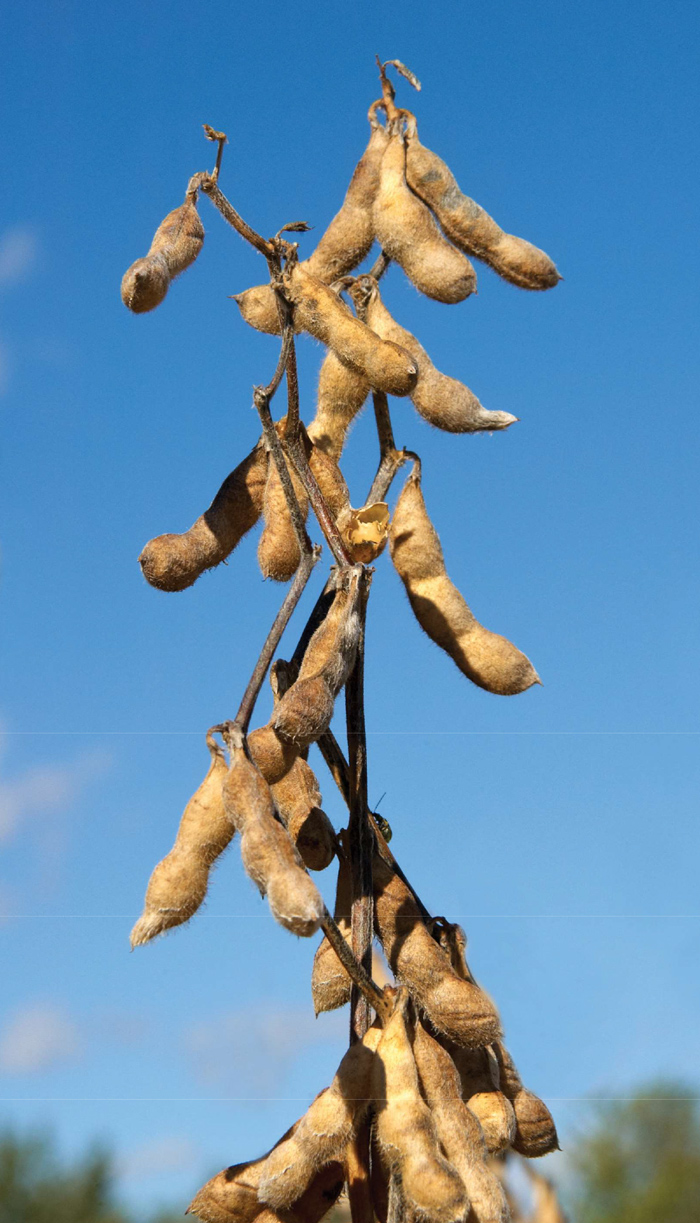 Did I hear you just ask: ‘What is nitrogen fixation?’
Nitrogen (N) needs to be available in the soil at all times, as it is a very important nutrient for the production of new leaves, new roots and new shoots in any plant. Nitrogen fixation describes a natural process by which legumes work in harmony with a group of microorganisms or bacteria living in their roots. These bacteria draw nitrogen from the atmosphere and fix it into the plant by concentrating it in pink root nodules on the root system. These nodules release nitrogen back into the soil which is beneficial to the next crops to be planted in that field.

Cultivars
Constant cultivar improvements are the result of ongoing research. Farmers need to talk to seed company representatives and local agribusiness extension officers to learn which cultivars are best suited to the region. A challenging problem in the industry has arisen because the soybean is a self-pollinating crop. Therefore, it has been possible for farmers to keep some of their crop to use as seed to plant the next crop. On the other hand, it is also true that Roundup Ready cultivars and GMO seed have made a big difference to yields which means the farmers are now more readily looking to invest in fresh new, quality seed.