The exponential growth in oilcake and oil demand has been driven, to a large degree, by increasing demand for animal feed, which in turn, has been spurred on by an increase in demand for high protein food – especially within the growing middle class.

South African soybean production has responded positively to these changing demands, and for the first time ever, the country’s production is projected to reach 1 million tons in the 2015/2016 season.

Despite the increasing levels of soybean production, South Africa still imports considerable amounts of soybean oilcake and oil, and there is still scope to further increase production in order to substitute these imports.

In fact, South Africa’s domestic soybean production is a third of the country’s crushing capacity. In this article, we briefly explore the soybean market structure by reflecting on production, consumption and trade trends.

Soybean is produced throughout the country, with significant production in the Free State and Mpumalanga provinces. South African soybean production has varied throughout the years, remaining mostly above the domestic demand (Graph 1). However, as from the 2012/2013 production season, demand exceeded production due to an increased demand from the newly established crushing plants (Table 1). 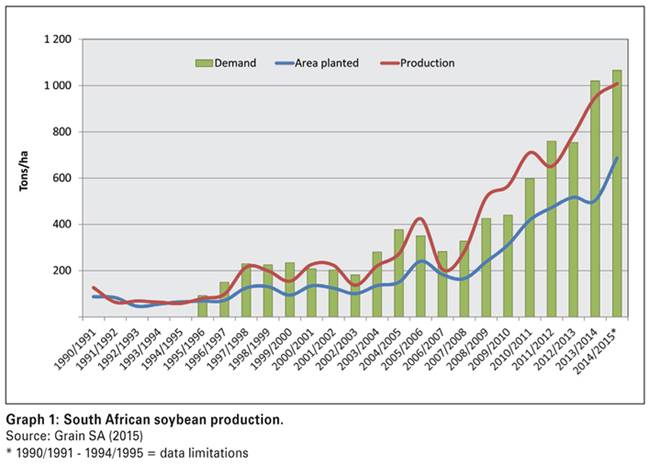 Production increases intensified between the 2011/2012 to 2014/ 2015 production seasons, growing by 55%. This followed a 46% increase in the area planted. The significant production increase in these particular years was mainly driven by an additional demand of 1,7 million tons of capacity in the crushing plants, leading to an estimated 2,3 million tons of total domestic crushing capacity (Table 1). 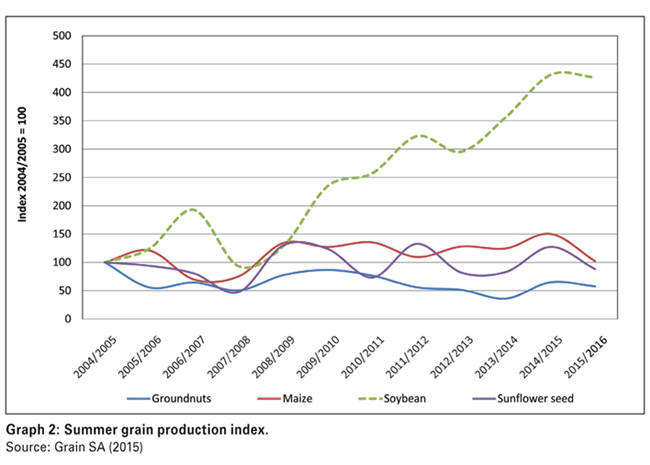 Over these years, soybean yield levels did not show any significant changes. National yields averaged at around 1,21 tons/ha. It is worth noting that the crop increase in 2015/2016 would have possibly been higher than the estimated 1 million tons production, as the area planted increased with 37% year-on-year. However, these gains were overshadowed by the current drought conditions.

Soybean is mainly consumed in three forms, namely: Food, full-fat, crushed oil and oilcake. Crushed oil and oilcake has shown a significant increase in the past twelve years – currently estimated at around 880 000 tons. The full-fat and food consumption stabilised at around 142 000 tons and 26 000 tons respectively. These figures signal the increasing demand from the feed industry.

Graph 3 depicts these increases in a twelve year consumption index. It is important to highlight that the crushing plants or soybean processors are not currently functioning at full capacity and domestic soybean production is still well below the estimated capacity. The country would have to double its estimated production in order to reach full capacity. 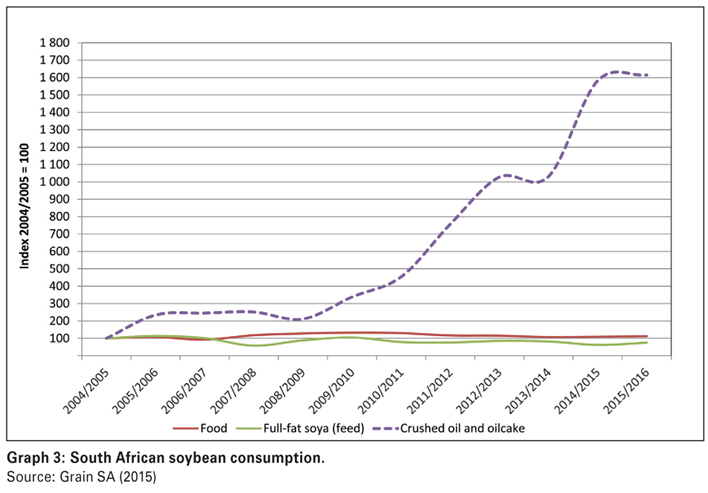 However, that would affect the price movement and profitability of the crop. For the current season, Grain SA forecasts soybean imports at 170 000 tons, which is 65% higher than the previous season and the highest import estimate in the past twelve years.

South African soybean imports are estimated to be at the highest levels in years due to an increasing demand in the processing industry. However, imports of soybean oilcake have been decreasing. 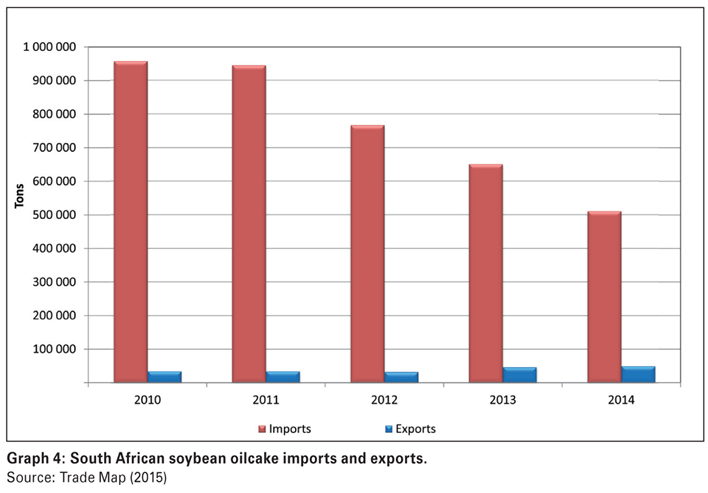 From 2012 to 2014 South African oilcake imports decreased by 33% – falling within the period when some of the new crushing plants became operational. The import decreases shows positive results from the investment made in pursuing the import replacement governmental strategy.

Nonetheless, South Africa still imports significant amounts of oilcake. The 2014 oilcake imports amounted to 511 014 million tons, which is a 41% share of domestic consumption (Graph 4). The leading suppliers to South Africa were Argentina, with a share of 99% (506 900 tons) and Malawi with a share of 1% (2 814 ton). There is still capacity to increase production and minimise these imports.

South Africa is a small player in the soybean oilcake export market. In the past five years, the industry exported an average of 39 443 tons of oilcake. All exports went to African markets, mainly Botswana, Mozambique, Namibia, Lesotho and Angola.

South Africa also imports significant amounts of soy oil. In 2014, South Africa’s soy oil imports totalled 171 068 tons, according to Trade Map (2015) data. However, it is worth noting that this was 37% lower than the volume imported in 2010. 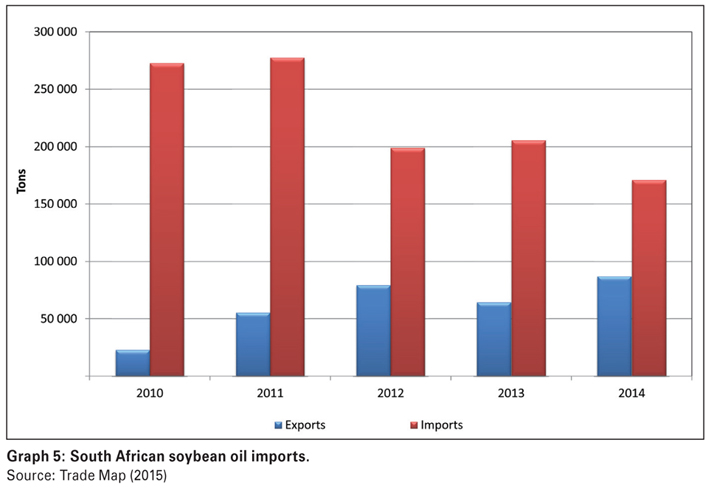 The South African soybean industry has grown significantly, but potential for further growth remains in order to meet the domestic crushing capacity. Investments made as part of import replacements have yielded positive results; imports for both soybean oilcake and oil have decreased significantly. But, there is still a need to substitute the current imported volumes.

It is important to highlight that any production increases from the current crop size might have an impact on the price levels, and consequently, the profitability of the crop. Nonetheless, the potential for growth in soybean production remains intact.