Canola and groundnuts: The past year and the one that lies ahead

Due to seed technology, favourable weather conditions and producer practices, it’s safe to say that the current moment is an important one for the entire global oilseed sector with regards to industry growth.

Not only is it an important and momentous time for oilseed due to the supply fundamentals, but also due to the demand factors through changes in consumer preferences that result in greater demand for oil and oilseed products. With particular focus on canola and groundnuts, these two oilseed crops have over the years indicated growth both locally and internationally but due to hindrances in production caused by recent drought, we saw effects which paused the upward trend. Now looking at the new seasons for both these commodities, we explore the changes that took place and what can be expected for the year ahead. 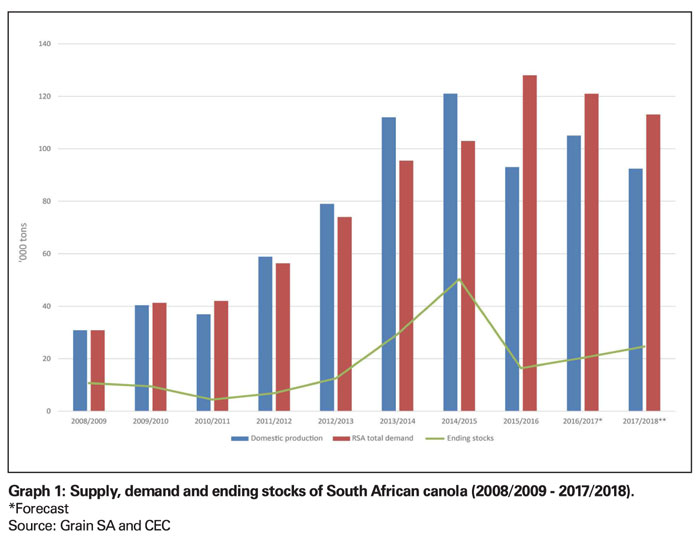 Canola
With almost 98% of the crop grown in the Western Cape, it was no surprise that the canola crop production would drop slightly from the previous year. During the 2017/2018 production season, the Western Cape was overcome by one of the worst droughts the region has ever experienced, resulting in a reduction of almost 22% of the overall winter grain across the country.

In the recent 2017/2018 production forecast reported by the Crop Estimates Committee (CEC), canola is expected to reach a total production of 92 400 tons, which is a 12% decline from the previous season. Over the years, on a long-term trend, local consumption of canola has been on a rise, particularly from the 2014/2015 marketing season which can partly be attributed to an improvement of the middle income class in South Africa.

On average, the domestic consumption of canola amounts to 112 000 tons, with about 97% of the canola estimated for crushing of oil and oilcake. Based on the current estimates, the domestic consumption is however expected to decline by 7% from the previous season, mainly driven by a decline in the demand for animal feed and crushing, representing a decline of 59% and 7,3%, respectively.

In the 2017/2018 supply and demand estimates, imports of canola are expected to reach 25 000 tons which is an increase of 20% compared to a year ago. These imports, along with opening stocks would bring the total domestic supply of canola to 138 000 tons.

On a global stance however, the 2017/2018 world production was raised sharply by the record Canadian canola production as well as Australia’s production which exceeded expectations. In fact, for the first time ever, in 2017, Canadian canola overtook wheat in terms of acres planted, placing it in line as one of the country’s top crops.

Just like local weather concerns, the Canadian Prairies was also affected by a drought. However, despite the drought in the southern parts of the country, the crop estimates managed to raise canola’s production by 1,6 million tons to a new high of 21,3 million tons, which can also be largely attributed to an increase in area planted to canola.

Another positive attribute to the sharp increase in Canadian canola production was the advanced breeding and genetic modification technology which proved the yields to be more resistant to the extremely dry weather conditions.

Such an uptick in the positive crop production and higher world production has had a negative impact on the international commodity’s prices. By December last year, the January and March 2018 futures in Winnipeg were trading marginally lower, showing a decline of around 0,3%.

Given the current fundamentals, exports are estimated at 10,8 million tons, which is a 2,5% decrease compared to a year ago. Meanwhile, the 2017/2018 Canadian canola ending stocks are estimated at 2,35 million tons, a 74% increase from the year prior. Therefore, import requirements from importing countries will be a key factor to watch this season. 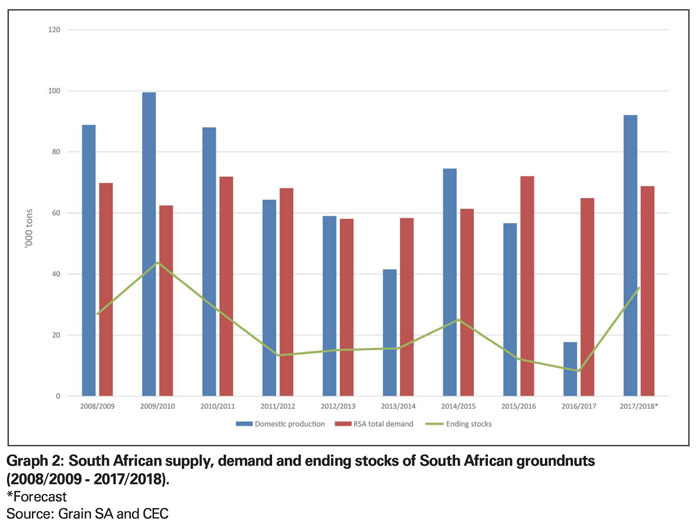 Groundnuts
During the 2017/2018 marketing year, South Africa recorded one of the highest groundnut harvests in seven years. The harvest yielded a crop of 92 050 tons, which is four times greater than production from the year prior.

Following a year which yielded the lowest amount of groundnut production of only 18 000 tons; there was certainly hope for a better season which saw the area planted to groundnuts increasing significantly to 56 000 ha up from 22 600 ha.

Looking at the season ahead, in its first intentions to plant for the 2018/2019 marketing year, the CEC has estimated that area planted to groundnuts could increase to its highest in 13 years, at 65 500 ha. However, with recent reports of drought-like conditions across the country, it still remains uncertain as to how the crop would turn out, due to the fact that the groundnut producing areas has so far received lower-than-average rain this planting season.

As we look at the 2017/2018 marketing year so far; it is clear that due to the good crop yielded that season, the country is likely to sit with high ending stocks of 36 000 tons, which indicates a surplus of 19 000 tons above pipeline requirements.

South Africa is generally known as a net exporter of groundnuts, however, even in a year with a good crop such as the current one, the country has continued to import, with imports amounting to 14 927 tons as of November last year, which exceeds the exportable amount estimated at 11 000 tons.

Of the different grades of groundnuts received so far, the crushing grade accounts for 5% for the total imports, which is a 38% decline for the same period a year ago. Meanwhile, the choice and sundries grade account for 46% and 48%, respectively. Should imports continue coming in, it is likely that the new season (2018/2019) would be met by higher opening stocks and subsequently higher ending stocks.

Based on the 2017/2018 estimates, the global ending stocks amount to 93% of USA’s groundnut production, which is generally high compared to previous years which averaged 1,8 million tons over the past three years.

As expected, ample stocks and record production have placed prices under pressure, with prices declining 16,7% between January last year and January this year. In January last year, US Runners 40/50 were quoted at 471/ton, versus the current price at the time of writing of 225/ ton.

Conclusion
Information is a very important tool that can be used by producers to make informed decisions for their production planning. This same information highlights risks that exist in the market as well as opportunities that can be taken advantage of for better decision making.

Since local prices are derived from international prices, it remains equally important that producers are well aware of both as they have an influence on domestic market factors and prices. Thus, given the discussion on canola and groundnuts as well as prospects for the year ahead, producers can determine what the best option is going forward and identify possible strategies for diversification in order to manage risk.