– for the March/February reporting period

Role-players in the grain industry was shocked on 26 February by the National Crop Estimates Committee’s prediction that the drought may lead to a decline of 31% in maize production compared to the previous year’s bumper crop.

High retail prices may impact the ultimate consumption of maize, early deliveries during March and April 2016 can decrease the need for imports and follow-up crop estimates may also significantly impact the demand for additional or less imports. In this article we give a perspective on the possible outcomes.

The Supply and Demand Estimates Committee, under the auspices of the National Agricultural Marketing Council (NAMC), followed with a press release on 4 March stating: “The current drought conditions that is widespread in South Africa’s grain production areas can severely impact on the availability of one of South Africa’s major staple foods, namely white maize, as well as on yellow maize that is crucial in the livestock industry. The availability of maize in turn affects prices of maize and hence the price of maize meal and animal feeds.”

The Supply and Demand Estimates Committee estimated that South Africa will have to import approximately 600 000 tons of yellow maize from March 2015 to April 2016. According to the Committee it is possible that the current estimated imports of yellow maize could increase to around 900 000 tons. “There are some concerns regarding white maize stocks, which, according to the estimates will be 34 days (one month), but cognisance should be taken that around 350 000 tons were estimated to be used in the industrial and animal feed market. If this situation changes, i.e. it is used for human consumption, the situation will improve, but will translate into additional imports of yellow maize.

“Thus, it is possible that the current estimated imports of yellow maize could increase to around 900 000 tons. However, market dynamics, especially the availability of international yellow maize stocks and the interplay between white and yellow maize prices, will determine the level of substitution taking place.”

The NAMC’s estimate is based on the underlying assumption that:

As stated, the drought has an impact on food security and the socio-political economic climate of South Africa. It is very important to have access to objective and reliable information, as the relentless price volatility experienced is mainly passed on to the producer. Objective information is now very important as different versions of supply and demand estimates circles around in industry and may create confusion among producers and may impact their marketing decisions.

South Africa operates on a 45 days pipeline. The 45 days pipeline number is useful to determine if it is going to be necessary to import maize in the projected supply and demand for the following year.

It is indicated for example in Table 1 that the shortfall required above the pipeline will necessitate the importation of about 1 075 000 tons in the 2007/2008 marketing year. An actual number of 1 120 000 tons of maize were imported. 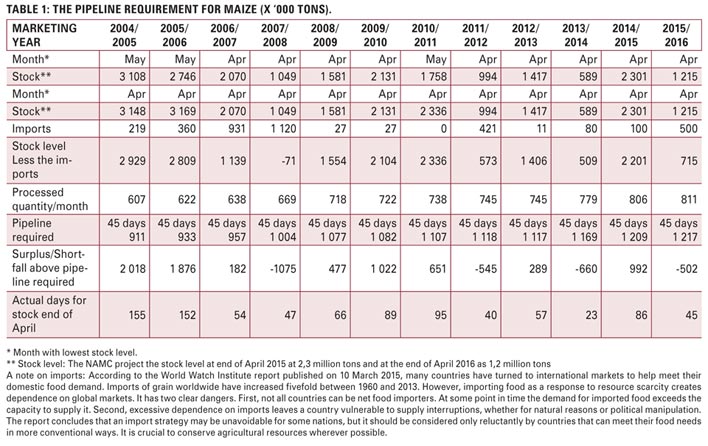 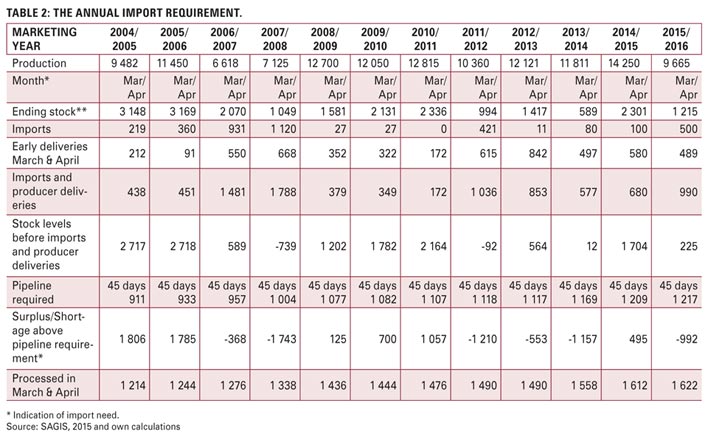 What is the impact of early deliveries during March and April on stock levels at the end of April?

The early deliveries of maize for March and April varied between 91 000 tons and 842 000 tons over the past ten years.

Grain SA took the decision to report on supply and demand factors over a marketing period which stretches from March to February instead of May to April. (See also our Supply and Demand estimates in Table 5, Table 6 and Table 7.) The main purpose of the change is to eliminate the impact of uncertain early deliveries during March and April on the supply and demand of maize. 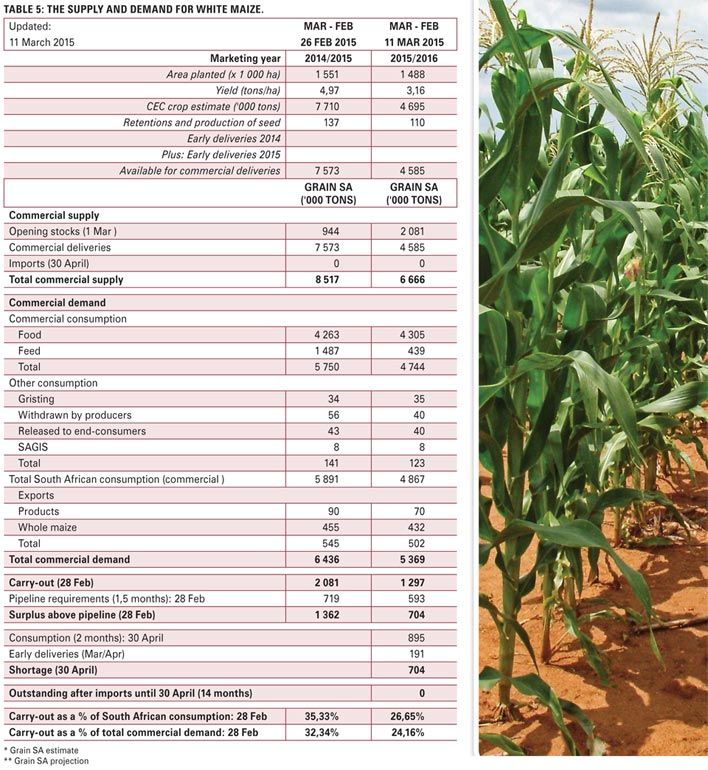 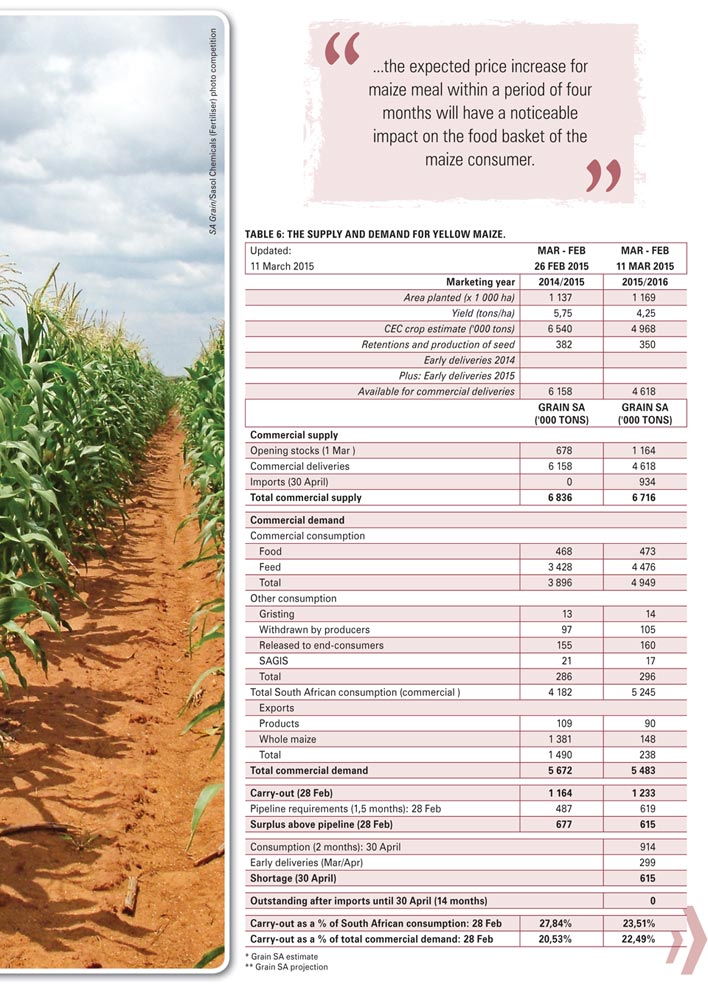 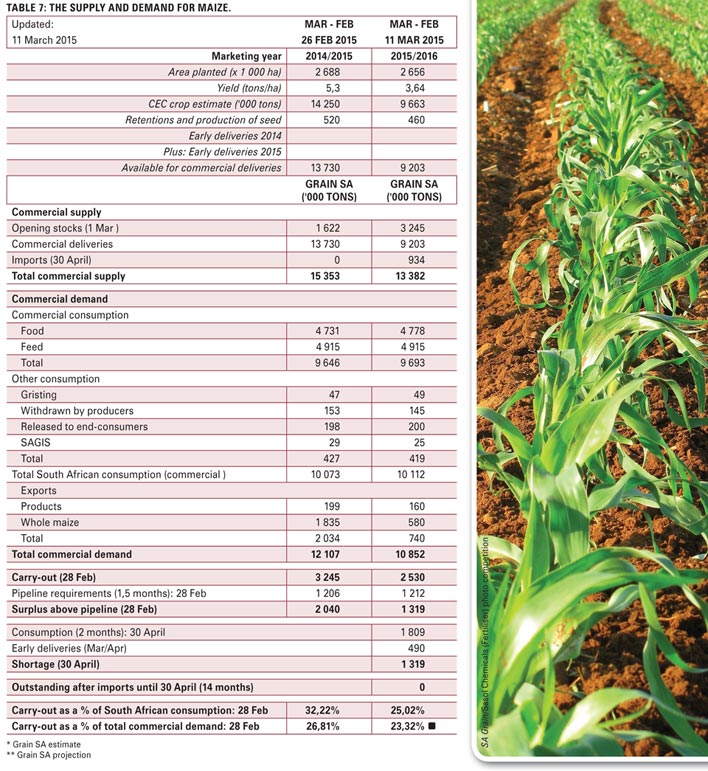 However, the following needs to be understood:

It can be graphically illustrated as shown in Graph 1. 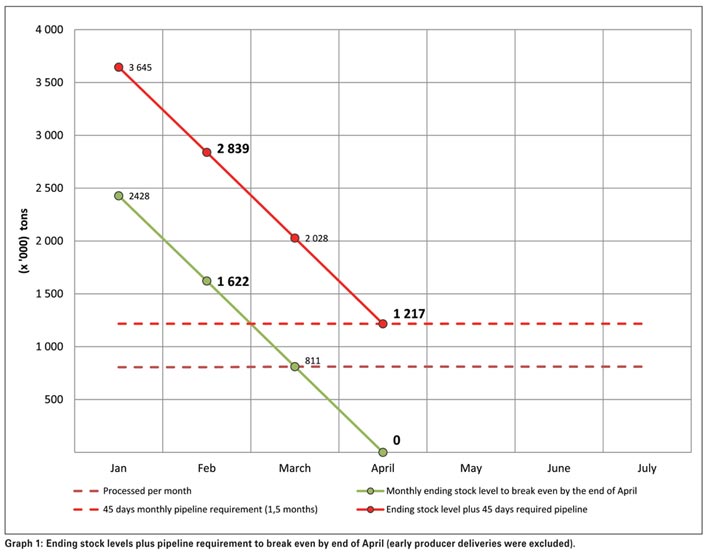 The Abstract of Agricultural Economics database indicates that South Africa’s population growth increases by 1,3% per year. SAGIS data indicate a growth in consumption of about 2,8% per year. See Table 3.

Prices of maize meal start to recover after about eight months since the price of maize started to decline. Therefore it can be expected that the increase in maize prices during February will lead to higher maize meal prices from June onwards. The limitation on available white maize for the feed market was substituted with possible yellow maize imports.

The average price in February increased to R2 553/ton due to the drought. The difference represents an increase of about R534/ton or 26%. Based on these assumptions, the price of maize meal is projected to increase between 8% and 9%. The minimum wage increase was 6%. It is clear that the expected price increase for maize meal within a period of four months will have a noticeable impact on the food basket of the maize consumer.

Yellow maize is mainly used partially as an ingredient in animal feeds. The yellow maize price increased from R2 026/ton in January to R2 317/ton (+14%) in February – an increase of R291/ton. If the same is true for maize meal in the feed industry, it can be expected that the price of maize meal will increase between 4% and 5% delivered to the animal feed manufacturer.

According to Table 3 the population grew by 1,49% p.a. between 2005 and 2012. Maize consumption increased over the same period with 3,25%. Due to the drought conditions, maize prices are fairly high and the consumption of white maize was raised with only one percentage point year on year in the Grain SA Supply and Demand.

Grain SA changed the reporting of the supply and demand information of maize from 1 May to 30 April each year to 1 March until 28 February. This was mainly done upon request of members to eliminate the guesswork about early deliveries. Due to the fact that the month during which the lowest stock levels occur is April, the import need up until the end of April still needs to be determined. Early deliveries therefore remain important. Maize delivered early during March and April, decreases the pipeline requirement accordingly and consequently the need for imports.

The expected early deliveries during March and April will alter the need for imports later in the marketing year and it will only become clear as the growing season progresses. This number fluctuated during the past ten years between 91 000 tons and 842 000 tons.

Can changes in future crop estimates and early deliveries alter the need for imports?

The first estimate was published on 26 February 2015. There is normally an estimate for each month from February until the Final Estimate in September. The eight estimates are finally concluded by a reconciliation of the crop estimate with the actual producer deliveries during November.

The average deviation in the crop estimate from the first estimate of the season until the reconciliation in November should also be considered to determine how it can impact the need for imports. An increase in the production estimate will limit further imports, while a decrease in production will increase the need to import. During the past ten years the total maize crop was underestimated in six out of ten years. The probability to underestimate the final crop size is therefore higher.

Table 4 gives the different scenarios for possible imports at future changes in production estimates and different early delivery figures. The outcomes are based on actual historic data for the past five years. It is therefore quite likely to occur. Imports during the rest of the 2015/2016 marketing year will largely be dependent on the size of the new season maize crop and its development. The follow-up crop estimates until November will receive a great deal of attention. We do not expect big differences in consumption.

Role-players will focus on the future crop estimates as it may alter the need for imports if the estimates change. As soon as the first intentions to plant are known, it can be expected that the focus will shift to the size of the expected early deliveries during March 2016 and April 2016.