Get out of your comfort zone and GROW

‘You cannot change the circumstances, the seasons or the wind, but you can change yourself. That is something you have charge of,’ the American philosopher and motivational speaker, Jim Rohn, once said. This insightful quote aligns with the philosophy behind the very successful Grain Academy Programme.

The Grain Academy is a leadership programme steered by Syngenta with the support and endorsement of Grain SA, in partnership with the University of the Free State’s Business School. It is custom-made for young commercial producers to empower them to deal with the ever-increasing challenges the South African agricultural industry faces.

The idea behind the programme is to instil a Smart Farm approach to agriculture where the future of agriculture must be shaped rather than left to chance. The aim of the academy is therefore to equip young dynamic producers with the skills to tackle the issues in the agricultural industry and to apply these new business leadership skills to their own enterprises.

An opportunity to change your life
According to Rohn – who was regarded as a major force in the world of personal development – the major value in life is not what you receive, but what you become. For the participants this path of self-discovery at the Grain Academy was less about achievements and more about personal growth and developing life skills.

Although it was a difficult journey, their feedback reflects that it was well worth it. Ms Caroline (Tshepiso) Tsosane from QwaQwa in the Eastern Free State developed an interest in agriculture during high school. She obtained a B Tech Degree in Agricultural Management from the Central University of Technology and a National Diploma in Agriculture from Cedara College. She applied to the academy to gain more knowledge about crop production as her studies focused on animal production. After graduating from the academy, she stated: ‘Growing as a leader has led to self-acceptance. I have learned that it is okay to be different and that what someone may consider a weakness can actually become your biggest asset.’

Mr Christo de Wet is the fourth generation on their family farm in the Potchefstroom area, a mixed crop-livestock farming operation. He decided to enter the academy to gain the necessary skills for the ever-changing agricultural sector. To him the programme was a time of soul-searching. ‘I learned what my good points are and what still needs attention. I have definitely walked away a stronger leader.’

A young farmer from the Northern Cape, Mr Tshiamo Moncho, had been on the lookout for an appropriate leadership course for a while when he discovered the academy. He currently farms with sheep, goats and crops on leased land in the Barkley West district and decided to diversify to vegetables in 2018. ‘The focus of our studies is always on the technical and practical aspects, while leadership skills are so necessary for success. This course showed me that problems can either be dissolved or resolved; that I must always rise above that which may destruct me by approaching difficult situations with emotional intelligence.’

For some participants this was not the first leadership course they attended. Mr Jacques Roos, the group commercial manager at the Schoeman Group in Delmas, Mpumalanga, has attended several leadership courses.

‘This one is superior – none of them are on this level,’ he said. He entered the academy hoping to be challenged by different viewpoints and to be better equipped to make a positive contribution in South Africa. ‘On a practical level, I gained a lot of skills and realised again the importance of being a bridge-builder in South Africa. We have to challenge ourselves to work together to find viable solutions for the challenges faced by the industry.’

Other feedback received by the academy from participants was that this course pushes boundaries and takes you out of your comfort zone so that one can grow. The participants added that they gained boldness and courage to take on difficult situations. One graduate said: ‘I changed from a democratic leader into a visionary leader,’ while another described it as a journey from nowhere to somewhere. It is clear that none of the participants walked away feeling let down, even though they didn’t quite realise the value at the onset. ‘At first it was a bit confusing, then the breakthrough came, and I realised how meaningful and useful it is.’

The value of the four pillars
The programme is based on four pillars: Courage, challenges, conversation and change. Socrates, the classical Greek philosopher, shared that the secret of change was to focus your energy not on fighting the old, but on building the new. All the participants realised that it takes courage to step out of your comfort zone and face the challenges and changes for growth to occur.

In 2018 the programme focused on developing leadership skills and communication, and the importance of diversity management. De Wet shared that he had not been in contact with many producers from other cultures, so to him this was a valuable experience to learn from others’ insights. ‘It was an eye-opening experience that showed me that different backgrounds, if striving for the same goal, can actually work very well together. With that, any challenge can be resolved through unity.’

‘I met people from different backgrounds who are making exceptional moves to make great contributions to the agricultural sector,’ said Tsosane.

Using messy problems for skills development
The 2018 group of 24 young commercial participants who graduated from the sixth annual Grain Academy in July this year, were challenged to deal with tough relevant issues through debate as teams.

Dr René Uys, director of Thinking Fusion, shares that these ‘messy challenges’ with which the participants were faced never have just one solution. Challenges were set to enable the graduates to mull over and then enter into debate around it. Their task was to come up with suggestions as a group which could turn the messy challenge into an acceptable option.

This year the delegates were challenged to find solutions for these relevant issues concerning the agricultural industry:

The teams were proud of the possible solutions they found for these thought-provoking challenges. Through teamwork their communication skills were enhanced as they realised that by listening to the opinions of others problem-solving becomes easier. Relationships between people from different backgrounds were developed.

A well-known life quote says: ‘Do something today that your future self will thank you for’. This is exactly what these young agriculturalists did with the help of the Syngenta Grain Academy. 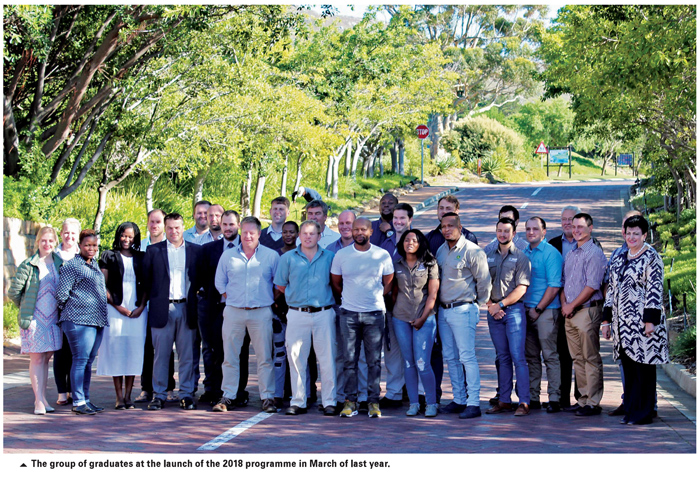