‘Outbreaks of rodents occur worldwide; the factors that cause them are less than fully understood. In Southern Africa, rodents such as gerbils can undergo population explosions or outbreaks in agricultural situations as a result of various circumstances. Abnormal population increases result from excessive food availability such as access to stored grain or animal feed, or because of wastage during harvesting.

Throughout South Africa, rodents of the genus Gerbilliscus (gerbils, nagmuis, also referred to as springhaasrotte, but not to be confused with the springhare or springhaas, Pedetes capensis, which is also a rodent) have caused concern with regards to the damage they inflict on field crops at planting.

The wide geographic distribution where the damage had been noted and reported in recent years, has also led to various tongue-in-thecheek rumours and myths. We aim to debunk some of these myths with scientific published facts, recent research observations from on-farm situations and suggestions to reduce the long-term impact of the pest.

The genus Gerbilliscus is widespread in sub-Saharan Africa and represents one of the main components of the rodent fauna of arid open habitats. The Gerbilliscus now comprises all the African species of gerbilline that were formerly included in the genus Tatera. The genus Gerbilliscus includes eleven species and is grouped into three geographically defined clades: Western, eastern and southern, based on their chromosomal and phylogenetic characteristics, with the estimated age of divergence from three to seven million years ago. 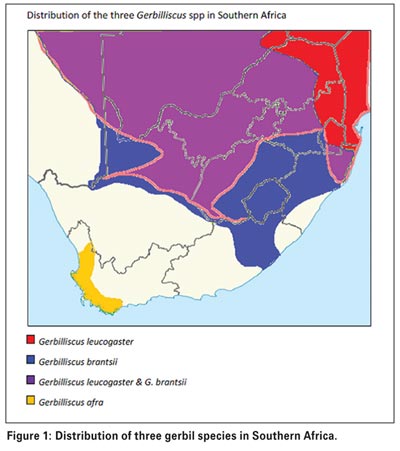 Gerbilliscus brantsii (Highveld gerbil or Hoëveldse nagmuis) (Photo 1) was first described in 1836, from specimens collected ‘near the sources of the Caledon River’ (Lesotho and eastern Free State) and subsequently from other areas. The Highveld gerbil occurs in the following regions: North-eastern parts of the Eastern Cape to the western and north-eastern parts of KwaZulu-Natal, southern Mpumalanga, throughout the Free State, Gauteng and North West Province, the south-western parts of Limpopo, in the northern half of the Northern Cape, Lesotho, Botswana and the eastern and northern Namibia (Figure 1).

Gerbilliscus leucogaster (Bushveld gerbil or Bosveldse nagmuis) was first described in 1852 from specimens collected in Mozambique, and then from almost all over southern Africa. The Bushveld gerbil is distributed widely in east and south-east Africa, Mozambique, Zimbabwe, Botswana and northern Namibia, and in South Africa in Limpopo, the North West Province, northern Gauteng, Mpumalanga, the western and southern parts of the Free State, and the Northern Cape, north of the Orange River. These two gerbils are indigenous and common to most of the summer rainfall region of South Africa.

Gerbilliscus afra (Cape gerbil of Kaapse nagmuis) is endemic to South Africa, and is confined to the limits of the south-western Cape sub-region, from Nieuwoudtville in the Northern Cape southwards to the fynbos biome in the Western Cape and eastwards to Herold’s Bay. The Cape gerbil has caused considerable damage to wheat in the Western Cape in recent years.

All three species are predominantly associated with light sandy soils or sandy alluvium, with exceptions such as hard substrate in mopane woodland and peaty soils around marshes and pans.

Gerbils are nocturnal (active at night) and entirely terrestrial (ground living, they do not climb). They excavate extensive burrow systems in sandy soils. All the gerbil species have seasonal feeding habits: During the wet season they feed on seeds and herbage and modify their diet to include insects in the dry season. They do not hoard food, but may cover seeds with sand.

Breeding is positively correlated with higher rainfall. The Cape gerbil tends to breed after winter rains. The breeding of the other two gerbil species is in the summer rainfall months between October and March, but areas delivering adequate and quality food resources during the whole year, enable these rodents to breed consistently. While the species is communal, males and females do not form prolonged associations during the breeding season. The males have a home range of about 0,5 ha.

A high degree of tolerance exists between gerbil mothers and offspring (and between siblings) leading to the formation of family groups even under high-density conditions when the habitat may become saturated. When conditions, such as food abundance and quality, favour breeding and also dispersal, females are reproductively active for longer and dispersal occurs earlier. The natural enemies of gerbils are predators such as owls (the barn owl and grass owl), snakes and small carnivores. In agri-ecosystems, the effectiveness of natural predation has been diminished by the reduction of habitat, limited breeding sites and through hunting.

The Maize Trust funded project Ecologically based rodent pest management in maize crop fields in the summer rainfall regions in South Africa focused on gerbil management research in maize, but other crops were also affected by gerbil damage, especially groundnuts.

Gerbil damage is restricted to the crop planting stage when gerbils forage on germinating seed and newly emergent seedlings. Damage was noted in maize, groundnut and soybean fields, but all grain crops may be affected.

In the Hoopstad and Wesselsbron districts of the north-western Free State during 2013 to 2015, both the Bushveld and Highveld gerbil species were trapped, with the latter the dominant rodent in the crop field, especially at the beginning of the planting season.

Both species occurred in natural vegetation adjacent to crop fields, but in thornveld where a higher diversity of rodent species was found, the number of gerbils were relatively low in both natural vegetation and adjacent crop field. The Bushveld gerbil by far dominated the gerbil species complex collected in the Ottosdal study area in North West Province during 2014/2015, while only the Highveld gerbil was found in the Bethal maize study area in the Mpumalanga Highveld at planting in 2015/2016.

In the Hoopstad and Wesselsbron study area, fields of groundnuts had a higher number of gerbil burrows throughout the season than adjacent maize fields. Groundnuts sustained high gerbil populations during the season, as food was available over a longer period; at planting, during seed formation, and at harvesting.

Where excessive wastage occurred at harvesting, food was available during the dry or fallow season (winter) to sustain large gerbil populations into the next season, affecting the follow-up crop at planting. The low bushy growth of groundnuts also provided adequate cover for gerbil burrows during the season, as was evident at harvesting when rows of burrows were exposed (Photo 2).

Fields of soybeans of which the seed pods were carried very close to the ground, thus too low for the mechanical harvester to collect and resulting in excessive wastage during harvesting, also appeared to have high number of gerbil burrows at the start of the following season.

In crop rotation programmes, where maize planting followed on groundnuts, and to some extend on soybeans, higher gerbil populations were established in the fields at the time of planting, than in fields where maize followed on other crops, but depending on wastage that had occurred at the previous harvests. In maize following maize plantings, where harvest wastage in the form of cobs and kernels was evident, relatively large established colonies that increased after planting, were noted (Photo 3a and Photo 3b). High populated areas severely affected maize at planting, necessitating replant.

Large gerbil colonies in fallow land following on maize dwindled to negligible numbers at the start of the new planting season. A maize trial planted in a fallow field had no gerbil damage in the 2014/2015 season.

To determine gerbil diet through stomach content analysis, Highveld and Bushveld gerbils were collected in new maize fields where groundnuts were planted the previous season, in new groundnut fields following on maize, and in natural vegetation adjacent to crop fields, for a period of one year.

The Highveld gerbil mainly fed on seeds at the planting, the vegetative growth stage of the crop, and at harvesting, while those gerbils collected from natural vegetation included insects in their diet in mid and late summer. The Bushveld gerbil’s diet in the maize and groundnut crop fields at planting consisted of seed and herbage, and included insects during high summer. The diet of gerbils in the new groundnut fields, consisted of seeds throughout
the season until harvest.

Maize fields where livestock grazed after harvest had lower gerbil populations and smaller gerbil colonies at the start of the new planting season, than fields adjacent not used for grazing.

Maize fields where fallen cobs were collected by hand before and/ or after harvest, had lower incidences of gerbil activity at the start of the new planting season.

At the Ottosdal study site, research on the effectiveness of barn owls in the control of rodents, ten breeding pairs of barn owls in nest boxes were monitored for a period of nine months. The ten pairs constantly occupied the nests and most bred twice in the study period. It was estimated that the ten pairs were able to consume 14 600 rodents in a year.

The Highveld gerbil and the Bushveld gerbil are indigenous and common to most of the summer rainfall region of South Africa.

Food availability during winter determined the gerbil colony size at the start of the new planting season. The food abundance in field at this stage, whether maize or groundnuts, is determined by the amount of wastage that occurred during harvest. The restriction of wastage, removal of fallen maize cobs, and grazing reduces the food available for gerbils to sustain large populations and limits the extension of the breeding season.

Encourage predators of gerbils by allowing for areas of natural vegetation, and providing breeding sites and raptor perches.

Although maize seed treatment with zinc phosphide was effective in reducing the impact of gerbil damage on maize at planting (SA Graan/Grain, October 2014), zinc phosphide cannot be used pending registration. The only alternative for gerbil control is rodenticide bait registered for the use against gerbils in crop fields. Rodenticide as burrow baiting must be applied to infested fields and headlands over a three week period with three applications at seven day intervals, preferably three to four weeks before planting, with follow-up baiting where activity persists.