Field trials conducted annually near Winterton, KwaZulu-Natal, between 2006/2007 and 2010/2011, clearly demonstrated that crown and root rot (Photo 1a and Photo 1b) of no-till maize can dramatically depress growth and grain yield. Yield losses as high as 19% were recorded.

The aim of the trials was to determine the role and importance of the different soilborne diseases that exist in the environment concerned and to evaluate the effects of possible management strategies on the impact of these diseases. This article discusses the diseases identified and their probable importance.

Numerous fungi (75 fungal species) were isolated at different growth stages from diseased crowns and roots and were evaluated under glasshouse conditions to determine their virulence or ability to cause crown and root rot and to reduce survival and growth of seedlings. 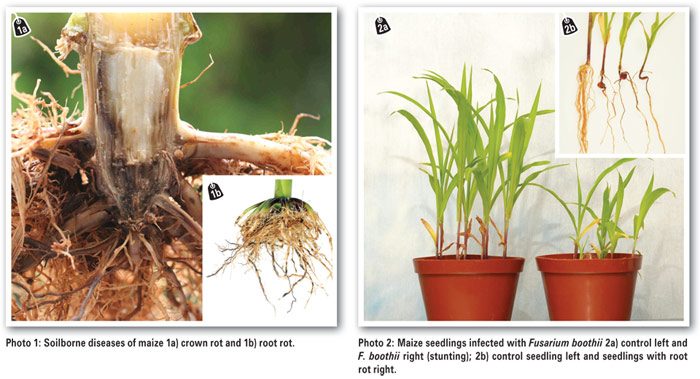 Fusarium graminearum complex
Two species within the F. graminearum complex viz F. boothii and F. graminearum are associated with crown and root rot of maize in KwaZulu-Natal. These fungi were frequently isolated from diseased crowns and roots and appear to be favoured by high soil moisture and moderate temperatures. Their incidences also significantly increased from the beginning to the end of growing seasons. Since F. graminearum is the most important scab pathogen of wheat in South Africa, double cropping of maize with wheat may increase Fusarium crown and root rot of maize.

Phaeocytostroma ambiguum
This pathogen is commonly associated with root and stalk rot of maize. The fungus can cause extensive infection of maize roots, but will not significantly affect plants under optimal conditions. Very little is known about P. ambiguum on maize in South Africa, but it is regarded as an important part of the soilborne disease complex in other countries and can cause severe losses under moisture stress conditions. In the trial in KwaZulu-Natal, incidences of this fungus increased significantly towards the end of the growing season when maize plants are often subjected to moisture stress.

Phialophora zeicola
The fungus is favoured by high soil moisture and caused very distinct root rot of maize seedlings (Photo 3). Although very little is known about this pathogen, it has been reported that P. zeicola predisposes maize to drought stress.

Pyrenochaeta terrestris
This fungus appears to be less virulent than the other pathogens. It has been shown to cause red root rot in other countries and can occur in many types of soil and survives under a wide range of conditions.

Pythium spp.
Pythium spp. appears to be mostly associated with maize seedlings, but was also isolated from roots of older plants. It is known that Pythium spp. can cause severe losses in poorly drained soils with mono culture maize and where conservation tillage is practiced. These fungi are considered major root pathogens in maize producing parts of the United States and Europe, but their importance in maize production areas in South Africa needs to be determined. Preliminary identification revealed that eight species of Pythium are associated with maize in KwaZulu-Natal.

Rhizoctonia solani
Rhizoctonia solani is mostly associated with maize seedlings and is known to cause severe disease in irrigated, monoculture maize. In glasshouse studies, the pathogen caused extensive damage to seedling roots and infected seedlings were stunted (Photo 4a and Photo 4b). 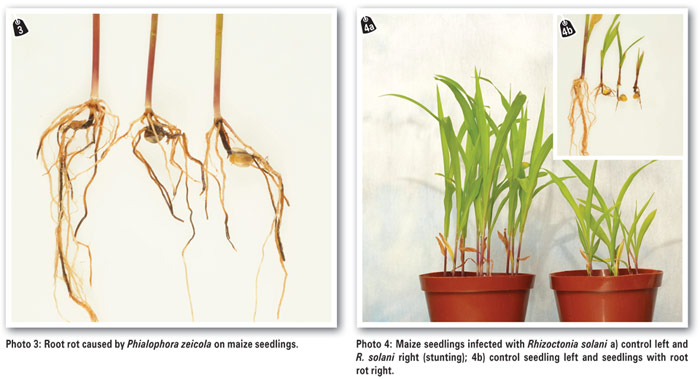 Stenocarpella maydis
Stenocarpella maydis is a well-known stalk and cob rot pathogen, and one of the most important pathogens of maize in South Africa. This fungus has been shown to infect maize roots in other countries. In the trial conducted in KwaZulu-Natal, the pathogen appears to be quite important during the later stages of the season when we isolated the fungus from both crowns and roots. The importance of S. maydis as part of the soilborne disease complex of maize in South Africa needs to be investigated further.

It is clear that soilborne diseases of maize are caused by a complex of pathogens that can affect plants at all growth stages. A succession of pathogens occurs during the growing season, with certain pathogens occurring more frequently on seedlings and others on older plants.

This information is crucial to develop a management strategy for soilborne diseases that will contribute to sustainable production of notill maize.

Other research findings from these experiments, that are currently being evaluated, are related to the effects on crown and root rot of different cultural practices (rotations, use of anhydrous ammonia, tillage, and extra straw cover), chemical seed treatments, and biological disease control agents. Some look very promising and will be discussed in subsequent articles.