Grain and oilseeds exports are a top priority for Grain SA. Grain SA received visits from Taiwan and Japan.

About 15 members of the Japanese delegation attended the meeting. Among them were Kazuhiro Kato and Yasushi Hashimoto (the general managers of Japan Feed Manufacturers’ Association) and also Professor Koji Mino from the Rakuno Gaakuen University.

The main objective of this meeting was to promote South African grain and oilseeds exports. However, more emphasis was directed on maize which is currently in high demand in Taiwan due to their lower level of production and increasing domestic consumption in Taiwan.

In the past, South Africa has exported large quantities of maize to Taiwan and also to Japan. However, South African maize exports to Taiwan dropped significantly in 2012. To a large extent this was because of the price difference between America, Brazil, Argentina and the South African maize prices that diverted most of the Taiwanese demand to these respective markets.

Graph 1 gives an indication of the 2012 top six maize supply markets to Taiwan. 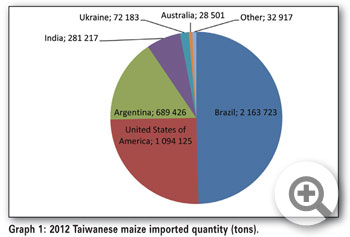 The Japanese delegation was also on the same quest of creating a close working (grain and oilseeds export) relationship with Grain SA. The results of the meeting were positive, especially for maize producers, as Japan still continues to show a strong demand for maize, specifically yellow maize. Both Japan and Taiwan normally use yellow maize for animal feed. However, white maize also has a market in both Japan and Taiwan. Issues regarding GMO were also addressed which is seen not to be a big problem for these respective countries.

Graph 2 gives an indication of the 2012 top six maize supply markets to Japan. 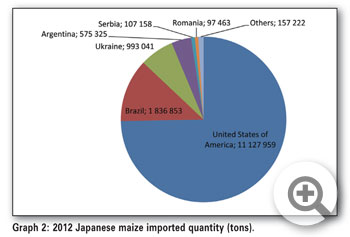 Ongoing hard work will create and ensure permanent export markets for the South African maize industry, not only in these countries, but also in other countries. Grain SA’s priority on export promotion aims to encourage the producers to continue with the production of high quality commodities to meet and satisfy the domestic and the international demand.