South Africa has been no exception – strong economic growth from 2000 to 2008, combined with increasing social grant payments, created a significant demand stimulus and as the most affordable source of animal protein, chicken consumption expanded more than any other meat type, increasing by more than 80% since 2000. While still positive over the past five years, meat consumption growth has slowed following the global financial crisis.

Consumer income levels, combined with a continuously expanding population, remain the core drivers of meat consumption over time. Hence the medium term outlook for meat consumption presented by the Bureau for Food and Agricultural Policy (BFAP) is largely dependent on the turbulent macroeconomic environment in which South Africa presently finds itself.

Consumer income levels, combined with a continuously expanding population, remain the core drivers of meat consumption over time. Hence the medium term outlook for meat consumption presented by the Bureau for Food and Agricultural Policy (BFAP) is largely dependent on the turbulent macroeconomic environment in which South Africa presently finds itself.

While the short term outlook for economic growth in South Africa remains cautious, international institutions such as the International Monetary Fund (IMF), Organisation for Economic Cooperation and Development (OECD) and the World Bank project a recovery in the longer term, with average annual growth exceeding 3% over the coming decade.

Consequently, the outlook for total meat consumption remains positive, with relative prices and consumer preferences driving the choice between different meat types over time. Projected expansion of 38% over the coming decade allows chicken to continue its dominance of the meat complex, accounting for more than 65% of additional meat consumed over the ten year period.

Beef consumption is projected to increase by 28%, resulting in almost 200 000 tons of additional beef consumed by 2024. Despite its small share in the meat complex, pork consumption continues to rise, increasing by 33%, whereas lamb, as the most expansive option, is projected to expand by 17% by 2024 (Graph 1). 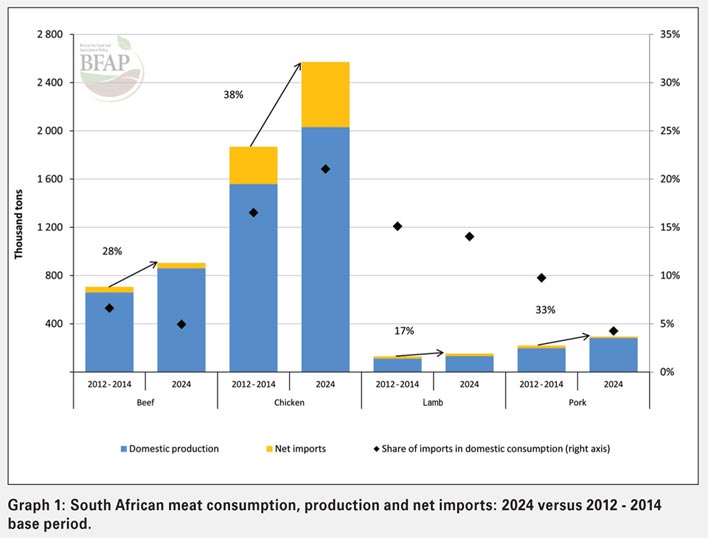 Graph 1 further illustrates that South Africa remains a net importer of meat products and in light of the projected growth in consumption, the extent to which the additional demand will be met from domestically produced products, will depend largely on the competitiveness of South African producers in the global context. Over the past decade, domestic chicken production in particular has not kept pace with the rate of demand growth and the share of imported products in domestic consumption has increased from 10% in 2000, to 20% by 2014.

The intensive use of feed grains renders chicken production particularly sensitive to high and volatile feed grain prices and hence profitability has been under severe pressure over the past three years. Maize represents the single largest ingredient in a typical feed ration and hence the chicken to maize price ratio presented in Graph 2 is often used as an indicator of profitability within the industry. 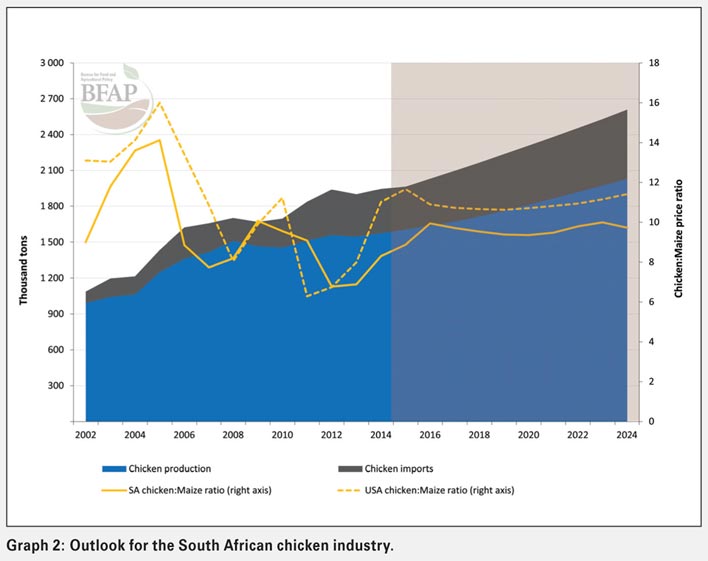 The cost of soya oilcake is however also important to consider, as it represents the main source of protein in chicken feed rations. Despite rapidly increasing soya oilcake production, a significant share of the domestic soya oilcake requirement in South Africa is still being imported. Therefore the cost of feed tends to be higher than in countries such as Brazil and the USA, which are net exporters of both maize and soybean meal.

A significant recovery in profitability has been evident globally following the decline in global maize prices, yet South African producers will again face higher feed prices than their international counterparts in 2015 due to the current drought conditions. Nonetheless, persistently high international meat prices, combined with depreciation in the exchange rate, have supported meat prices, and profitability ratios remain above the levels observed over the past three years.

Over the course of the next decade, meat to maize price ratios will stabilise at a favourable level relative to the recent past which, combined with the rapid expansion of domestically produced soybean meal, results in a projected growth of just over 30% in domestic chicken production. Despite this growth, imports continue to expand, as optimal carcass valuation and limited demand for bone-in portions in developed regions such as the USA and the EU allows such portions to be imported at very competitive prices. Furthermore, the recent agreement with the USA, which will allow 65 000 tons of bone-in portions into South Africa – free of the current anti-dumping duty of R9,40/kg – will impact on price levels and could therefore result in a marginally slower production growth outlook.

In contrast to chicken, beef production exhibits greater flexibility in the feeding system, yet production remains vulnerable to changes in weather conditions and with prices determined largely as a function of domestic supply and demand conditions, the market is often very volatile. Drought conditions in South Africa and neighbouring countries resulted in a sharp increase in production in 2013 and while a return to more favourable beef to maize price ratios in 2014 point to improved profitability, no decline was evident in slaughter numbers, indicating that producers have yet to enter a phase of herd rebuilding.

Graph 3 illustrates that historically, South African producers compete well in the global context and under the assumption of normal weather conditions and beef to maize price ratios are projected to remain favourable over the coming decade. Exports more than doubled in 2014 and while the growth is from a small base, continued depreciation of the exchange rate will likely allow South Africa to remain competitive in these export markets, supporting domestic price levels if the present foot and mouth disease free status is maintained. 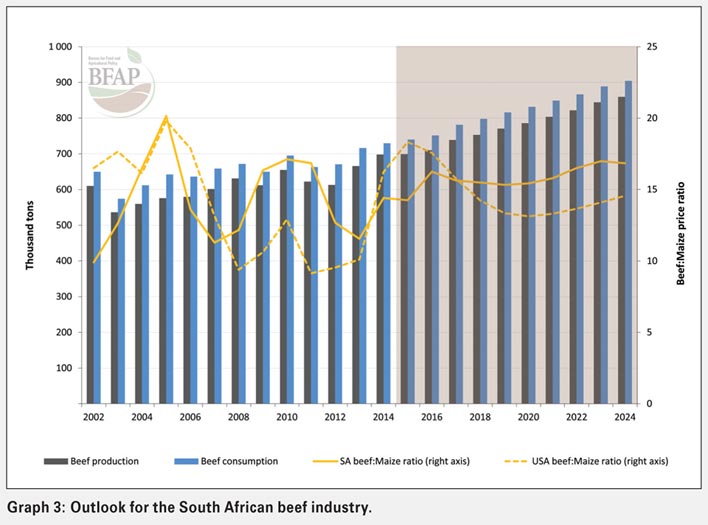 Within the context of higher prices however, the potential premium that can be obtained for extensive beef production (grass fed, hormone free) is reduced and in a cycle of lower feed grain prices, the prevalence of intensive production systems (feedlots) that convert feed to meat more efficiently is expected to increase. This trend is already evident in a recent survey conducted by the South African Feedlot Association, which showed an increasing number of smaller, privately operated feedlots entering the market, a scenario which will increase the demand for products consumed in the animal feed market.

In conclusion, the 2015 edition of the BFAP Baseline presents a positive outlook for livestock production in South Africa over the next decade, which will in turn stimulate the demand for feed products.

The medium term outlook will however always be subject to a level of uncertainty related to the macroeconomic policy and weather environment.

Consequently the baseline outlook should not be interpreted as a forecast, but rather a single possible scenario given the associated assumptions, providing a benchmark against which further exogenous shocks can be measured and understood.

Within the context of the outlook for the livestock sector, changes in economic growth assumptions, trade policy, disease status and weather conditions could potentially result in a markedly different projection.