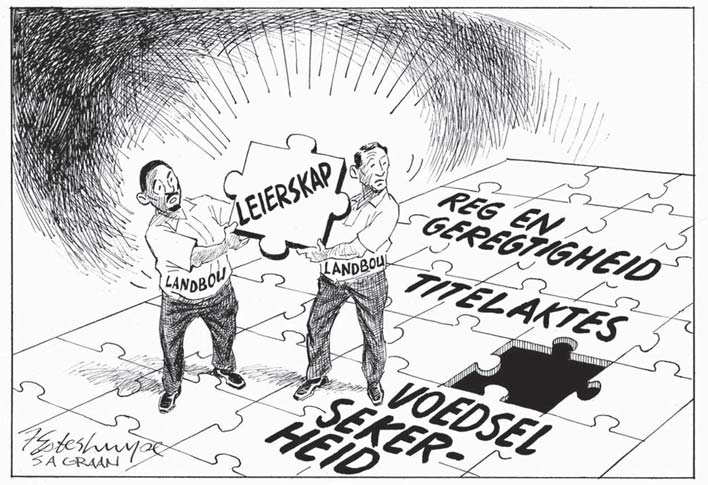 I still recall how Louw Steytler (previous chairperson of Grain SA) repeatedly in meetings reminded us of Advocate George Bizos’ words: ‘The centre will hold!”

South Africa experienced extraordinary times during October/ November 2016 and new history was made – about which our grandchildren will one day have to learn and on which they will have to take exams. The Centre has made it perfectly clear: ‘Enough is enough!’

Advocate Thuli Madonsela at last presented us with the picture of the puzzle we have been trying to build over these last few years. It is as if even the legal community attended the same meeting and as if they in one voice, started singing: Enough is enough! Even at the Annual Meeting of the African Farmers’ Association of South Africa (AFASA) I listened to our black producers taking Ministers to task about the poor service delivered to producers and no help from them during the drought. Enough is enough, they said.

Another big and new turning point was when the AFASA Congress gave Annette Steyn (the DA Shadow Minister of Agriculture, Forestry and Fisheries) the floor during the congress to reply to the question of what was going to happen to their farms, which currently belong to the state, after 2019. It was an extremely meaningful question. Steyn assured them that in such a scenario they will receive the title deeds to their farms so that they can farm. She knows that one cannot farm without security.

Another lesson I learned that day was to be where the producers are and to patiently sit through a congress until your big opportunity arrives. Too many Ministers tend to deliver speeches and to depart immediately afterward for more important matters than those discussed by producers during congresses.

I wonder what could be so important? I was so impressed with what transpired at the AFASA Congress that day that Preline Swart (vice-chairperson of Grain SA) and I joined the march of AFASA members to the Union Building the next day to ask the President of the country to give title deeds to producers so that they can farm.

Yes, he was not there. He was most likely busy with legal preparations for that which awaited him and his friends in the ensuing days. I do not know about our President, but it appears as if he and his friends misread the ‘enough is enough’ temperature.

Standing up for that which is right and good is a noteworthy event. It united people across all borders. The last time a President united us as a country, was Nelson Mandela during the Rugby World Cup Final in 2007. Never would we have imagined that President Jacob Zuma could ever unite us about anything – this time he is the reason.

At one stage I allowed myself to dream a while about how the agricultural sector could look and function if it was lead and served by the right, knowledgeable people. Man, that was a good feeling! All we need is for someone to put together all the pieces of the puzzle to illustrate the picture which has been formed over the last couple of years.

That is what leaders do. Show people a picture of a better future and they follow eagerly and enthusiastically. December definitely is a time when God also showed us His picture of redemption – Jesus. He, through His birth, came to show us how He redeems the world. Let us then use the time effectively to ponder on His picture and to better understand all the small loose pieces of the puzzle forming around us.