Earthworms and its role in soil

Earthworms are cylindrical, segmented worms from the phylum Annelida. They live in the soil, feeding on living and dead organic material. More than 2 000 earthworm species have already been identified, of which 300 species have been recorded in South Africa.

Depending on the species, a mature earthworm’s size can vary from 10 mm to 3 m. Earthworms are further classified into three groups according to their behaviour and habitat namely epigeic, endogeic and anecics.

Epigeic earthworms do not dig tunnels but live on the soil surface where they feed on rotting plant and animal material.

Earthworms in the anecic group dig deep within the soil during the day but surface during the night to feed and deposit their casts. Anecic earthworms form deep, permanent, vertical tunnels in which they move to the surface to obtain plant material on which they feed.

Earthworms cause physical, chemical and biological changes to the soil profile, which affects the habitat and activities of other organisms present in the soil system. They recycle dead plant material to compost and improve nutrient availability by pulling organic material deeper into the soil.

By ingesting and digesting organic material to form humus, nutrients are made available for plants. Their burrowing activity improves soil structure, as well as aeration and the drainage ability of the soil.

Earthworm populations are dependent on both physical (temperature, moisture, aeration and texture) and chemical properties (pH) of the soil, as well as the availability of food and the ability of the species to reproduce and distribute.

They are less abundant in disturbed soils and are typically only active when enough moisture is present. Although earthworms vary in their preferences, the majority prefers a neutral to slightly acidic environment.

For example, fertilisers containing nitrogen create acidic conditions fatal to earthworms. Expired earthworms can often be seen on the surface of soil treated with DDT, lime sulphur or lead arsenate.

On the other hand, by adding organic matter on a regular basis, their food and nutrient requirements will be taken care of and moisture content will be optimal as organic material retains moisture. Biological factors such as predators can also play a role in the success of an earthworm population because a wide variety of animals such as rats, birds, foxes, moles, snakes, frogs, snails, toads, ants and beetles feed on them. 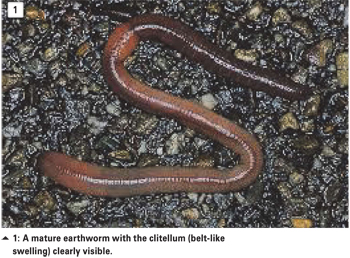 Therefore, two earthworms are needed for reproduction. Copulation between two earthworms takes place at night on the soil surface. Sperm from each worm is deposited in the other so that both can produce a cocoon containing fertilised eggs. Each cocoon produces one to 18 earthworms during favourable conditions. Under field conditions, the average lifespan of an earthworm is four to eight years.

Earthworms are wonderful little creatures that will flourish within the right conditions. Therefore, before introducing earthworms to farming or garden soil, conditions should be favourable for the survival of the earthworms. For instance, cultivated soil from older gardens are usually compacted, have poor drainage and structure and usually experience a shortage of organic matter. Furthermore, earthworms should not simply be placed on the soil surface because they will be preyed on by birds or die from exposure to the sun.

If earthworms are to be introduced into the soil, the following guidelines should be followed:

Note that although advantageous, earthworms are not the antidote for infertile soil and poor management.