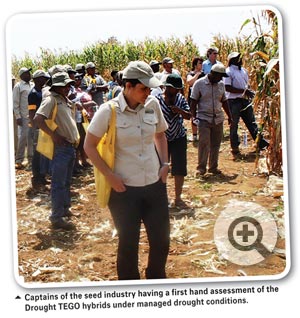 Erratic climatic conditions associated with global warming, such as recurrent droughts, are major prevalent abiotic stress factors and the greatest sources of uncertainty limiting maize productivity. Up to 96% of our country’s farms could be negatively affected by climate change in South Africa.

Accumulated research evidence over the past years indicate that maize yields in South Africa are expected to drop by up to 60% within the next century due to continued reliance on rainfed production by both commercial and smallholder farmers.

Research to unlock and stabilise the yield potential in maize to meet the challenges of climate change in South Africa, underpins the breeding work being done by the Agricultural Research Council (ARC) under the flagship project, Water Efficient Maize for Africa (WEMA).

Two drought-tolerant maize hybrids with 20% to 30% higher yield under moderate drought conditions are expected to reach the smallholder farmers during the 2014/2015 season. The hybrids were developed using conventional breeding methods in conjunction with the Doubled Haploid Technology to quicken the process of getting the drought-tolerant inbred line parents. The low cost hybrids will be available to the smallholder farming community under the trade name Drought TEGO™ – tego is a Spanish word which means shield.

WEMA is a public private partnership project aimed at developing and deploying drought tolerant, royalty-free maize hybrids in sub-Saharan Africa (SSA). The WEMA project is being co-ordinated by the African Agricultural Technology Foundation (AATF) through a grant from the Bill and Melinda Gates Foundation. It involves national agricultural research systems (NARS) in five countries, including the ARC in South Africa, the International Centre for Maize and Wheat Improvement (CIMMYT) and the private seed company, Monsanto. The other NARS include those of Kenya (KARI), Mozambique (IIAM), Tanzania (NARO) and Uganda (NARO).

The project is currently in Phase II and in addition to hybrids being developed using the conventional breeding pipeline, more robust high-yielding hybrids with drought-tolerant and insect-protected genes are expected to be released at the end of the project. The drought tolerance gene used in the WEMA project has been declared safe for humans, animals and the environment by the European Food Safety Authority (EFSA).