Genetically modified maize expressing the Bt gene, is planted in South Africa to control one of the most important insect pests of maize, the African maize stemborer, Busseola fusca (Lepidoptera: Noctuidae). This specie has been reported to be resistant to the first generation Bt maize (Bt 1) at several localities in South Africa.

However, no resistance to the second generation Bt maize (Bt 2) planted in South Africa has been reported to date. The urgent need to evaluate different African maize stemborer populations by comparing these populations’ life parameters were recognised by the ARC-Grain Crops in collaboration with the North-West University.

Larvae of the African maize stemborer were collected from a few localities across South Africa where maize is being produced. Feeding studies were conducted in which these larvae were reared on plant tissue of maize events expressing the single (first generation Bt maize) and pyramid (second generation Bt maize) proteins, to compare the fitness to that of larvae surviving on the non-Bt iso-hybrids. 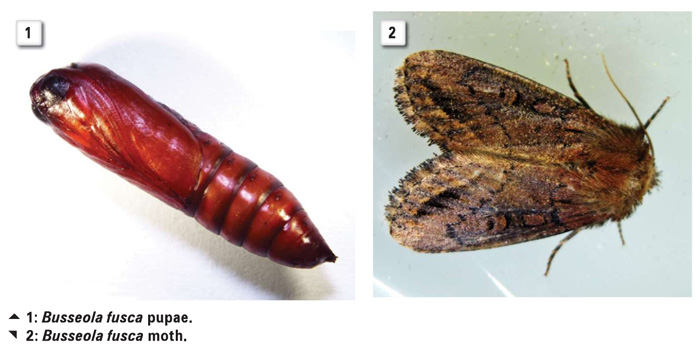 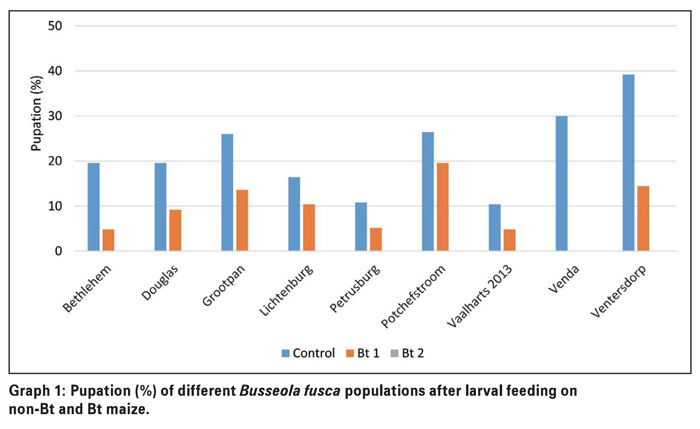 The pupation percentage of each location was determined. The highest pupation percentages were recorded for the non-Bt treatment from the Ventersdorp population (39,2%) followed by Venda (30%), Potchefstroom (26,4%) and Grootpan (26%) (Graph 1).

Pupation on the single Bt event was less successful and the Potchefstroom population had the highest pupation percentage of 19,6% (Graph 1). No pupation occurred in the Venda population on the Bt 1 treatment, indicating that this population is still highly susceptible to Bt maize. No larvae of any populations survived on the Bt 2 treatment and therefore no pupal data could be recorded. 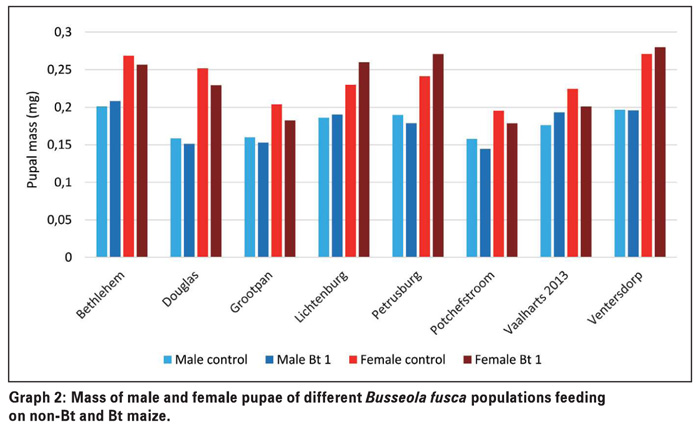 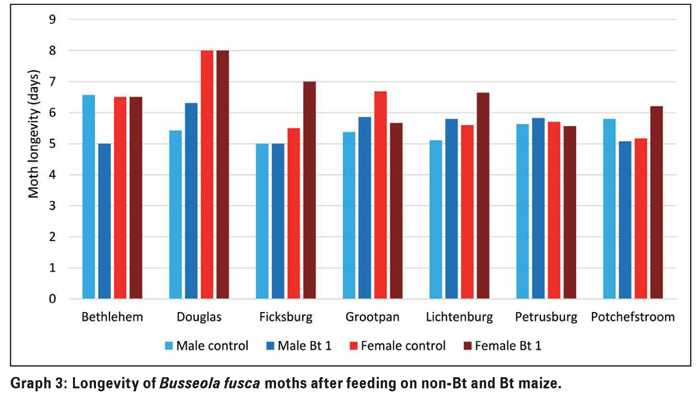 It is important to monitor these life history parameters of pupae and moths – not only that of the larval stage as described above, because of concerns about evolution of resistance due to the extensive cultivation of Bt maize.

Monitoring the fitness of all the life stages of the African stemborer to survive and reproduce provides valuable information that can be used in the management of insect resistance evolution. Since the African maize stemborer is already known to be resistant to Bt maize that express Cry1Ab proteins, it is therefore important to know if there is any fitness cost present in resistant populations.

Fitness costs could possibly play a role in resistance management strategies as it may select against resistance. This study not only provides baseline information of the African stemborer susceptibility to Bt maize in South Africa, but also other African countries. Information compiled about pupa and moth life parameters adds value to determine if the insect resistant management strategy that is used still has the power to delay resistance development.