INTERNATIONAL MARKETS
World maize production is forecast to exceed the previous record, set five years ago, with larger than average crops expected from several key growers, including the major exporters at 1,209 million tons (+7%). Demand is expected to rise by an above average 4%, with gains predicted for all demand components, which includes food, feed and industrial use.

According to the International Grains Council (IGC), the world ending stock for the 2021/2022 season will be 282 million tons, which is 2,9% higher than the previous season’s ending stock, but still lower than the three preceding seasons.

Globally, the maize picture has seen a downward trend when it comes to stocks to usage. Even though biotechnology has created healthy improvements in yields, the usage has also increased considerably from energy to industrial purposes. The fall in production has resulted in the supply/demand picture being markedly tighter in recent seasons.

At present, the global maize STU is at 25,4% (Graph 1). In theory, this means that the world has enough maize in stores to meet 25% of a year’s demand. The optimal ending stock as a percentage of consumption is approximately between 12% and 15%. End stock for consumption of less than 12% means that imports will be required. 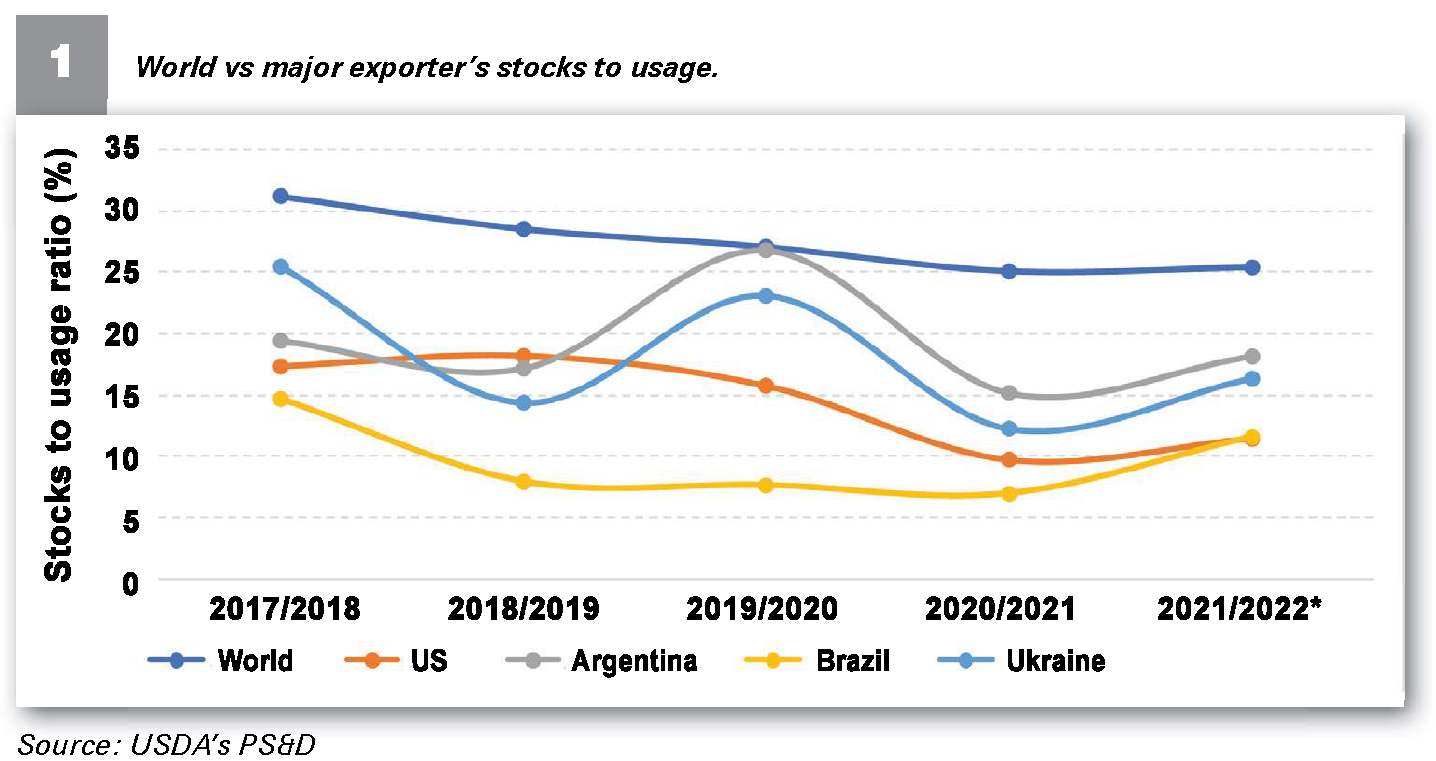 Graph 1 also indicates major exporters of maize. Ukraine and Argentina are above the 15% mark and therefore considered as comfortable, but the United States of America and Brazil are below the 12% mark and therefore indicate critically low stock levels. This a problem as they are major exporters of maize. Lower stock levels support prices, and this has been the case internationally over the past season.

LOCAL MARKET
Locally, as plantings continue across the country, weather prospects are looking good. Local demand is expected to decrease moderately by about 1,65% compared to the previous season. The projected ending stock level on 30 April 2022 is estimated at 3,3 million tons, with stocks to usage ratio at 23,97% (Graph 2). 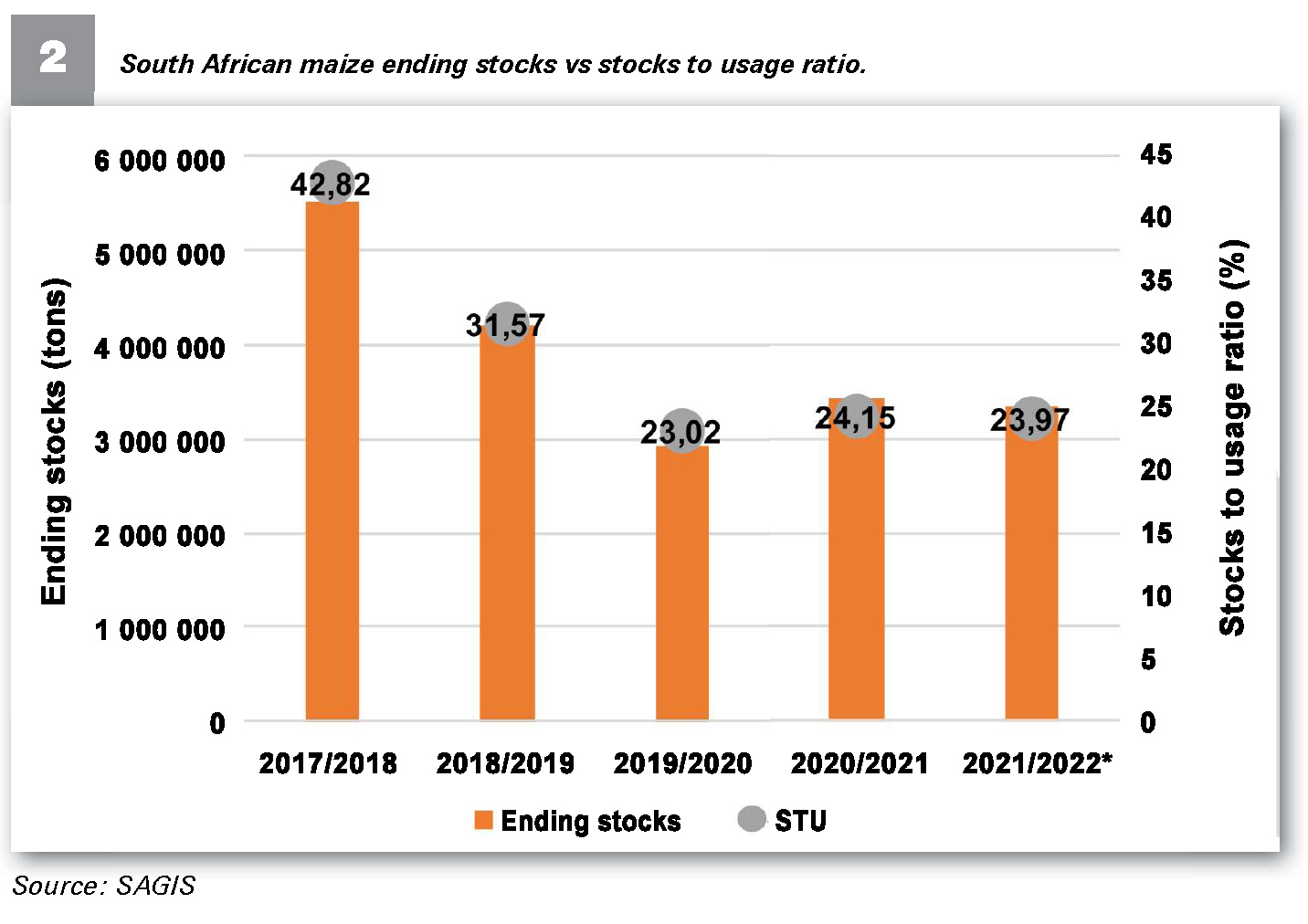 As indicated before, the percentage of local consumption is a good measure to express the size of the available stock. The optimal ending stock as a percentage of local consumption is approximately between 12% and 15%. Ending stocks for consumption of less than 12% means that the local stocks are low and may have to be imported. Given the increased production levels for 2021/2022, South Africa remains at a comfortable level in terms of stocks. Although stock levels remain good, maize prices remain high due to the support from international fundamentals. 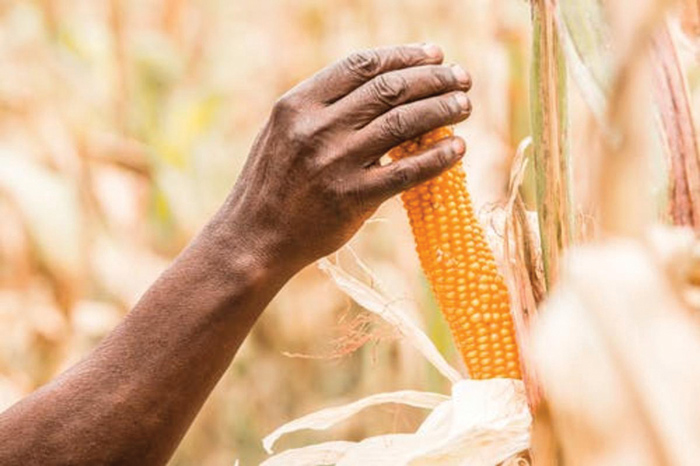