A long-term, large-scale (50 ha) crop and crop pasture rotation trial has been running at the Langgewens Research Farm since 1996. One of the major aims was to determine the effect of selected crop rotation systems on economically sustainable crop and crop/pasture production in the central Swartland.

The identified needs that were addressed in the project, that were relevant to economic evaluation of the rotation systems to be tested, included: increa-
sing crop yields; improving margins in the production system; increasing protein and oilseed production; increasing diversification of the farm for greater financial stability; and reducing input costs.

All phases of each rotation are present in each year to accommodate the effect of interannual climatic and commodity price fluctuations on crop yields and prices.

A conservation farming approach is applied to the management of all treatments that includes minimum- and no-till land preparation and planting, and retention of crop residues following harvesting (although crop residues are available to the sheep during the dry summer months in those systems that include a pasture phase).

Data from the 2002 to 2010 seasons were included in the gross margin analysis. For each year all direct and in-direct allocatable variable input costs per ha, and gross income per ha (minus marketing costs) for each crop and for the sheep component of each rotation system being tested in the trial, were recorded. 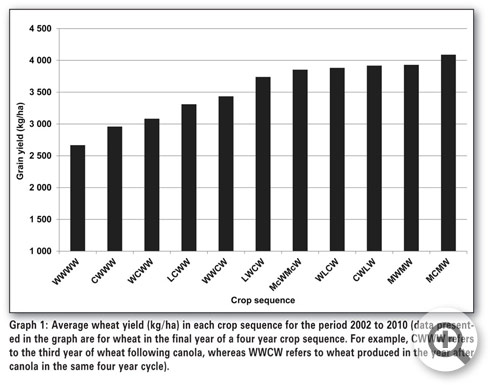 Crop sequence did not appear to have a major effect on the yield of lupin, canola and pastures, although canola production in the WWWC and WWLC crop sequences tends to be lower than for the WLWC and MWMC systems.

Improving margins
In the short term, gross margins differed among rotation systems both within and between years. In many instances these differences were, however, not statistically significant. This was, in part, due to large variations in allocatable variable costs, commodity prices and crop yields. 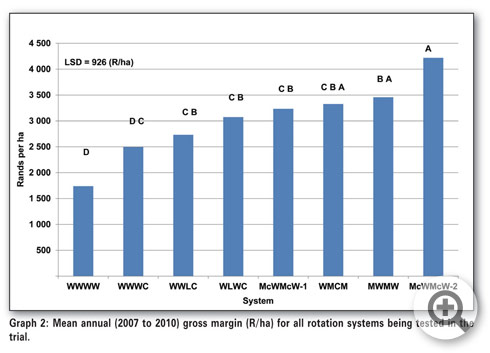 Negative or near negative gross margins for crops, as were recorded for canola and lupins in this project, often discourage the producer from including the crop into the farming system. But it must be realised that it is the rotation system as a whole that is important and our analyses show clearly that canola should be included in continuous cropping systems despite its often minor direct contribution to cash flow.

Once the farming community has gained the necessary experience on the management requirements for canola (e.g. planting on suitable soils, apply-
ing correct amounts of fertiliser at the correct time, controlling pests and applying correct harvesting methods), this crop will provide an even greater contribution to the total gross margin for the rotation system.

Increasing protein and oil seed production
The results clearly show the major positive effect on the gross margin recorded in those production systems that include alternative crops such
as canola and lupins, relative to the gross margins recorded for wheat monoculture.

Increasing diversification of the farm for greater financial stability
Reducing the proportion of land planted to wheat and diversifying production systems by including crops such as canola and lupins, and/or annual legume pastures for sheep production, increased gross margins relative to systems with 75% to 100% of the area allocated to wheat production. There was, however, considerable within-rotation system variability in the gross margins recorded among years, due mainly to the effects of climate on crop yields and, to a lesser extent, on “spikes” in input costs as well as commodity prices.

This suggests that while application of a suitable rotation system may assist in improving stability in terms of gross margins recorded on the farm, the gross margins remain relatively unstable (unpredictable) due to factors other than the rotation system applied. However, if financial stability is defined in terms of the probability of achieving, for example, a gross margin in excess of R2 500 per ha in three years out of four, then the rotation systems with 50% or less planted to wheat could be considered more stable than those with a higher proportion of the area planted to wheat. 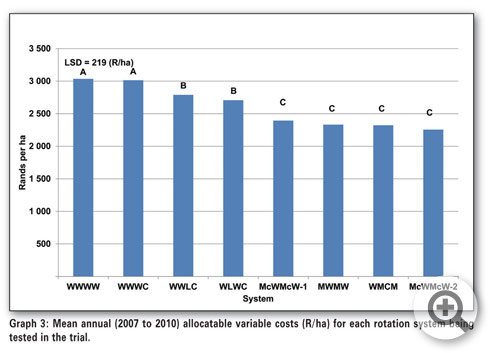 Our results are limited to the use of wheat, canola, lupins and annual legume pastures in fixed four year rotation systems. Producers should assess the potential of their land regarding which crops should be planted and in what proportion. The long-term rotation trial at Langgewens provides guidelines and principles that should assist in the planning of economically stable crop and crop/pasture production systems for each farming enterprise.

Results clearly show that the inclusion of annual legume pasture and or alternative crops such as canola and lupins into the wheat production systems commonly practised in the Swartland will, when compared to cropping systems where more than 50% of the farm is planted to wheat: