This article highlights the methods of utilising crop species that play an imperative role in conservation agriculture (CA)-based crop-pasture rotations. Besides improving the physical, chemical, hydrological and biological properties of the soil, such species, including annual or perennial cover crops, can successfully be used as animal feed.

Livestock production systems are in many ways dependent on the utilisation of forage species, or pasture ley and cover crops (used interchangeably in this article), and can therefore become an integral component of CA-based crop-pasture rotations.

To qualify as a pasture ley crop, a plant species must fulfil the requirements of a dual purpose crop, i.e. it must be functional for livestock fodder and for soil restoration.

This article focuses on the components and value of multi-camp or ultra-high stock density grazing (or so-called 'mob' grazing) as a preferred grazing strategy on pasture ley crops in an integrated crop and pasture-based livestock production system. The term 'pasture ley' can include a variety of annual or perennial species, legumes, grasses or root forage crops used in short- or long-term rotations. It is therefore important to distinguish between a short-term and long-term ley cropping system. 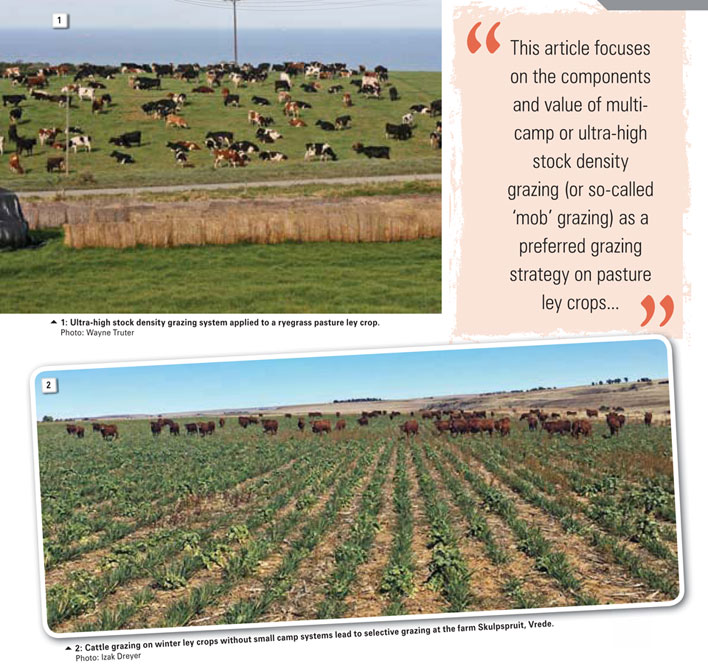 This grazing management practice is generally characterised by high stock density (i.e. number of animals/unit area) in a small camp of mature forage and short grazing periods and most importantly long forage recovery (regrowth) periods.
These grazing systems have a few key benefits and include:

So how does it work? One has to approach this grazing strategy with a large animal herd migration, such as those of the Serengeti wildebeest, in mind. The system is mimicking how huge herds of these animals used to move through an area, trampling and grazing all around them before they departed – literally – for new pastures, leaving the grasses to grow, mature and produce once more.

These animals freely grazed and never stayed in one area for too long and then moved once the area is soiled with manure and urine. These animals often did not return for months or even years, which allowed the lands to rest and recover. When these pastures are given time to rest after defoliation, new growth is stimulated and pasture quality improves.

Grass plants have evolved over millions of years under such grazing regimes and it is only during the past few hundred years that we have started using enclosures (camps) and fields, exposing the grasses to completely different grazing pressures, involving constant grazing and re-grazing of the immature plants. Grasses and other forage plants are poorly adapted to such treatments and consequently productivity is much reduced.

So when one applies this strategy, the objective of such a system will be to create smaller camps to be utilised by ultra-high stock rates for short periods and then allow each camp to rest for longer periods of time before returning animals to these camps.

Allowing plants to grow to maturity means that bulk grazers can eat bulky forage material with a good combination of fibre, protein and energy for the animals, resulting in much healthier animals. Firm dung produced by the right nutritional forage quality can be used by the producers as an indicator of good nutrition. Using this mob grazing system to incorporate animals into an arable system offer real environmental and financial benefits. 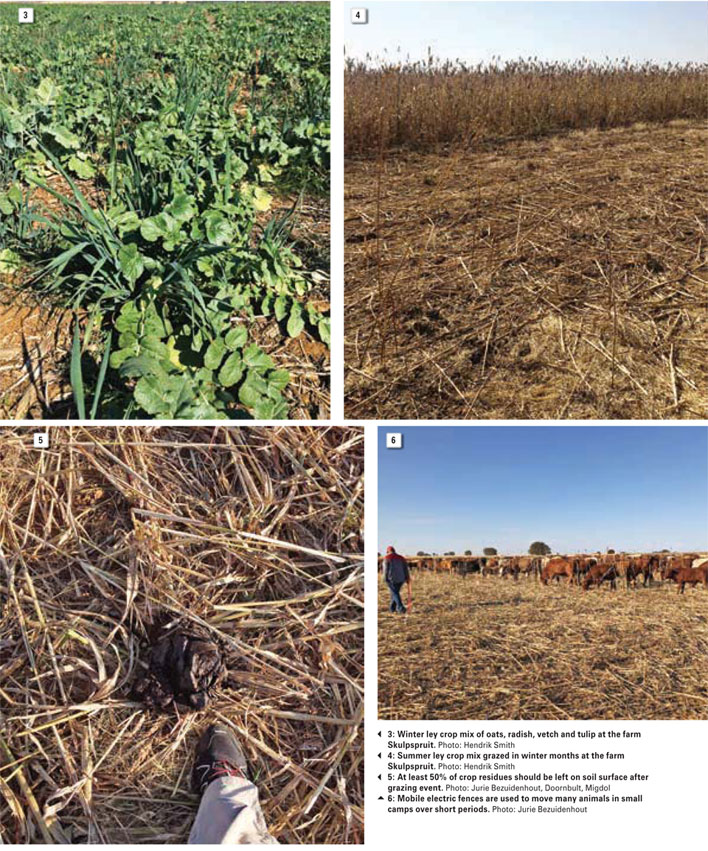 Management approach
To achieve success with such an ultra-high stock density grazing system, it is advised to determine an optimal stock density (animal kilograms per hectare). It is important to remember that the higher the density of animals, the shorter the grazing period and the more uniform the urine/manure distribution will be. This method of organic fertilisation has a major advantage compared to having to fertilise with inorganic fertiliser. The key is to utilise smaller areas of pasture and ideally have multiple daily moves to get the most out of your forage.

There are a few important holistic principles of successful ultrahigh stock density grazing management one should keep in mind, which essentially aim to combine scientific principles and local knowledge to adaptively manage animals so that the animals can influence important ecosystem processes.

There are, however, limitations when using ultra-high stock density grazing practices. Firstly, the intensity of management increases as the number of camps per herd increases.

It can be accepted that with more intensive management higher levels of commitment, organisational skills, knowledge and infrastructure are required, which may not always be readily available. The biggest challenge for implementing this grazing strategy within an existing arable system is the lack of infrastructure, such as (electric) fencing and watering points.

It is important to understand the reasoning behind ultra-high stock density grazing and why strict control is required. If livestock are given too much option of selection during grazing, the animals will selectively and repeatedly consume preferred plants and patches of vegetation. Very often overgrazing occurs, especially when individual plants are subjected to multiple and severe defoliations without sufficient recovery time. This often results in excessive amounts of biomass and litter removal, causing soil exposure and degradation in heavily grazed areas.

Ultra-high stock density grazing in a crop-livestock operation is ideally achieved by growing a wide variety of crops from all four crop types (warm and cool season broadleaves and grasses), which include cash crops (e.g. maize), as well as annual and perennial ley crops (a range of crops and systems have been introduced through a series of 26 articles in SA Graan/Grain during 2014, 2015 and 2016 [Truter et al., 2014, 2015, 2016]).

According to Lund (2015), these types of plants are called 'super plants'. Such a highly diverse cropping strategy should keep living roots in the soil as long as possible. This takes the benefits to an even higher level, implying that the harvesting of sunlight for growing crops and building soils is optimised. Soil health and function are therefore continuously (in a cycle) impacted by root exudates feeding soil microbes, which in return provides vital mineral nutrients for the plants.

By mixing crops, the resultant root exudates from the root mass feed a myriad different species of soil organisms, each adding their individual qualities to the overall soil health. For example, these root exudates are also the building blocks for soil aggregates, creating pore spaces that allow water to infiltrate and store in the soil profile; they also break disease cycles and reduce pest levels.

A long recovery time between grazing allows the plant to establish a healthy root system. Carbohydrates are stored in roots and provide the energy for regrowth post-grazing. A correct stock density will allow up to 50% of the plant being trampled to the ground by grazing animals. Animals eat the most nutritious lush tops of the plant and the energy rich seeds, while the lower stems are trampled into the soil.

Soil property benefits
When utilising the ultra-high stock density grazing system, it is essential to keep the CA principles in mind to manage for soil health.

The simultaneous application of these principles could fairly rapidly lead to an increase in soil organic matter, the key element thatThere are, however, limitations when using ultra-high stock density grazing practices. Firstly, the intensity of management increases as the number of camps per herd increases. drives soil health. Soil health is the primary factor that has an impact on pasture herbage quality and subsequently animal health and production (Truter et al., 2015).

Stocking rate vs stock density
Stocking rate means the number of animals on a farm for a period of a year, while stock density refers to the number of animals on a hectare of land at a specific time. The higher the stock density, the higher the amount of forage getting trampled onto the soil surface. Ideally up to 50% should be trampled onto the soil surface. Most producers will call this a waste, but in a CA system this portion feeds into soil organic matter that triggers beneficial soil biological processes influencing soil health. So the higher the stock density the more quickly such beneficial processes could start.

The grazing area
A simple rule of thumb is that a grazing animal will need to eat 3% of its live weight each day. So, a 500 kg cow will need to consume 15 kg of dry matter (DM) on a daily basis. If 50% of grass is used by the animals, a camp with a total amount of 4,8 t/ha DM can sustain 160 cows for one day.

During wet spells the herd impact on soil compaction can be lessened with additional camps being opened or cattle can be moved to a rocky part of the farm. If cover crops outgrow cattle demand, forage can be baled as a last option, but crops such as sweet sorghum make excellent standing hay that can be used during the winter months.

With the use of electric fencing a passage can be created which will allow cattle to reach water troughs in front of or further behind them without going across ungrazed or recovering grass.

Well-planned and well-executed ultra-high stock density grazing of annual and perennial ley crop pastures within annual cropping systems will dramatically increase soil health, leading to improved productivity and profitability, hence the long-term sustainability of such integrated crop- and pasture-based systems. For these reasons, such systems are highly suited to rehabilitated degraded soils and revive declining crop-livestock systems in South Africa.