This article is the eighth in a series of articles highlighting a specific pasture crop species that can play an imperative role in CA-based crop-pasture rotations. Besides improving the physical, chemical, hydrological and biological properties of the soil, such species, including annual or perennial cover crops, can successfully be used as animal feed.

Lucerne is also well-known as the king of hay. Palatable with a high nutritional value, but causes bloat problems when grazed uncontrollably. Of all the perennial species that can be used to provide good quality grazing and have significant soil reclamation properties, there is no better species than lucerne.

This species is most suitable to irrigated conditions, especially for hay production, but there are cultivars that can be planted under rainfed conditions more suited to grazing. 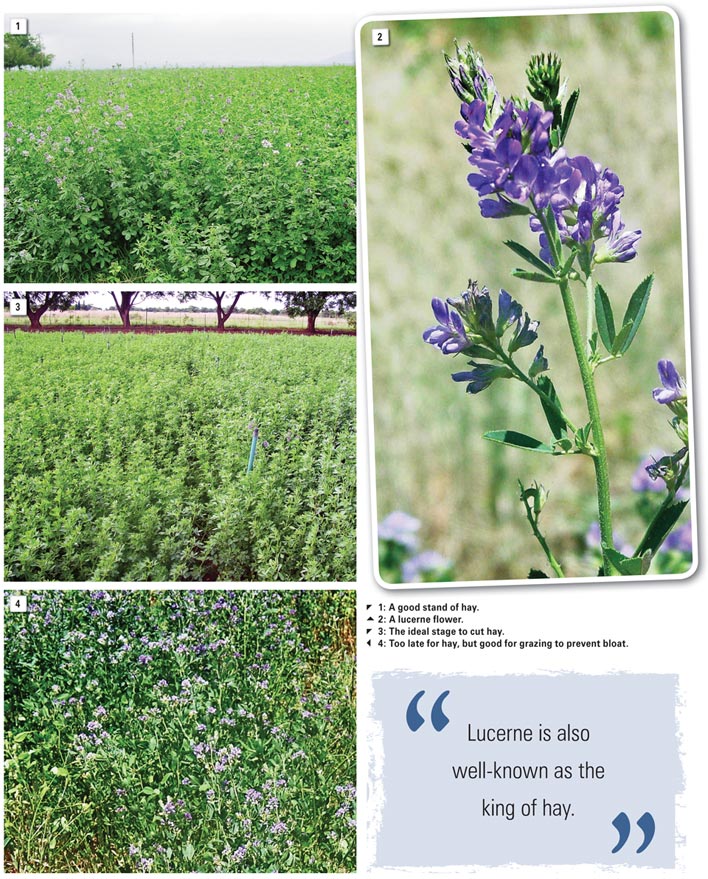 Lucerne can be divided into nine different classes according to its winter dormancy. It is adapted to a wide variety of situations, from clay to sandy soils and cold to hot areas. It survives under rainfed conditions of as low as 400 mm per annum, especially in soils with a good water holding capacity.

Lucerne cultivars are classified according to their growth activity during winter. The lower the dormancy class (e.g. Class 2), the more winter dormant and the slower the winter growth will be.

Class 9 to 11 cultivars, on the other side of the spectrum, are not winter dormant and will grow during winter. The utilisation of the cultivars is also correlated with dormancy class. The lower classes are more suitable for grazing, classes 5 to 8 can be classified as dual purpose, while classes 9 to 11 are mainly for hay production.

Use 4 kg/ha seed under rainfed conditions (in the range of 500 mm) in rows of up to 18 kg/ha under irrigation. When seeding for grazing purposes, 5 kg/ha - 20 kg/ha can be planted, all depending on rainfall and soil quality.

The best time of the year to plant is mainly autumn (February to May), as weeds germinate and grow slower in this period and less competition is expected, but it should be noted that lucerne smaller than 100 mm tall are prone to frost damage. Alternatively, lucerne can be planted in spring (August - September), which is the preferred planting time on the Highveld.

When lucerne is planted in rows, it should be done at a spacing of 600 mm - 900 mm apart. On the Highveld, rows of 30 cm are often used when the pasture is grazed by sheep. This ensures that sheep do not damage the crown of lucerne.

When planted under irrigated conditions, broadcast seeding is recommended if the seed is properly consolidated (rolled). Under these irrigated conditions, production in the summer rainfall regions is approximately 15 tons/ha, however 20 tons/ha has been reported. Often lucerne is planted in mixed pastures, and by planting it together with other species in rows, makes it easier to graze with less chances of bloat occurring.

Since lucerne is able to adapt to many soil types (excluding alkaline, brackish soils), it thrives best on deep, sandy soils.

Under rainfed conditions it grows better on soils with a relatively shallow water table of between 2 m to 6 m, but especially not on a soil that is often water-logged.

It is of utmost importance that soil analyses are conducted to ensure that the soil’s pH is in the order of 6 - 7, soil phosphorus (P) levels at least at 35 mg/kg, and potassium (K) 120 mg/kg - 150 mg/kg. It is often expected that the soils will have a molybdenum (Mo) deficiency, and it is highly recommended that Mo is provided either in a coating or pelleting process. Lucerne also thrives on soils high in calcium (Ca) and therefore this species will benefit immensely from calcitic liming if soil pH is too low.

Maintenance fertilisation is important; especially on sandy soil, K and P can often be limited due to harvesting lucerne as hay. One ton of hay removes about 20 kg of K/ton and 3,5 kg of P/ton. Grazing however recycles most of these elements back to the soil via the dung of the animals.

Lucerne as a legume has the ability to fix its own nitrogen (N). This is a remarkable characteristic which makes this plant so efficient and valuable. For this process however to be possible, it is imperative that the seed that is to be planted, is inoculated with the correct strain of Rhizobium bacteria. If this process is done correctly, the plant root will be infected and nodules will develop on the root systems of the plant and will start fixating N.

Other than producing hay from lucerne, consideration can be given to producing silage in higher rainfall areas. Haymaking of lucerne can often be difficult due to unforeseen wet and cloudy conditions, and silage however is possible under these conditions. The sugar content of lucerne is rather low and it is advisable to mix it with other crops, such as sorghum or maize and/or the additive molasses.

The highest risk that exists when utilising lucerne is the possibility of ruminants developing the condition termed bloat. This condition occurs because of a specific protein in the plant that is eventually responsible for the suffocation of the ruminant.

To prevent bloat it is advised to graze the pasture at a mature stage, provide dry hay and enough drinking water and not to graze with hungry animals. Bloat guard is also regarded as a product that can be given to animals to prevent the condition from occurring.

From a production perspective, with the intensive cropping of lucerne, disease resistance is of high importance and many of the higher dormancy types are known for this characteristic. Lucerne should never be overgrazed, as this will lead to grass invasion.

Low soil P levels are also regarded as a reason for grasses to invade lucerne fields, and one will need to make use of the herbicides available to control grass weeds in lucerne fields.

This perennial legume pasture has been successfully planted all over the country. Not only does it produce good quality roughage, but because of its deep root system, it has the ability to return a significant amount of organic material back into the soil.

This species’ most common characteristic is to capture atmospheric nitrogen and convert it into high quality plant protein which indirectly increases soil N-levels beneficial to succeeding crops.

Residual soil N in the order of 130 kg/ha to 350 kg/ha (all depending on the way the lucerne was managed) can be available for a succeeding crop.

According to Crocker (2003), growing lucerne for 3,5 years eliminates the need for fertiliser nitrogen (N) in the next five crops. Lucerne improves other factors, such as soil organic carbon and aggregate stability, compared with continuous grain and long fallow.

Lucerne is regarded as the best legume crop to be planted in South Africa, and is commonly used to produce good quality hay, especially under irrigation.

When lucerne is used for grazing purposes, the following aspects are important to bear in mind:

After establishing a typical ley crop system using lucerne for a period of around three to five years, the soil should be sufficiently restored to cultivate annual grain crops under a CA system. Herbicides kill the pasture quickly and the pasture residues remain on the soil surface providing cover that limits erosion, enhance water infiltration and reduces their rate of mineralisation.

Usually lucerne should be killed a season before planting grain crops to allow the soil profile to be replenished with water. Maize can be planted in the following summer, or grown in succession (“stacked”, normally twice) followed by a long break with a two-year legume (such as soybeans).

A suitable no-till planter should be used to plant the grain crops directly into the residues of the pasture crop, without any other cultivation practice disturbing the soil. Normal weed and pest control practices should be followed. However, due to the residual soil N-levels, the following maize crop’s N fertiliser levels could be cut with 50% for at least the following two years (i.e. in the stacked rotation).

This legume species has a proven track record, and can be used as a multi-purpose crop with significant benefits. Not only does it have the ability to improve the soil quality, it also provides a high value crop of outstanding forage quality during this period of soil reclamation.

It has no nitrogen requirements and is able to fix its own nitrogen from the atmosphere which is converted to good quality plant protein, as well as substantial amounts of residual soil N for the succeeding grain crops.

The grazing management of this species can be tricky, however; mixing lucerne with other common sub-tropical grasses, such as Eragrostis curvula and Digitaria eriantha, can provide grazing of a high quality without serious anti-quality factors.