This article is the sixth of a series of articles highlighting a specific pasture crop species that can play an imperative role in conservation agriculture (CA) based crop-pasture rotations. Besides improving the physical, chemical, hydrological and biological properties of the soil, such species, including annual or perennial cover crops, can successfully be used as animal feed.

Livestock production systems are in many ways dependant on the utilisation of pasture species, in this case as a pasture ley crop, and can therefore become an integral component of CA-based crop-pasture rotations. It is imperative however to identify a pasture species fulfilling the requirements of a dual purpose crop, i.e. for livestock fodder and soil restoration.

The Molopo cultivar is known to grow as tall as 1 500 mm. The most common cultivar available in South Africa is Molopo, named after the place of origin. The cultivar Gayndah is a cultivar commonly imported from Australia, and has shown its adaptation and potential in many parts of the country. This cultivar has a finer structure than Molopo, resulting in a more palatable pasture and better quality foggage. 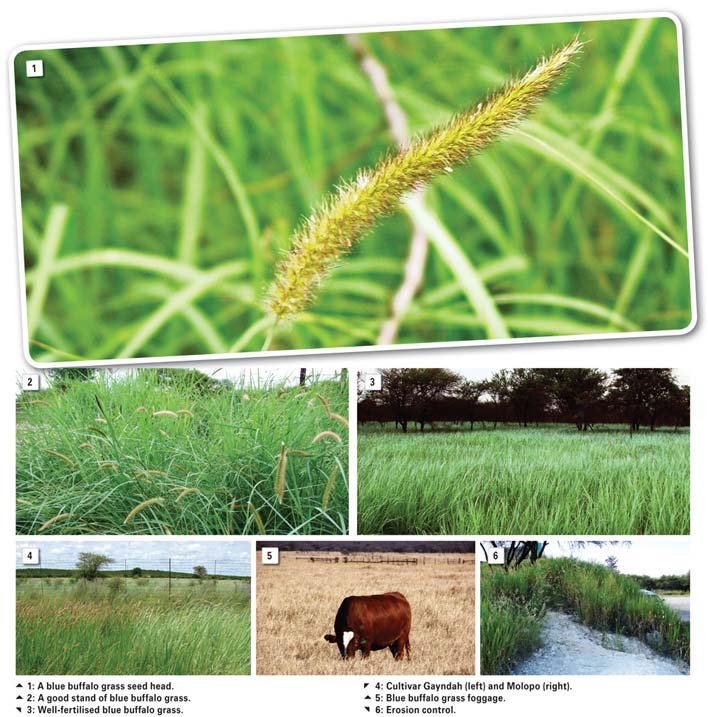 The drought resistance of this grass species is what makes this grass a good summer grazing and hay crop, especially in the drier parts of the country. This species has the ability to survive in areas that receive as little as 300 mm of rainfall a year.

Blue buffalo grass grows well on most soil types except light, sandy soils. Some heavy soil types are suitable as well, however, the establishment of this species on these soils are difficult, and often the risk of drowning for this species is evident on such soils.

Soil types with pH’s below 5,5 are not suitable for the establishment of the grass, unless lime is applied to rectify the pH. Research has further indicated that blue buffalo grass does not establish well on soils with a low phosphorus (P) content, resulting in poor seedling survival.

The establishment of blue buffalo grass can often be a major challenge. Diligence and patience is of the essence when planting this species. The soil should be cultivated well, preferably 300 mm deep in the autumn of the previous year, or as early as possible in the year of planting.

Lime can be applied if needed at the same time as cultivation to ensure uniform incorporation. Light discing is recommended to preserve moisture as far as possible, to control weeds and to maintain a firm seed bed by the time of planting. Superphosphate can be applied before the final preparation of the seedbed to ensure soil phosphorus (P) content of approximately 15 mg/kg - 20 mg/kg of soil.

The establishment of blue buffalo grass is a delicate process. In the environmentally suitable areas of the country it is suggested that this species is planted at the end of January to the middle of February. Earlier plantings are possible, but weed control can often be a problem. The best time for planting is when the rainfall events are frequent and reliable. It is imperative that freshly harvested seed is not planted, as the seed requires nine to twelve months after harvest to become ripe. It is recommended that certified seed is used to protect the buyer as well as the seller.

Pelleted seed can be planted at seeding rates of 5 kg/ha - 8 kg/ha. A very important determinant for the successful establishment of blue buffalo grass is the method used to establish the grass.

The three methods used for establishment are:

The fertilisation of blue buffalo grass needs to be aligned with the amount of moisture received. For instance, in the drier western and northern parts of the country, where low rainfall is evident, it is critical that fertilisation rates are adapted.

Blue buffalo grasses’ popularity has increased and can often be seen in the central and eastern parts of the country, especially the Lowveld regions along the roadside. The fertilisation rates will therefore be determined by rainfall and fertiliser prices.

Fertilisation during establishment is important, and lime will not necessarily ensure significantly higher yields, however, raising the soil pH to above 6, will facilitate optimal assimilation of nutrients required for growth and resistance to growth limiting factors. It is imperative that the phosphorus (P) content of the soil should be sufficient, since research has shown that blue buffalo grass seedlings have a high P requirement.

If general fertiliser recommendations are adhered to, it will not be necessary to fertilise P within three years. The following year’s superphosphate can be applied to maintain the soil P content at 15 mg/kg soil and above. In highly productive areas, it can be beneficial to split P applications between spring and summer.

With regards to nitrogen (N) fertiliser recommendations, it often very difficult to obtain a clear recommendation since it is largely dependent on the rainfall being the determining factor. A very common recommendation based on research findings at Mara Research Station, ranges between 40 kg - 100 kg N/ha for an area receiving a rainfall of
400 mm - 800 mm.

These applications can be split over two periods. With the production of hay, and the resultant high removal of potassium (K), K will need to be applied regularly in the form of potassium chloride (KCl) at a rate of 50 kg - 100 kg K/ha.

One of the most important factors that determine the quality of the blue buffalo grass is the age of the material since the last harvest. The older the material, the less acceptable the hay will be for the animal.

Digestibility and therefore nutritional value will decrease substantially as the plant becomes more mature. For these reasons, the farmer should try to cut hay every six to eight weeks (approximately 750 mm tall).

Higher hay yields can be obtained, but possibly with lower quality if intervals between harvests are longer, therefore less harvests. The quality of hay cut at the correct stage, can be sufficient to maintain dry and pregnant cattle during the winter months.

With respect to grazing, animals tend to graze the leaf material more selectively than the stem. If the animals are forced to eat the stem material, it can be expected that an insufficient amount of feed will be available and will negatively affect animal production.

A good practice to revitalise grazed blue buffalo grass pasture is to aerate the pasture with a tined implement every two to three years depending on the soil texture and the moisture content of the soil. A clay soil is less dependent on this practice than most other soils, and it is advisable to apply this practice when soils are not too dry.

Blue buffalo grass is a species that is widely adapted and has the ability to grow in various soil conditions and can optimally use all the resources available to it. Since it is well adapted to drier conditions, it becomes very attractive to use this species to rest soils and restore soil quality under extreme climatic conditions.

With the amount of dry matter produced under variable moisture conditions, this species has the ability just as many other subtropical grasses have, to lower the soil temperatures which facilitate further seed germination, as well as preserving moisture from soil evaporative loss. This preserved moisture is rather used for plant growth which will ultimately contribute to organic matter which can partly be used for animal feed, decomposed to soil organic matter and then also be a competitor for unwanted, worthless weed species.

It is generally known that blue buffalo grass can become unpalatable the older it becomes and especially when it grows out too tall. At this stage too many thick stems develop which the animals avoid when grazing.

Animal production on blue buffalo grass can deliver live weight gains of 140 kg/ha – 185 kg/ha and can go up as high as 345 kg/ha. Many researchers and authors recommend that this species only be used for young growing animals for the most economic results.

On the other hand hay production can be as low as 2 tons/ha in lower rainfall regions, however yields of up to 12 tons/ha in high rainfall regions have been obtained. With a six to eight week regrowth of blue buffalo grass, that has been fertilised well, crude protein values of up to 12%, crude fibre values of 35% - 50%, and a digestibility of 55% - 65% can be achieved.

As part of an animal production system, it is important to have alternative uses for pasture species and blue buffalo grass has the potential to also be used as a foggage. This species can therefore retain some quality in winter to maintain animal weight with the supplementation of a winter lick.

In the North West and central parts of our country where grain crop production is prominent, blue buffalo grass can typically be used in a cropping system for a period of around five years. After this period, the soil should be sufficiently restored to cultivate annual grain crops under a CA-system.

Herbicides kill the pasture quickly and the pasture residues remain on the soil surface providing cover that limits erosion, enhance water infiltration and reduces their rate of mineralisation. Once a decision is made to terminate the ley, all pasture components should be considered as “weeds” that need to be removed. They should no longer be regarded as a source of fodder for livestock.

Depending on the pasture species and situation (e.g. dry or wet area), the pasture could be killed a season before planting grain crops to allow the soil profile to be replenished with water. The water requirement of the first crop planned after pasture will influence the timing of removal of the pasture.

Reliable and timely seasonal rainfall forecasts may assist in this planning. Following the pasture phase, grain crop yield will be restricted unless the soil water profile is replenished. After removing the pasture, weeds in the fallow must be controlled to conserve soil water to maximise the benefit of the ley.

A suitable no-till planter should be used to plant the grain crops directly into the residues of the pasture crop, without any other cultivation practice disturbing the soil. Normal integrated fertiliser (based on soil fertility levels and yield targets), weed and pest control practices should be followed.

Cenchrus cilliaris (blue buffalo grass/bloubuffelsgras) is regarded as one of the best pasture species adapted to dry and wet conditions. It has the ability to produce good quality pasture if managed correctly.

As with many other sub-tropical species, this species can also be mismanaged and then provide very little value at all. With good establishment, rainfall and fertility (irrespective of how much), this species can offer fantastic grazing and high quality hay for animal production, while restoring the soil for future grain production.