This article is the fifth in a series of articles highlighting a specific pasture crop species that can play an imperative role in conservation agriculture (CA) based crop-pasture-rotations.

Livestock production systems are in many ways dependant on the utilisation of pasture species, in this case as a pasture ley crop, and can therefore become an integral component of CA-based crop-pasture-rotations. It is imperative however to identify a pasture species fulfilling the requirements of a dual purpose crop, i.e. for livestock fodder and soil restoration.

Guinea grass is a weak perennial grass (two to five years) that is indigenous to Africa. The growth form of this grass differs immensely, as certain ecotypes hardly grow taller than 1 m, whereas other ecotypes grow as tall as 2,5 m. Many ecotypes are strongly tufted and others have a more creeping nature.

As a result of the latter classification, this species is divided into two main groups:

This species is also known to be a very palatable grazing species. It produces a very good foggage and can in some instances remain green in winter, especially in frost-free areas. Hay can be made from this species under the correct management, but it could easily produce a better quality silage. 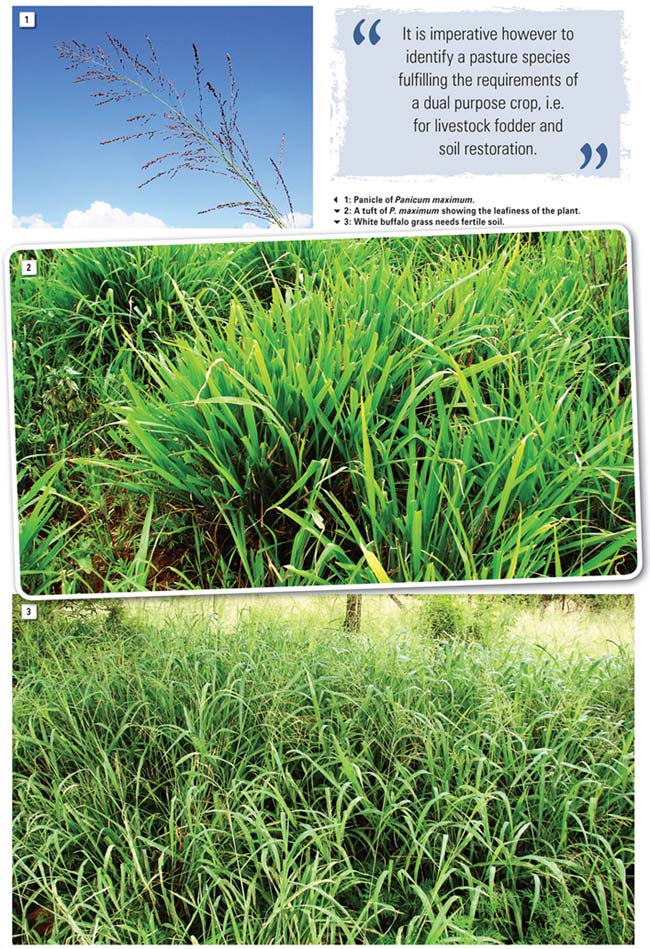 White buffalo grass is also known as a good grass species to grow under trees, but can occur in open grassland areas too. Due to the large variation in ecotypes, it is accepted that this species is well adapted to many areas.

It is noted that this species can grow in as wide an area as from the Limpopo province to the Eastern Cape. To date, a large percentage of Panicum maximum is imported into South Africa, and many questions regarding the adaptability of imported cultivars remain unanswered.

The following observations can be confirmed to a large extent: Gatton, currently the most available cultivar in South Africa, has been doing well in areas such as Potchefstroom, and is therefore cold-resistant and requires an average rainfall of approximately 550 mm – 600 mm per annum. This species particularly thrives in slightly more humid climates, such as the Lowveld regions of the Limpopo province.

A fine to firm seedbed is required and the establishment is recommended to be done during October/November or additionally the month of February. Good quality seed is a major requirement. If this species is to be planted in rows, seeding rates of between 2 kg to 4 kg seed/ha can be planted.

If planted using a broadcasting method, the seeding rate should increase to 6 kg - 8 kg seed/ha. If this grass is to be planted under irrigation practices, then seeding rates can be increased to 10 kg/ha.

White buffalo grass is known to be planted well in mixtures with other palatable grasses, such as Smutsfinger grass, Rhodes grass and bottle brush grass. It can also be planted together with leguminous species such as lucerne, which will ensure a higher quality grazing and hay production.

In higher rainfall areas and even under irrigation, levels of up to 150 kg N/ha can be required.

The phosphorus (P) status of these soils planted to this species should be in the order of 15 mg/kg - 20 mg/kg soil, and if potassium (K) shortages of less than 80 mg/kg soil are noted, potassium chloride (KCl) should be used to increase these soil K-levels.

Very little is known about the potential value of existing cultivars and ecotypes of this species, especially under different environmental conditions. A tremendous amount of research is required to be done regarding the best management and utilisation practices for this species.

There is evidence that white buffalo grass reacts best to mild defoliation, and that frequent defoliation below a height of 10 cm can negatively affect the regrowth potential of this species. Correct rotational grazing with the emphasis on grazing height and frequency of defoliation in addition to the maintenance of good soil fertility, will ensure a high quality pasture with high yields over many years.

Yields of up to 20 tons/ha under irrigation have been obtained. Dry matter yields of between 6 tons/ha - 14 tons/ha, however, are more realistic. This depends on many factors, such as rainfall, climate and soil quality.

In order to ensure good production of this species, it is important to have the correct amount of rainfall or irrigation. It is however sensitive to water-logged soils, and if irrigated, it should be on soils that are well-drained. If planted in dry areas, it is important to plant the species in 1 m to 2 m wide rows.

Medium to high annual fertiliser applications are essential to ensure high production as well as the survival of a stand of white buffalo grass, especially in sandy soil. Red soils (Hutton types), have proven to produce good stands of Guinea grass, heavy soils however, not as good, and sandy soils should more likely be avoided. Regular overgrazing (below 10 cm height) can significantly reduce the lifespan of this grass.

It is difficult to make hay from this species, as it produces high volumes of material which dries out slowly and preferably requires a mower with a crimper and significant windrowing to prepare it for baling. When hay is made from this species, it offers high quality. This species can contain an anti-quality factor such as oxalic acid; it can occur under stressful growing conditions and horses are for instance sensitive to high values.

Research has shown that white buffalo grass has the ability to grow on saline soils. As with Rhodes grass, it is important that soils that are often planted to grain crops and especially under irrigation, can be cropped in rotation with white buffalo grass.

This practice will help reduce the impacts of high salinity caused by excessive irrigation. Not only will this grass grow on these saline soils, the species will assimilate some of the salts, which will contribute to the inherent palatability of the species. The excess levels of remaining salts will be leached from the root zone while the perennial pasture is being irrigated over time.

This species is known to have a relatively good grazing capacity of one to two livestock units (LSU) per hectare. An additional advantage of this grass is the good nutritional value during winter, which confirms its foggage value. During winter, this species can have a digestibility value of approximately 45% with a crude protein content of at least 6%. One of the main reasons for this species to retain its quality in winter is due to the fact that the carbohydrates and other important nutrients are stored in the aboveground plant components and not the roots like many other species do.

In the summer it can be expected to achieve digestibility values of anything between 53% - 62% with a crude protein value of a minimum of 6% - 11%, whereas some studies have noted crude protein values of up to 20% - 23%, under intensive fertilisation and irrigation practices.

After establishing a typical ley crop system using white buffalo grass for a period of around five years, the soil should be sufficiently restored to cultivate annual grain crops under a CA system. Herbicides kill the pasture quickly and the pasture residues remain on the soil surface providing cover that limits erosion, enhance water infiltration and reduces their rate of mineralisation.

Depending on the pasture species and situation (e.g. dry or wet area/season), the pasture could be killed a season before planting grain crops to allow the soil profile to be replenished with water. In certain situations/areas, an annual legume could be planted directly after termination of the ley crop, such as grazing vetch (Vicia villosa) as a winter crop or soybeans (Glycine max) in the following summer, followed by maize (Zea mays) in the crop rotation.

The water requirement of the first crop planned after pasture will influence the timing of removal of the pasture, especially in the dryer, western grain production regions of South Africa. Reliable and timely seasonal rainfall forecasts may assist in this planning.

Following the pasture phase, grain crop yield in dryer regions will be restricted unless the soil water profile is replenished. After removing the pasture, weeds in the fallow must be controlled to conserve soil water to maximise the benefit of the ley. A suitable no-till planter should be used to plant the grain crops directly into the residues of the pasture crop, without any other cultivation practice disturbing the soil.

Normal integrated fertiliser (based on soil fertility levels and yield targets), weed and pest control practices should be followed. During the transformation phase, after newly established CA grain fields (e.g. during the first five years after termination of a ley crop), a 30% increase in N-fertilisers is recommended on maize, due to the immobilisation of N in the soil.

White buffalo grass is definitely a sub-tropical grass species that shows tremendous potential in South African integrated crop and livestock production systems. Not only does it produce high yields and quality grazing, it has the potential to produce good quality foggage and silage, and is essential in any fodder flow programme, unless the climate and rainfall restricts its use.

This species also has the ability to be grown on saline soils and provides the opportunity to rest and help restore cropping lands under irrigation systems. Although it should always be kept in mind that proper nitrogen fertilisation should be done and the phosphorus and potassium status of the soil has to be as suggested earlier.