This article is the third in a series of articles highlighting a specific pasture crop species that can play an imperative role in conservation agriculture (CA) based crop-pasture-rotations.

Besides improving the physical, chemical, hydrological and biological properties of the soil, such species, including annual or perennial cover crops, can successfully be used as animal feed. Livestock production systems are in many ways dependant on the utilisation of pasture species, in this case as a pasture ley crop, and can therefore become an integral component of CA-based crop-pasture-rotations.

In 1924 General Jan S. Smuts identified a group of Digitaria plants on his farm Doornkloof near Pretoria and brought this under the attention of Miss S.M. Stent, a taxonomist in the Department of Agriculture.

According to Smuts, this group of plants differed from other finger grasses in the area because of its acceptability by animals. Material collected from these plants brought upon a new species namely Digitaria smutsii.

The grazing value of D. smutsii became very popular (early 1930’s) under the influence of research done by Drs Pentz and Pole-Evans. In 1981 the botanical name of this grass became Digitaria eriantha cultivar Irene, which is still available today. 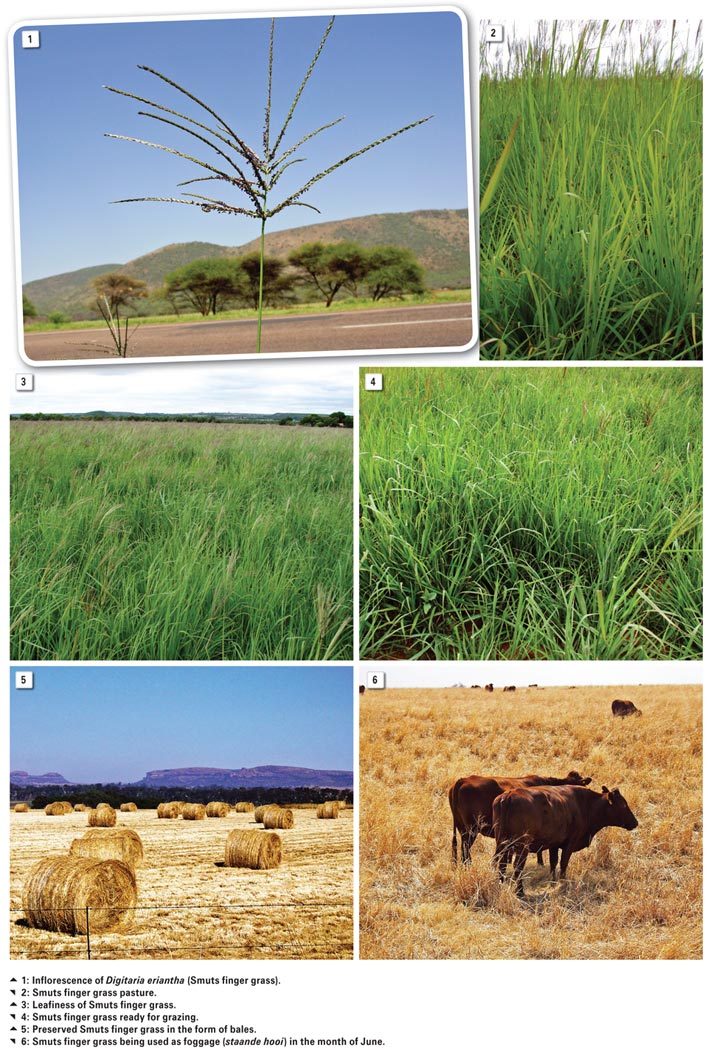 In the early days it was commonly planted in the districts of Pretoria, George, Rustenburg, Kroonstad, Grahamstown, Vereeniging, Cedara (KwaZulu-Natal), Potchefstroom, Kokstad, Ermelo and Bloemfontein.

One of the reasons for its popularity is its adaptability to a variety of climatic and soil conditions. Although it will survive rainfall conditions of as low as 450 mm per annum, it is mainly grown in cooler areas with a rainfall of 550 mm and higher. This grass is also known to survive frost and will grow on almost any soil.

Because of Smuts finger’s fluffy seeds, it should be established in a well-prepared, fine and firm seedbed. Proper rolling before and after seeding will benefit germination and establishment. Establishment can be done with pure Smuts finger grass seed, at 4 kg/ha to 7 kg/ha, or in mixtures. The popular Potch-mixture can be planted in different combinations:

Smuts finger grass is a grass type which can be strategically used in the growing and dormant seasons of a fodder flow programme. The inherent palatability, regardless of being fertilised or not, is ideally used as a green pasture in the summer growing seasons and undoubtedly as a foggage (staande hooi) in winter. It can also be used as a hay crop and for seed production.

Smuts finger grass is often used as a foggage in the autumn and early winter months; especially when the veld is shortly grazed and the maize residues are not available yet. Other than just using Smuts finger grass to relieve the pressure on the veld, the production of the grass can be manipulated through the fertilisation, depending on the expected dry matter requirement during specific times of the year.

An important condition for using Smuts finger grass as foggage is that the pasture has to be rested from mid-January for the rest of the growing season. If this pasture is to be fertilised before it is used for foggage, then mid-January is also the most suitable time to do this.

Rotational grazing with high grazing pressure is essential to optimally utilise Smuts finger grass, especially with sheep. Cattle can however utilise this pasture efficiently using a continuous grazing system. If Smuts finger grass is fertilised well, year old weaners or slaughter lams are the most profitable group of livestock to be kept on such pastures.

Smuts finger grass is regarded as a very good hay crop, particularly with regards to the palatable leaves and stems. The grass however, cannot be cut, dried and baled on the same day, as these processes take a bit longer than Eragrostis curvula for instance. If these aforementioned processes are completed before being spoiled by rain, then extremely high quality hay can be produced.

The production and grazing capacity of this grass depends greatly on the soil type, fertilisation level, rainfall and management. A common growth trend is noted for Smuts finger grass, where it starts growing around the middle of October and stops growing in March/April.

The most active growth stage is the middle of November until the end of January. The growth distribution on a percentage basis is as follows: 15% for November, 35% for December, 28% for January, 12% for February, 6% for March and 4% for April.

As can be seen, most management activities such as cutting, baling and fertilisation need to be conducted in December/January if this pasture is to be used as a dual-purpose pasture. This is however in the middle of the peak rainy season, which highlights the evident management challenges. Even though this pasture crop is grown on a variety of soils, it will not survive waterlogged conditions.

Dry matter (DM) production values of as high as 12 tons/ha to 18 tons/ha has been achieved under optimal climatic conditions and good fertilisation practices. The common production values expected for summer rainfall areas in the western parts of the country where the rainfall is between 400 mm - 800 mm per annum, can be as low as 1,5 tons/ha to 7 tons/ha.

For optimal production under grazing conditions, it is imperative that Smuts finger grass should never be grazed shorter than 50 mm from the soil surface. A rest period of 30 to 60 days is essential for sufficient regrowth to occur before the next grazing cycle.

The grazing capacity of Smuts finger grass can vary between areas receiving different rainfall, and can be anything between 0,5 - 2,5 mature large stock units (LSU)/ha. The digestibility of this grass can vary between 60% - 65% in the summer and drop to as low as 40% in winter. During the growing season a crude protein content of between 12% - 22% can be achieved with good fertilisation and rainfall, but can however be as low as 5% in winter with no attention.

Smuts finger grass is a highly recommended pasture ley crop for shallow and stony soils. The major limitation to this recommendation is that the grain cropped land will need to be removed from crop production for at least five years since this grass establishes slowly.

Even if Smuts finger grass is known to establish slowly, the primary value of this pasture is endless, particularly from an animal nutrition perspective as provided by hay, foggage, silage and summer and autumn grazing. It is often noted that the secondary value of such a pasture lies in the higher degree of soil nutrient build-up through animal dung when highly palatable and nutritious pastures are grazed.

With the increased occurrence of degraded natural veld, Smuts finger grass can also be regarded as an important grass to be used to reinforce such poor quality veld. As previously mentioned, this grass has an inherent palatability and a wide adaptability which makes it a suitable grass to interseed into degraded areas.

After establishing a typical ley crop system using Smuts finger for a period of around five years, the soil should be sufficiently restored to cultivate annual grain crops under a CA system. Herbicides kill the pasture quickly and the pasture residues remain on the soil surface providing cover that limits erosion, enhance water infiltration and reduces their rate of mineralisation.

Depending on the pasture species and situation (e.g. dry or wet area), the pasture could be killed a season before planting grain crops to allow the soil profile to be replenished with water. The water requirement of the first crop planned after pasture will influence the timing of removal of the pasture.

Reliable and timely seasonal rainfall forecasts may assist in this planning. Following the pasture phase, grain crop yield will be restricted unless the soil water profile is replenished. After removing the pasture, weeds in the fallow must be controlled to conserve soil water to maximise the benefit of the ley.

A suitable no-till planter should be used to plant the grain crops directly into the residues of the pasture crop, without any other cultivation practice disturbing the soil. Normal integrated fertiliser (based on soil fertility levels and yield targets), weed and pest control practices should be followed.

Smuts finger grass is regarded as one of the best quality and adaptable grasses in South Africa. Even though it takes some time to establish properly, it will always be known as one of the most profitable pastures in a long term ley cropping system. It is a strong perennial pasture, with a vigorous root system which can ultimately improve soil quality and contribute to livestock and grain crop profitability and sustainability.