This article is the second of a series of articles highlighting a specific pasture crop species that can play an imperative role in conservation agriculture (CA) based crop-pasture rotations. Besides improving the physical, chemical, hydrological and biological properties of the soil, such species, including annual or perennial cover crops, can successfully be used as animal feed.

Livestock production systems are in many ways dependant on the utilisation of pasture species, in this case as a pasture ley crop, and can therefore become an integral component of CA-based crop-pasture-rotations. It is imperative however to identify a pasture species fulfilling the requirements of a dual purpose crop, i.e. for livestock fodder and soil restoration. 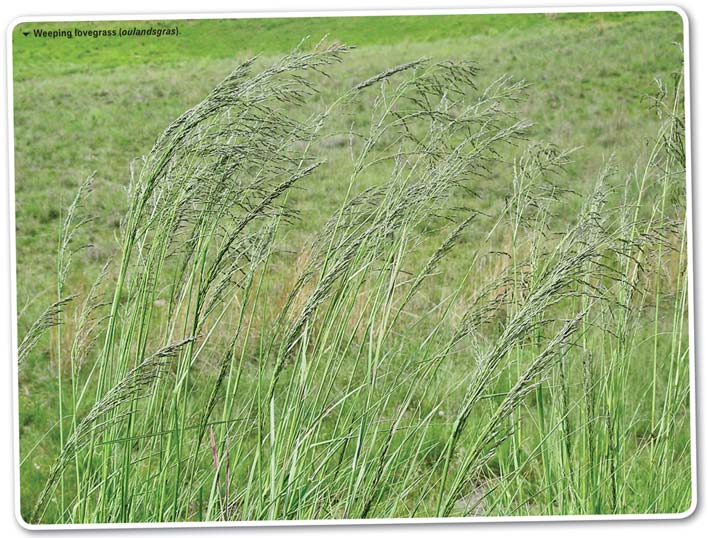 Weeping lovegrass were planted early in the 1930’s in KwaZulu-Natal. It was popular because of its ability to grow on relative infertile soil, such as old crop lands, and this gave birth to the Afrikaans name of oulandsgras.

During the Second World War all pasture research came to a halt, but after the war, weeping lovegrass seed were collected on the farm Welgelegen, near Ermelo. This seed was then planted and evaluated on several experimental farms of the Department of Agriculture and henceforth the cultivar, Ermelo, became known.

The Ermelo cultivar is still the most popular, and is used extensively in the colder Highveld areas of South Africa. The reason for its popularity is its ability to adapt to a variety of climatic and soil conditions. Although it will survive in rainfall conditions of as low as 450 mm, it is mainly grown in cooler areas with a rainfall of 650 mm and higher. It can survive severe frost and will grow on almost any soil, even on sandy soils with a low pH. One condition it is not adapted to is wet, waterlogged soils. There are various cultivars registered in South Africa, and they include Ermelo, Agpal and PUK 436. American leafy is an American cultivar that is often imported as well. The Ermelo cultivar is the commonest cultivar and most proven to be a very good hay crop, while PUK 436 has the ability to stay green later into the autumn and is therefore better known for its grazing potential.

Since weeping lovegrass have very fine seeds, it should be established in a well-prepared, fine and firm seedbed. Proper rolling before and after seeding will benefit germination and establishment tremendously. Establishment can be done with pure weeping lovegrass seed or in a mixture with annual Eragrostis tef (teff). The best time for establishment is November/December or in February if broadleaf weeds are a problem.

When weed infestation is noted as a serious problem or when quick establishment is required, a mixture of weeping lovegrass and teff can be used. The following mixtures are suggested:

As previously mentioned, rolling before and after seeding ensures a good seed soil contact which facilitates germination and seedling establishment by approximately 20% - 40% depending on the soil type and condition.

Although weeping lovegrass will grow in a soil with a low pH, it is suggested to improve the soil pH to a level of 6 - 7 through lime application and incorporation before establishment. Additionally, the phosphorus (P) content of the soil should be 15 mg/kg - 20 mg/kg before establishment, while the potassium (K) content should be between 100 mg/kg and 150 mg/kg. It is important to monitor and maintain these fertility levels, especially in the case of hay production, where no recycling of nutrients occurs through dung deposits and/or urination.

Yellow and stunted grass is a sign of nitrogen shortage. An annual application of 60 kg/ha to 210 kg/ha pure N (± 200 kg to 750 kg of limestone ammonium nitrate), depending on rainfall, has been used with good results in the past. With current fertiliser prices, the economics of high fertiliser levels are under scrutiny and a lower optimum application of 150 kg N/ha (± 500 kg of limestone ammonium nitrate) is generally used in multiple applications.

One of the advantages of this grass is its early spring re-growth (before many other planted pastures) that provide grazing during a period of insufficient and available forage. Well fertilised weeping lovegrass grazed in an early and leafy stage can be used for high producing animals, such as steers and dairy cattle. For the best results a quick rotational grazing system is suggested that can maintain 1,5 to 4,0 MLU’s per hectare for the growing season (October to March).

To produce the best quality hay, the operation should be completed in one day. Start cutting early morning (05:00 am) in summer and use a tedder to turn the grass two to three times during the day on a sunny day, and it will be ready to bale by late afternoon. Yields of between 4 tons/ha - 13 tons/ha can be expected as it is directly related to rainfall received and nutrients applied.

Burning weeping lovegrass is a practice not acceptable to many people, because it is said to reduce grass production. This reduction in production however, is not because of fire, but rather the incorrect grazing practices afterwards i.e. too soon and too frequent.

Weeping lovegrass needs a well-planned fertilisation programme to enhance production, quality and palatability. The biggest challenge experienced with hay making, is to cut it at the correct growth stage. Weeping lovegrass is often cut when it seems to be high in production and the species’ inflorescence has developed entirely, but this is normally when it is of lowest quality.

It is recommended that it be cut when the entire sward is approximately at 10% flowering stage. This is often noted when the sward changes from a light green to a darker blue green colour. It is also known that weeping lovegrass does not make good foggage and should rather be used for spring and early summer grazing and hay production later in summer.

As a result of weeping lovegrass’ ability to adapt to various soil and climatic conditions, it is known as a fail-safe pasture with various benefits. Other than the good quality hay and grazing it provides with good management, it is also known that this species facilitates the improvement of soil conditions.

This is particularly evident in sandy soils as it serves as a soil binder, preventing the erosion of sandy topsoil, and the improvement of soil organic matter due to the vigorous and prolific root system this species has. In addition to this species’ inherent characteristic to easily establish and grow on poor quality soils, it also has the ability to utilise nutrients more efficiently. This is advantageous, since it provides good quality pasture at a lower cost, because it uses nutrients very efficiently while also restoring soil structure.

Weeping lovegrass can provide a grazing capacity of 1,5 MLU/ha - 4,0 MLU/ha. Other than the amount of available forage the species provide, the nutrient value will play an essential role in the palatability of the pasture and the amount of pasture intake by the animal. Nitrogen fertiliser can therefore have a positive effect on the digestibility of the pasture and more importantly the crude protein (CP) content. According to work already conducted by Rethman in the 1980’s, it has been shown that the crude protein can reach levels of up to 19% with 240 kg N/ha.

In addition to the nutritional value weeping lovegrass can provide (with good nutrient management), the particular growth stage has an influence on the quality of the material ingested as well. When hay is produced in the pipe stage (that is just before the onset of the reproductive stage when the inflorescence develops), better livestock production can be expected. In terms of average daily gains (ADG), research has shown that anything between 240 g/day - 650 g/day can be achieved on average. In total, as high as 750 kg/ha - 1 000 kg/ha of animal weight gain can occur over an entire growing season.

After establishing a typical ley crop system using weeping lovegrass for a period of around five years, the soil should be sufficiently restored to cultivate annual grain crops under a CA system. Herbicides kill the pasture quickly and the pasture residues remain on the soil surface providing cover that limits erosion and enhances water infiltration as well as reduces their rate of mineralisation.

Depending on the pasture species and situation (e.g. dry or wet area), the pasture could be killed a season before planting grain crops to allow the soil profile to be replenished with water. The water requirement of the first crop planned after pasture, will influence the timing of removal of the pasture. Reliable and timely seasonal rainfall forecasts may assist in this planning. Following the pasture phase, grain crop yield will be restricted unless the soil water profile is replenished. After removing the pasture, weeds in the fallow must be controlled to conserve soil water to maximise the benefit of the ley. A suitable no-till planter should be used to plant the grain crops directly into the residues of the pasture crop, without any other cultivation practice disturbing the soil. Normal integrated fertiliser (based on soil fertility levels and yield targets), weed and pest control practices should be followed.

As a low-input pasture crop, weeping lovegrass can play a significant role in conservation agriculture. If a cropland has been continuously tilled for many years and the health of the soil has degraded, this species can be planted very successfully, restoring the soil and providing good quality hay or grazing at the same time. The dual benefit of soil rehabilitation, together with livestock production returns, proves the long-term value of pasture ley cropping in conservation agriculture.