This article is the 19th in a series of articles highlighting a specific pasture crop species that can play an imperative role in conservation agriculture (CA) based crop-pasture rotations.

Livestock production systems are in many ways dependant on the utilisation of pasture species, in this case as a pasture cover crop, and can therefore become an integral component of CA-based crop-pasture rotations. It is important to identify a pasture species fulfilling the requirements of a dual purpose crop, i.e. for livestock fodder and/or soil restoration.

This article focuses on an annual cover crop with enormous pasture crop potential used to improve soil conditions and to provide a good grazing for ruminants.

Stooling rye is a tufted annual grass species that can grow as tall as 1,5 m. Rye has an extensive, fibrous root system that may go as deep as 1,5 m.

Stooling rye is a valuable fodder (for pasture, hay or silage) and a cover crop during winter. When it is used as a cover crop in double cropping systems, stooling rye during late winter/spring provides valuable forage to animals going into summer.

Of all the cereal crops, stooling rye is the tallest and the hardiest annual species. There are many cultivars of Secale cereale; research has shown however, that diploid cultivars are more drought-hardy than tetraploid cultivars. 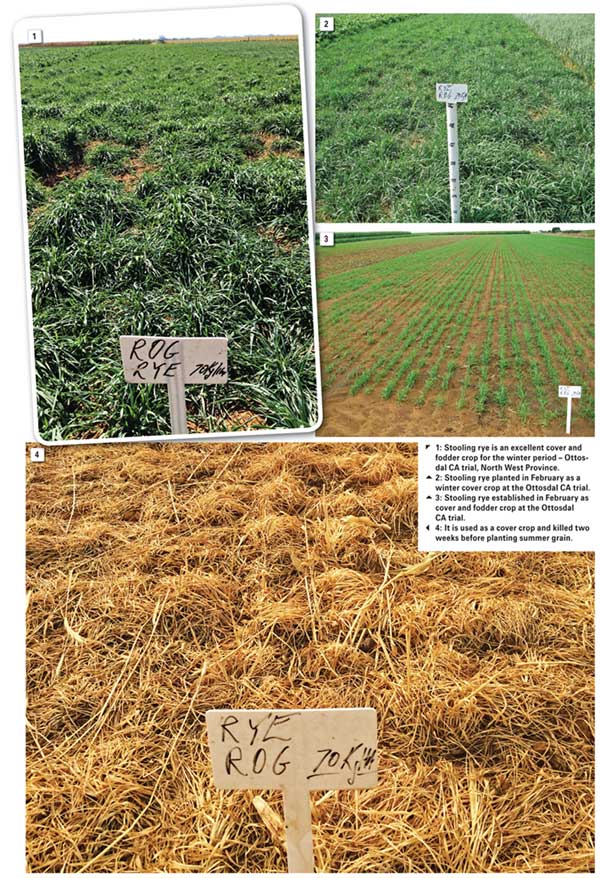 Stooling rye is usually cultivated in areas with cold winters and warm, dry summers, notably in central, eastern and northern Europe, though it is also grown in Africa, Asia and North America. It can grow at very high altitudes and in the tropics it is only found at high elevations (Brink, 2006).

It grows best at temperatures ranging from 15°C to 20°C; however, research has shown that this species can tolerate a wider temperature range (3°C to 31°C). Once well-established, it can withstand very cold conditions (down to -35°C).

Stooling rye grows well under 600 mm to 1 000 mm annual rainfall and is relatively drought-resistant: It can tolerate dry conditions with an annual rainfall as low as 400 mm. Rye prefers well-prepared, fertile, well-drained sandy or loamy soils, with a soil pH ranging from 5,6 to 6,5.

Because it is tolerant of low temperatures, of droughty conditions and of dry and acid soils, stooling rye may be cultivated in places where wheat cannot grow. Rye grows better on light loams and sandy soils than on heavy clay soils.

Stooling rye can be sown with other cereal forages, such as oats, wheat, or even with annual legumes. Seeding rates can be between 25 kg/ha - 50 kg/ha (dryland) and 50 kg/ha - 75 kg/ha (irrigated) and depends upon whether it is sown in a mixture or not.

The best time to seed this species is February/March. Stooling rye forage is also profitable when sown with companion legumes, such as white and red clover or grazing vetch. The forage sustains the legume and the association makes full benefit of residual nitrogen (N) in the soil (UC SAREP, 2006).

It is a valuable winter feed that helps the livestock producer from being less reliant on preserved fodder during winter periods. This species can be grazed late in the autumn and early winter period and then late winter and early spring.

Stooling rye forage can also be used to make silage and haylage. It is recommended to harvest rye no later than at early boot stage (before heading) in order to maintain good palatability, intake and nutritive value.

When the plant reaches boot stage, the species should yield in the order of 7 tons - 10 tons of dry matter (DM)/ha under optimal management conditions. After stooling rye forage is cut, it should be wilted and then made into silage.

Research has shown that hay making of stooling rye is possible, but difficult, since forage moisture is too high at the early boot stage for easy drying.

Stooling rye is a very valuable cover crop and can be used for erosion control. When lands are going to be planted to soybean or maize, the soil can be protected over winter by this species.

It can also be used as a winter cover crop for continuous minimum tillage of maize when the maize crop is harvested early.

It has many positive effects on soil structure and chemical status. Because of its quick growing fibrous root system, rye makes full use of the various soil layers, and in doing so, it improves soil permeability, soil moisture content and soil biodiversity (earthworms); stooling rye forage also prevents leaching of excess soil or manure N (UC SAREP, 2006).

Used as green manure, rye provides large amounts of organic matter to the soil. However, when rye is sown for forage, a part of the organic matter is not returned to the soil. This species is an excellent cover crop to utilise unused soil nitrogen and research has shown how it increases the concentration of exchangeable potassium (K) in the top layer of the soil.

It is also known to suppress weeds very effectively especially through outcompeting weeds for water and nutrients, however, it also suppresses many weeds alleopathically (as a natural herbicide).

Fewer diseases attack rye than other cereals. The following diseases and pests have been reported to cause notable problems in stands of stooling rye.

Stem or stalk smut
Disease control could be achieved by seed treatment and crop rotation where the spores are soil-borne. Resistant varieties are also available.

Anthracnose
This is a common disease especially prevalent in the humid and sub-humid areas of the country. Infected plants often ripen or die prematurely.

Rusts (leaf rust and stem rust)
Destruction of volunteer stooling rye in stubble fields will aid in control of this disease.

Insects
Stooling rye is attacked by many of the same insects that attack other small grains. Serious losses are not common, however early sown autumn rye provides a favourable environment for the deposition of insect eggs which can cause injury to other crops.

During late autumn, livestock can graze stooling rye forage once it has reached a height of 15 cm - 20 cm and it should be removed when the grass height is reduced to 5 cm - 7 cm.

Stooling rye allows very early spring grazing when other perennial grasses are still dormant. It should be grazed rotationally and at high stocking rates in order to prevent it from maturing and losing nutritive value (Samples et al., 2011).

One way for producers to recover these costs is to graze the forage, which benefits producers by integrating crop and animal production. Very limited information exists on the potential forage quantity and quality for grazing livestock of cover crops and mixed species of cover crops.

Research to date has suggested that different plant species complement each other, however research is currently determining how best to balance forage production and how competitive the various species are when added to a mixture with stooling rye.