This article is the 18th in a series of articles highlighting a specific pasture crop species that can play an imperative role
in conservation agriculture (CA) based crop-pasture rotations. Besides improving the physical, chemical, hydrological
and biological properties of the soil, such species, including annual or perennial cover crops, can successfully be used
as animal feed.

Livestock production systems are in many ways dependant on the utilisation of pasture species, in this case as a pasture ley crop, and can therefore become an integral component of CA-based croppasture rotations.

It is imperative to identify a pasture species fulfilling the requirements of a dual purpose crop, i.e. for livestock fodder and/or soil restoration. This article focuses on an annual leguminous pasture crop commonly used to improve soil conditions and to provide a good grazing for ruminants.

Vetches are annual legumes that have either a creeping or ranking growth habit. They are a winter growing species and are thin stemmed and have predominantly purple flowers. Currently the most common vetch types cultivated in South Africa include purple vetch (perswieke or Vicia purpurea/Vicia benghalensis), grazing vetch (weiwieke or Vicia dasycarpa), common vetch (gewone wieke or Vicia sativa) and hairy vetch (harige wieke or Vicia villosa).

These vetch types can be used for silage, hay and grazing. Other vetches that do not belong to the genus Vicia i.e. Litjieswieke (Aesochynomene spp.), milk vetch (melk wieke or Astragalus cicier) and crown vetch (kroon wieke or Coronilla varia) will not be discussed in this article.

Even though these species are commonly used in South Africa, very little production data is available for our environmental conditions and agricultural production systems. 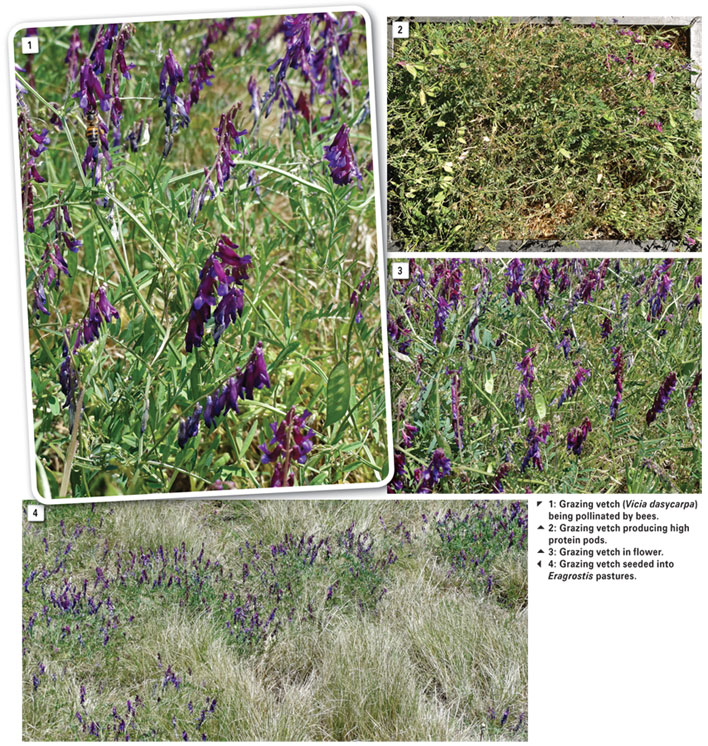 Vetches are commonly grown in dryland wheat production areas. These species are well-adapted to a variety of soil types, but do not particularly tolerate waterlogged conditions. The best time to sow vetch is from December to March. This species is particularly sensitive to acid soils, so it is advised that soil be limed properly prior to planting. Purple vetch is mostly grown in winter rainfall conditions and used specifically for silage or hay and is not suitable for
grazing purposes.

Grazing vetch however, is more tolerant of cold winters than other vetches and more suited for grazing. It develops quickly and is most adapted to poor and acid soils. It also has the potential to reseed itself.

Common vetch is most commonly used for hay and silage too. This vetch produces pods that are commonly grazed by sheep. Hairy vetch is more common for fodder production in both winter and summer rainfall regions.

It is sown in January and will provide good fodder late in winter. Most vetch species require between 350 mm - 550 mm rainfall per annum and if managed well, can provide a good quality animal feed in winter months.

It is often recommended that vetch species are sown (mixed) with winter cereal crops, especially oats, into summer grain crops like maize, as a cover- or intercrop in order to provide fodder at a later stage after grain has been harvested.

This mixture is usually planted in February; it can be grazed in winter and spring and also makes good silage. Seeding rates for vetches in mixtures range from about 20 kg vetch/ha - 30 kg vetch/ha and 25 kg oats/ha.

When grazing or hairy vetch is sown on its own, a sowing density of 35 kg/ha is recommended. Where this species is sown with grain, it is essential to ensure that sufficient fertiliser is provided at establishment; with phosphorus (P) being the most important since it is essential for legume growth. The best time to make hay is when the first pods are well-formed. From a grazing perspective, it is essential to graze the vetch just before the pods will start to mature.

Since vetch species are leguminous, nitrogen (N) is fixed and will help meet the needs of the following crop, protect the soil from erosion and improve soil tilth creating a loose and friable soil structure.

Vetch doesn’t build up long-term soil organic matter due to its tendency to break down completely. It is a succulent crop, with a relatively “low” carbon to nitrogen ratio. Its C:N ratio ranges from 8:1 to 15:1, but increases when used in combination with grasses, such as oats and black oats.

Vetch provides some kind of weed control during its vigorous growth stage and when it is left as a mulch once senesced. Research has shown that hairy vetch mulch can increase main crop disease resistance and prolong the leaf photosynthesis of the following crop.

Grazing vetch is a valuable plant for reduced-chemical or nonchemical management of insect pests. It attracts pollinators and beneficial insects such as lady beetles, lacewings, minute pirate bugs, and others (Smith and Valenzuela; 2002).

Common and purple vetch is therefore recommended as green manure crops. Grazing vetch as a cover crop, covers the soil well. The fine biomass however breaks down rather quickly. It does well in combinations with oats and black oats as a companion crop in mixtures, as well as radish.

Grazing vetch, especially an oats/vetch mix, enhances the stability of soil aggregates (particles) and decreases the likelihood that the aggregates will disintegrate in water.

If grazing vetch is sown into an end of cycle (three to five years) sub-tropical grass pasture ley crop in the autumn months, before being removed by the end of winter prior to the follow-up grain crop, attention should be given to weed control until vetch has established itself.

When planting grazing vetch it is important to keep in mind that this vetch is known to be susceptible to root knot nematode infection, and its growth-limiting (allelopathic) effects on the next crop such as lettuce, young grasses and peas. Grazing vetch can be a host for Sclerotinia minor and should not be used when follow-up crops are sensitive to it.

Usually vetch is killed during an active growing period, but not later than two weeks before the planting of maize, which is done directly into the mulch.

Vetches are very nutritious fodder and research conducted by the Hamilton Veterinary Institute has shown that vetches can have the following nutritional value: Crude protein (16% - 28%), digestibility (50% - 82%) and metabolise energy (7 MJ - 11 MJ), and produce yields of between 4 tons/ha - 5 tons/ha.

Vetch species selected for grazing purposes should not be heavily grazed due to their ranking/creeping growth habit as this will cause damage to the species. When the vetch is mixed with oats, the grazing pressure can be increased. Research has shown that 145 g/sheep/day were achieved on grazing vetch (Spurway et al., 1974).

Vetch species have enormous potential as an annual legume species, especially if they are rotated between two summer growing grain crops. It would however be essential to select the correct species for its purpose especially if the vetch is only to be used for fodder purposes at a later stage, once the combined grain crop has been harvested.

Should a vetch species be selected for grazing purposes, the grazing vetch (Vicia dasycarpa) is most appropriate. Very little production research data is published for South African conditions, making it extremely difficult to rely on international literature and data.