This article is the 16th in a series of articles highlighting a specific pasture crop species that can play an imperative role in conservation agriculture (CA) based crop-pasture rotations. Besides improving the physical, chemical, hydrological and biological properties of the soil, such species, including annual or perennial cover crops, can successfully
be used as animal feed.

It is imperative to identify a pasture species fulfilling the requirements of a dual purpose crop, i.e. for livestock fodder and/or soil restoration. This article focuses on a perennial pasture commonly used to improve soil conditions and to provide a good grazing for cattle and especially sheep.

Genetically, there are two types or two ploidy levels found in this species that are cultivated: Diploids and tetraploids. This species is originally from South America and is well-adapted to coastal areas and plains. It establishes well in sandy soils with low water retention and low fertility, and tolerates drought, sporadic flooding, and continuous grazing. 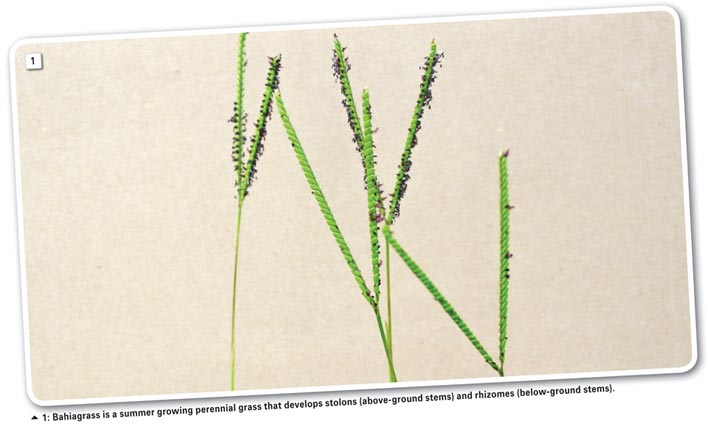 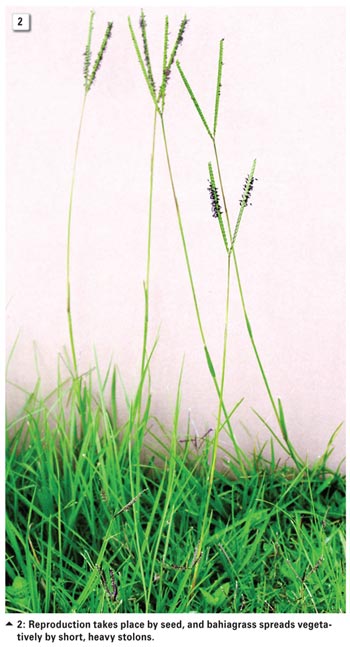 Bahiagrass is best adapted to sandy loams and tolerates low fertility and low pH. It grows well on soils with acidic pH from 4,5 to 6,5 and the optimal soil pH is 5,5. At a pH greater than 6,5 the grass shows chlorosis and stunted growth.

It survives well on soils that are susceptible to drought, where it presents a more open stand to compensate for the low moisture available. Bahiagrass grows vigorously under high temperatures and when day lengths are long, and herbage production is greatest from October to April.

More than 85% of the production occurs during the six warmest months (October through to March). The most popular cultivars are Pensacola, Tifton 9, TifQuik, and UF-Riata. These cultivars are diploid, where Paraguay, Argentine, and "common” are tetraploids.

Bahiagrass is established by planting seed. An area where bahiagrass is most likely to grow is on soils with good soil moisture and which are well-drained. It is best to establish this species in November. However, if irrigation is available, bahiagrass can be planted as early as September.

It is essential to control weeds first before planting, since seedlings grow slowly, but once seedlings have emerged, apply fertiliser following soil analysis recommendations. When seeding bahiagrass, never seed too deep, and use sufficient seed.

Broadcast seeding rates can vary between 20 kg/ha - 25 kg/ha. Use the correct seeding rate as this will result in the stand closing quicker, and the opportunity for weeds to fill in the open spaces will be minimised. After seeding, consolidate the soil with a roller to seal the moisture in the soil.

Light fertilisation of bahiagrass will generally be necessary within seven to ten days after seedling emergence. The initial application should consist of 65 kg nitrogen (N)/ha, all of the recommended phosphorus (P), and 50% of the recommended potassium (K).

Approximately 40 to 50 days after the initial application, an additional 100 kg of N and the remaining K should be applied. If manure or bio solids are used as the main source of nutrients, apply the entire annual application at one time after the plants are large enough to withstand physical damage from the application. Well-fertilised plants will form a dense stand in 60 to 90 days, at which time a light grazing or mowing can be done.

The weed control in bahiagrass at seedling stage needs to be done mechanically by mowing. From emergence to approximately 15 cm in height (seedling stage), bahiagrass does not tolerate most herbicides. Bahiagrass seedlings are susceptible to phenoxy-type herbicides (2,4-D, Dicamba and others), and they should not be applied until seedlings are at least 15 cm tall.

Bahiagrass is a highly persistent grass as a result of many tillers and rhizomes and especially its root density. Because of its rhizomes, bahiagrass is able to withstand close defoliation. The stubble height in midsummer season should be approximately 5 cm for hay production, 7,5 cm if grazed rotationally and 12,5 cm if under a continuous grazing system.

There is plenty of evidence that shows that when pastures are over-grazed and close grazing continues, the bahiagrass will become weak and the stand of pasture will deteriorate. It is however well-known that fast growth of bahiagrass is associated with a fast decline in nutritive value.

By increasing the number of animals during the rapid growth of bahiagrass, excess old growth will be avoided. Also, the improvement of forage crude protein and digestibility, as well as the better performance of livestock will likely occur. If well-fertilised bahiagrass can be cut prior to the formation of the inflorescence, it will provide good quality hay.

The quality of the grass drops dramatically once the inflorescence is present. Tifton 9, TifQuik, and UF-Riata have a more upright growth and are recommended for producers who want to grow bahiagrass for hay production. These varieties produce long leaves and a lot of biomass.

Intensively managing bahiagrass for hay production is an option for remediating P-impacted soils due to the increased yields that can be achieved with N fertilisation. Studies have shown that yield increases by about 70% with N applications at a rate of 50 kg/ha/harvest. Research reports also show that the application of N fertiliser increases bahiagrass P uptake and consequently decreases P losses to groundwater.

Cumulative P removals by bahiagrass under hay production management for a two-year period have been reported. If plant tissue phosphorus is at a high of 0,35% and eight tons of dry matter is produced, approximately 50 kg of phosphorus/ha/year would be removed.

Many reports have shown that mole crickets can cause serious damage to bahiagrass pastures. Bahiagrass is also susceptible to “dollar spot“ (Sclerotinia homoeocarpa) and “ergot“ (Claviceps paspali) diseases in hot, damp weather conditions. These diseases will affect seed and production yield, but in general, none of these diseases are toxic or a problem to livestock.

The energy concentration of bahiagrass – which is reflected in the digestibility of the herbage – declines considerably as the season progresses, irrespective of how fertile the soil is or the way it is defoliated. Various studies show that well-fertilised bahiagrass remains at 10% to 12% crude protein (CP).

As a result, bahiagrass is not well-suited to support the demands of livestock with high nutritional requirements, such as growing animals or lactating dairy cows. Concentrations for phosphorus (P) in leaf tissue may range from 0,10% to 0,45%, and for potassium (K), it may range from 1,1% to 2,5%. The addition of fertiliser will be necessary to maintain adequate dry matter production, if the leaf concentrations of phosphorus drop below 0,10%, or 1,1% for potassium.

However, these numbers generally decline from summer to autumn. The ADG in summer will often range from 550 g/day to 600 g/day in January/February. When pastures are under-stocked in the summer, daily gains are usually low, associated with over-mature growth.

Bahiagrass is a species well-known for its adaptation to very wet and acidic soils and has the secondary purpose of mopping up some of the excess P should this be the case. This is especially applicable where soils have received numerous amounts of animal manure over the years.

If a species is to be recommended to be planted on grain crop soils that are grown under irrigation in areas that are relatively cool, this species will have the ability to improve these intensively managed soil conditions if used as a pasture ley crop.