This article is the 15th in a series of articles highlighting a specific pasture crop species that can play an imperative role in conservation agriculture (CA) based crop-pasture rotations. Besides improving the physical, chemical, hydrological and biological properties of the soil, such species, including annual or perennial cover crops, can successfully be used as animal feed.

Livestock production systems are in many ways dependant on the utilisation of pasture species, in this case as a pasture ley crop and can therefore become an integral component of CA-based crop-pasture rotations.

It is imperative to identify a pasture species fulfilling the requirements of a dual purpose crop, i.e. for livestock fodder and/or soil restoration. This article focuses on a root forage crop commonly used in the winter season as a crop to improve soil conditions and to provide cover in the winter months of a summer rainfall region.

This annual crop could possibly succeed a perennial grass pasture prior to planting the next season of grain crops.

Radish (also commonly known as Japanese, forage or tillage radish) is an annual plant that originates in East Asia and Europe. This forage crop is well-known in the cooler summer rainfall regions of South Africa.

The root component of the crop comprises approximately 50% of the total production, with moisture content as high as 90%. Both the leaf and root material of this crop can be used as young fresh material in winter or carried over to late winter or early spring for fodder.

The most common cultivar is Nooitgedacht, with alternative cultivars such as Samurai, Sakurajuma, Star 1650 and 1651 and a soft leaf cultivar by the name of Sterling.

This species is both cold- and drought-resistant, but not tolerant of waterlogged conditions. Radishes grow best when planted early enough to allow six weeks of growth before regular frosts. Radishes are winter hardy plants and are tolerant of light frosts, but generally show injury when temperatures drop below the -0°C.

A suitable rainfall for radish production requires a minimum of 650 mm per annum and it proliferates with a good autumn rain.

If this crop is planted too early, this species tends to flower prematurely, not allowing sufficient root formation to occur. Late plantings could potentially result in insufficient soil moisture reserves.

When this crop is planted in rows, it is recommended that rows are planted 90 cm apart with plant interspacing of 35 cm - 50 cm from each other. However, when planted as a cover crop, denser seeding rates are used (usually broadcasted) and narrower rows of maximum 50 cm apart are preferred. The seeding rate of 2 kg/ha in rows is advised and 4 kg/ha when sown in a broadcast fashion.

Radish reacts well to a good fertilisation of phosphate (P) and potassium (K) before establishment. Fertilisation should initially strive to obtain at least 20 mg/kg of P and 140 mg/kg of K. 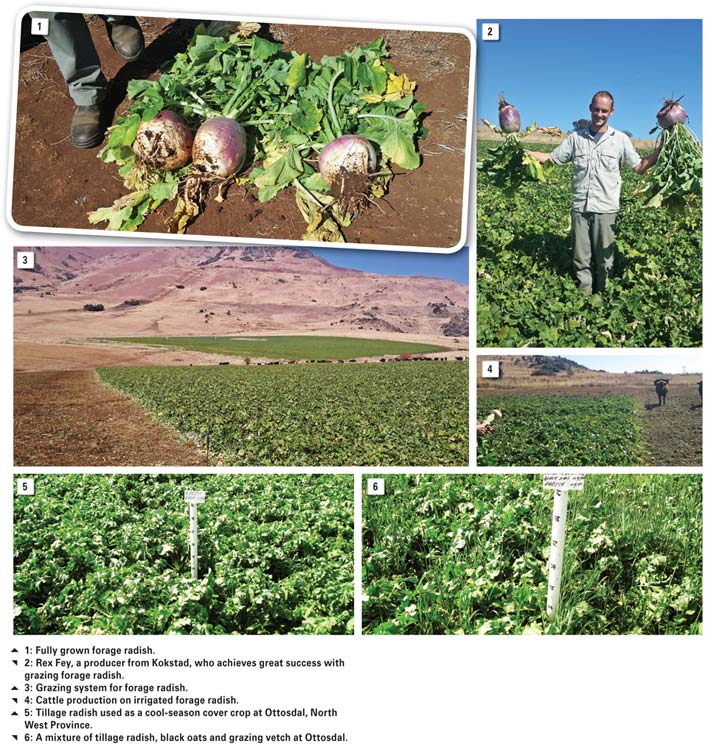 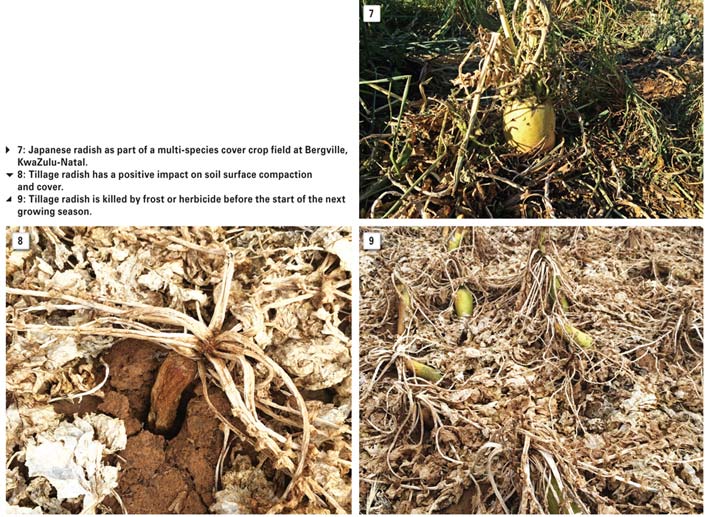 It is known that when forage radish is grown as a cover crop, it can contribute significantly to:

In a few research trials it was found that forage radish plots had fewer weeds and almost no remaining cover crop residue, which resulted in warmer, drier soils.

According to Gruver et al. (2014) this crop has been researched extensively to highlight the benefits of radish cover crops on:

Radishes have little tolerance of wet soils; therefore waterlogged conditions need to be avoided. Radishes are very responsive to N, and N-deficiency limits their ability to compete with weeds, grow through compacted soil, and perform other potential functions.

Nitrogen deficiencies have been observed when planting after silage or grain corn on sandy soils or on soils that do not have a history of manure application. N deficiencies are also likely when excessively high populations are established. Radishes are only moderately cold-hardy and need about six weeks of favourable growing conditions to produce sufficient biomass to achieve most potential benefits (Gruver et al., 2014)

Radish is a good crop for rotational cropping systems, especially after a few years of pasture just prior to planting a grain crop. This crop has very valuable benefits for the dairy production industry.

Often radish is grazed with the help of an electric fence, however, to optimally use most of the plant material, it can be removed from the soil and fed to cattle. Production values of up to 6 tons/ha can be expected with a protein value of 18% - 21% for roots and 20% - 30% for leaves. (Dannhauser, C. and Van Zyl, E. – personal communication).

Choosing radish as a cover crop should be closely linked to problems that producers who are practising conservation agriculture, encounter. One such a problem, especially in our semi-arid cropping areas, is compaction layers within the soil profile, especially within the top 40 cm.

The unique taproot of radish and the ability to elevate this compaction to depth can have an impact on farmer’s decision to use radish as a cover crop. Not only deep compaction layers are elevated, but tubers push the soil up at the surface making it soft and positively influence infiltration.

Due to the fact that residues of radish have a narrow C:N ratio, it is best used in mixtures with crops such as grazing vetch and black oats. This will ensure a proper ground cover before a cash crop is planted. Using radish and radish mixtures during the cool winter months usually deplete soil water that could influence or delay initial planting dates of a following summer cash crop due to a dry soil profile.