Conservation agriculture tour to the USA – a reflection and key messages

From 23 to 29 June this year, the 6th World Congress on Conservation Agriculture (WCCA) took place in Winnipeg, Canada and gave nearly 400 participants from 51 countries, including a South African delegation of nine (six officials and three producers), the opportunity to learn from and network with an international gathering of agricultural experts on conservation agriculture (CA).

According to the WCCA, agricultural production systems are not sustainable unless they are profitable, and CA holds the key to building and maintaining healthy soils and profitable farming systems.

After the conference, a three and a half day Dakota no-till tour took delegates through the heart of no-till farming areas of the north Midwestern USA. Delegates heard from producers who have been practicing no-till crop production for over two decades.

According to the United States Department of Agriculture (USDA), managing to obtain soil health can be accomplished by: 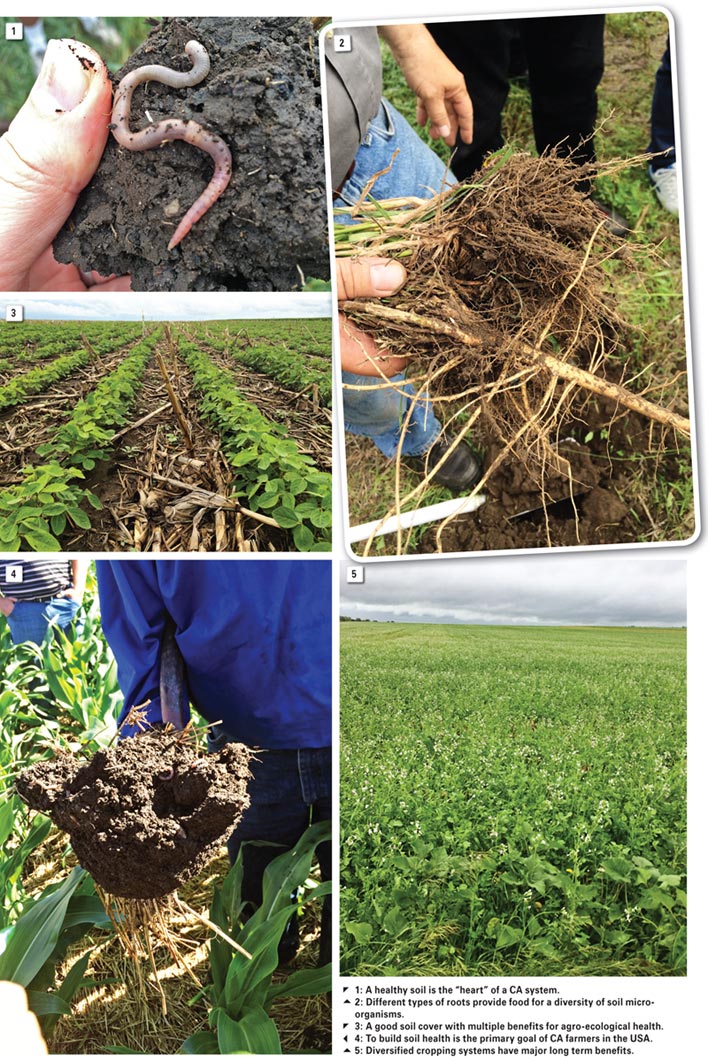 Tilling the soil is the equivalent of an earthquake, hurricane, tornado and forest fire occurring simultaneously to the world of soil organisms. Simply stated, tillage is bad for the soil.

Physical soil disturbance is destructive and disruptive to soil microbes and creates a hostile, instead of hospitable, place for them to live and work.

The soil may also be disturbed chemically or biologically through the misuse of inputs, such as fertilisers and pesticides. This disrupts the symbiotic relationship between fungi, micro organisms and crop roots. By reducing nutrient inputs, we can take advantage of the nutrient cycles in the soil to supply crop nutrients and allow plants to make essential associations with soil organisms.

Sugars made by plants are released from their roots into the soil and traded to soil microbes for nutrients to support plant growth. The key to improving soil health is assuring that the food and energy chains and webs include as many different plants or animals as practically possible.

Biodiversity is ultimately the key to the success of any agricultural system. Lack of biodiversity severely limits the potential of any cropping system, resulting in the increase of disease and pest problems. A diverse and fully functioning soil food web provides nutrients, energy and water cycling that allows a soil to express its full potential.

Grow living roots throughout the year

There are many sources of food in the soil that feed the soil food web, but there is no better food than the sugars exuded by living roots.

Soil organisms feed on sugar from living plant roots first. Next, they feed on dead plant roots, followed by above-ground crop residues. Lastly, they feed on the humic organic matter in the soil. Healthy soil is dependent upon how well the soil food web is fed. Providing plenty of easily accessible food to soil microbes helps them cycle nutrients that plants need to grow.

Keep the soil covered as much as possible

Soil should always be covered by growing plants and/or their residues, and soil should rarely be visible from above.

Soil cover protects soil aggregates from “taking a beating” from the force of falling raindrops. A mulch of crop residues on the soil surface suppresses weeds early in the growing season giving the intended crop an advantage. They also keep the soil cool and moist which provides a favourable habitat for many organisms that begin residue decomposition by shredding residues into smaller pieces.

Observations during the CA tour to the USA

General observations
Producers visited in North (ND) and South Dakota (SD) have a long-term view or vision to:

“Stacked enterprises” – integrating various enterprises, e.g. crop- livestock system – has proven to be very conducive to the sustainability of these producers. “Rather diversify, since we produce too much grain in the world,” says Brown.

A key message from Brown and other producers, was to “work with Mother Nature and the rules of ecology, since ‘everything is connected’, let nature do it.

“If you have a problem, ask yourself what you have done wrong which nature is trying to correct.” Most of them agree that in 100 years, we will have to be 0% fossil fuel driven.

Soil health and fertility
The clear message is that “we must treat soils as we are supposed to treat all other living things on earth – with respect”. Soil is the heart of the CA system, and if we “take care of the land, the land will take care of us”. Healthy soils will lead to all sorts of other benefits, ultimately resulting in long-term productivity and profitability. According to the USDA, managing for soil health (improved soil function) is mostly a matter of maintaining a suitable habitat for the myriad of creatures that comprise the soil food web.

Producers should know if their nutrients are cycled or “leaking”.

Ecosystems that leak nutrients (including carbon) for extended periods of time are degraded. We should move away from the idea that the soil acts more or less like a static recipient of nutrients or a “bank from where producers’ money is constantly leaking out of”. Adding chemical mixtures to soils without organic matter is inefficient.

Diversified cropping systems are necessary to increase resilience and accelerate the build up of soil organic matter (SOM). It is the main driver of sustainability due to nutrient cycling and improved soil- and agro ecological health.

Almost all of the agronomic problems producers face (weeds, diseases, insects, fertility, etc.) can be traced to problems with ecosystem processes. In this respect, we must recognise the destructive impact of tillage on soil and water (both on and off site), as well as the lack of diversity.

Rotations that are not consistent in terms of either interval or sequence provide the best protection against species shifts and biotype resistance. An example is “stacked rotations”, one of the less well-known approaches of crop rotation, which have crop type to crop type intervals of a minimum of two years somewhere in the rotation. This includes rotations where crops, or crops within the same crop type, are grown in succession (normally twice) followed by a long break, which is the way that plants sequence in nature.

Perennial sequences are an excellent way to jump start the system. However, the desire to increase diversity and intensity needs to be balanced with profitability. In general, the crop yield figures observed among the CA producers in the USA doubled with the same fertiliser levels, or stayed the same with much less fertilisers (primarily due to improved soil health). 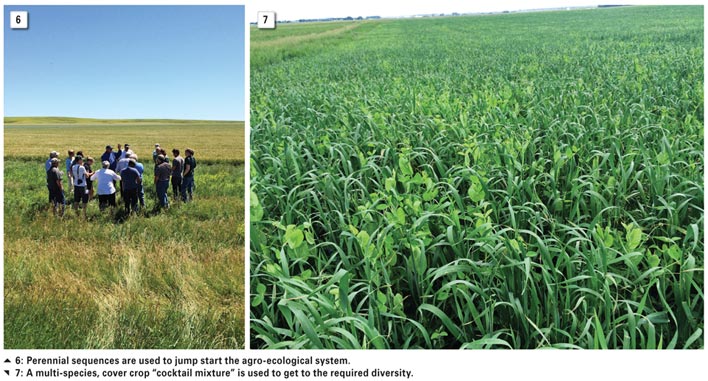 Most CA producers and other practitioners in the USA agree that the introduction of cover crops into cropping systems require a major change in philosophy and practice. Their advice is to treat it as a cash crop; it does pay. Cover crops have multiple roles and functions and each producer needs to find that unique application for it almost every season. For example, one function is to “catch” residual nutrients and water (catch crops) and “release” it again for the next crop.

A common practice is to use cover crop “cocktail mixtures” of six to twelve crops to get to the required diversity; in other words they aim to mimic or even enhance nature and its diversity (i.e. the prairies). The major benefit is that diversity speeds up biological time.

To minimise soil disturbance, producers in the USA are moving from single and double discs to “scissor discs”. They are totally moving away from the disturbance of tine planters which cause a proliferation of weeds (on the plant row), the loss of soil water and the disruption of soil structure (with loss of SOM).

The best weed control strategy is a good crop canopy, soil cover and minimal soil disturbance, which results in 97% weed control. In some cases producers are using glyphosate once every five years.

The use of integrated crop-livestock systems is quite common, since it improves nutrient cycling and soil health (if done properly). A key component is multi-species pastures or cover crops – up to 20 species in rotation with cash crops. 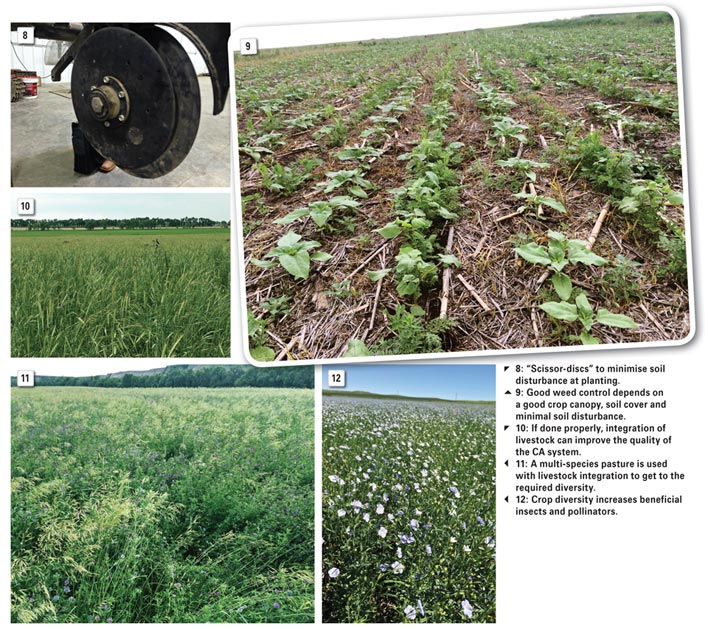 The 6th WCCA and the post-conference tour to the USA confirmed that CA is a truly sustainable agricultural intensification system for grain producers across the globe, which is environmentally sound and socio-economically viable.

At the conference, public and civil societies across the world were encouraged to promote CA through all possible avenues and opportunities, due to its huge environmental, social and economic benefits.

The major emphasis to improve the technical performance of the CA systems was on increased diversity through crops (e.g. through proper crop rotations and multi-species cover crops) and integration of livestock (e.g. through ley cropping and cover crops).

The promotion of Innovation Systems to reach and empower producers through CA, such as on-farm, producer-led research, has confirmed the strength of the approach taken by Grain SA, supported by the Maize Trust and the Winter Cereal Trust.