This article is the twelfth in a series of articles highlighting a specific pasture crop species that can play an imperative role in conservation agriculture (CA)-based crop-pasture rotations. Besides improving the physical, chemical, hydrological and biological properties of the soil, such species, including annual or perennial cover crops, can successfully be used as animal feed.

Livestock production systems are in many ways dependant on the utilisation of pasture species, in this case as a pasture ley crop, and can therefore become an integral component of CA-based crop-pasture rotations. It is imperative however to identify a pasture species fulfilling the requirements of a dual purpose crop, i.e. for livestock fodder and/or soil restoration.

This article focuses on an annual pasture crop commonly used in a short one winter season rotation as a cover and green manuring crop either succeeding a summer annual or perennial species. Green manure cropping is a practice not well understood or economically justified in South Africa, as it seems expensive, because of the seedbed preparation, establishment and potential waste or rather the unknown value of incorporation.

With the rising cost of fertilisers and the objective of sustained soil fertility and soil health improvement, these options can provide opportunities.

Common oats is a cool-season, annual cereal crop, and is becoming a very well-known quick cover crop that has the ability to meet numerous soil conservation priorities. Its tropical relative, the “black oats” variety, has also received support from many who have used it in certain no-till systems and other agricultural systems in other parts of the world.

Common oats is an upright, annual grass that can reach a height of 1,5 m. It has a fibrous root system and its growing cycle can be anything between 60 to 75 days depending on the cultivar and the environment in which it is grown. Its seed is inexpensive and there are many adapted varieties. 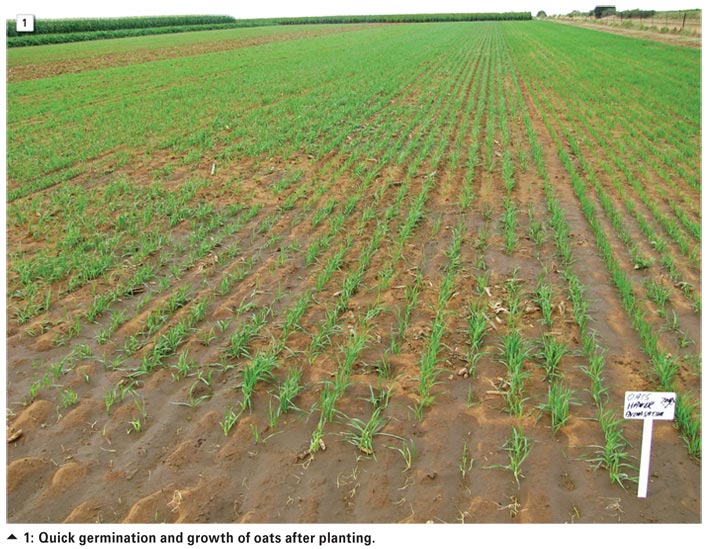 This crop has the ability to grow much better in wet soils than other cereal crops, however, it only requires approximately 350 mm of moisture for growth and is therefore regarded as a good crop for moisture conservation. There are numerous cultivars available from various seed merchants.

Broadcast or drill seed to a depth of 1 cm - 2,5 cm and disk lightly. Seeding rates of up to 100 kg/ha can be used in winter rainfall areas or under irrigation. In summer rainfall areas under dryland production, 50 kg/ha - 75 kg/ha of seed can be planted.

If the soil is sufficiently moist, shallow seeding promotes rapid seedling emergence with reduced incidence of root rot disease. Often this species is not fertilised with nitrogen (N), as it is used to soak up excess nitrogen in the profile and prevent it from being lost through leaching.

If N is to be applied, it will be to promote microbial activity and will also prevent the decomposing plant material from tying up nitrogen needed by the following crop. This way it can be reincorporated prior to establishing the succeeding crop. If the oats is to be used for cattle production, it can either be grazed with sufficient periods of rest for regrowth, or hay and/or silage can be made.

Common oats has proven to be an effective method to control weeds, thereby reducing the need for chemical weed control. Oats has the characteristics of germinating very quickly and to beat the weed species growing in the same area.

In addition to this, oats releases an allelopathic compound (plant-made chemicals) that hinders the germination and growth of weeds for several weeks. These compounds can however also hinder the growth of subsequent crops, such as wheat, peas, lettuce and rice and therefore this trait should be kept in mind when planning the timing and sequence of a crop-rotation programme for a farm. These allelopathic compounds tend to break down in about three weeks; nevertheless, consult a specialist for more detail regarding specific crops.

Literature has shown that common oats produces about 5 tons/ha of dry matter and takes up about 7,25 kg of N in each ton of dry matter. The tissue N content of oats is about 1,2%. As previously stated, the addition of N fertiliser will promote microbial activity and will also prevent the decomposing plant material from tying up nitrogen needed by the following crop.

Alternatively, a mixed cover crop stand of oats and a legume can minimise potential problems of N immobilisation after cover crop is incorporated. To allow time for residue decomposition, allow two to three weeks after cover crop incorporation before planting the succeeding crop.

Incorporating oats into the soil also improves the soil “health” by improving the soil structure which improves water infiltration. Most of this soil improvement will occur in the top soil layer. As the residues decompose, the organic matter additions provide food for the growing microbial population.

When planted at low seeding rates, oats can also be used as a nurse crop for establishing slower growing legume cover crops. If the oats grows too vigorously, it can be cut to allow better growth of the legume intercrop. 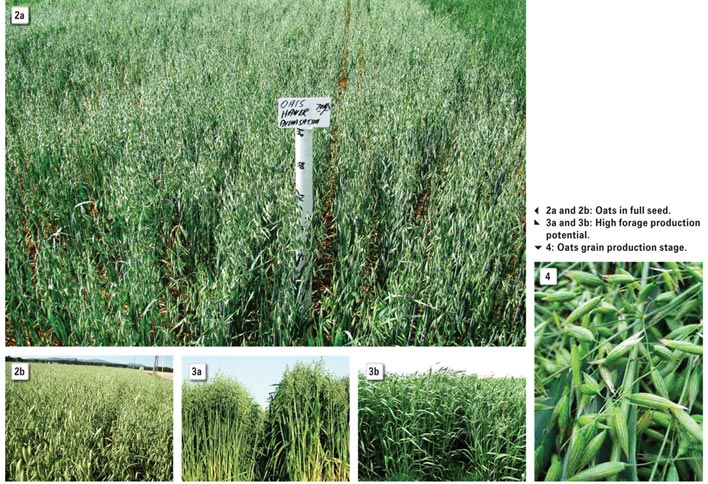 When oats is grown for grain or forage, it can have more insect problems (such as wireworms, cutworms, armyworms, aphids and mites, thrips, leafhoppers and grubs). Cultivars resistant to rust and blight have been developed.

Other than the soil improvement benefits of oats, this small grain crop is also commonly used as forage for animal production systems. Oats is relatively competitive with most annual winter forage crops and can be grazed when 20 cm tall.

Grazing should be managed to remove the forage before becoming too stemmy. Oat hay makes a satisfactory hay crop if cut when the stems and leaves are still green. Oats make the most nutritious hay when cut in the soft dough stage because of the higher protein content.

Oats used for forage has a greater tendency than wheat or barley to accumulate potentially toxic levels of nitrate in plant forage under conditions of drought, hail damage, or other growth factors that cause cessation of normal growth patterns. Under such conditions, a laboratory diagnosis of oats forage for nitrates would give helpful information relative to its safety.

Oats can be regarded a good “growing” feed for cattle but of having a lesser value than maize, grain sorghum or wheat when used as the major energy source in finishing rations. Rations containing very high levels of oats or even rations with no roughage do not produce comparable weight gains to those of maize and sorghum.

Oats may have a place in all-concentrate diets as a supplement for cereals which have low fibre contents. It is however still a concentrate feed. Death can occur from acidosis due to overconsumption of oat grain by young animals. As with all other concentrates, sudden excess consumption must be avoided.

There is no doubt that oats is an excellent crop to tolerate low fertility soils, for suppressing weeds due to its rapid growth rate and establishment as a “catch crop” for taking up and storing excess N.

With its vigorous root system it also provides for good erosion control by increasing soil organic matter content to improve soil structure. Other than all the soil improvement benefits it has, it can be used for animal grazing systems and for providing lasting residues for succeeding crops.