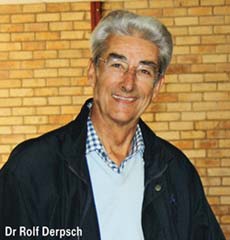 On the 14th the event was held in Pretoria for the Limpopo, Mpumalanga and Gauteng provinces and on the 15th at NAMPO Park in Bothaville for the Free State and North West Provinces.

These events were attended by 60 (Pretoria) and 100 people (Bothaville) respectively and were characterised by lively discussions among the participants, after presentations by Dr Derpsch and some of the producers. These producers include: Willem van der Walt, Ralf Küsel, Tony da Costa, André de Villiers, Hannes Otto, Pietman Botha (advisor), Cobus van Coller and Wynn Dedwith.

Dr Derpsch has extensive experience on CA from almost all parts of the world, but was instrumental in the development of CA in Paraguay and Brazil from the early 1970s, which has led to its wide-scale adoption in those countries.

On the 14th and 15th, he first shared some key and practical ideas from his experiences in the successful introduction of CA with producers across the world, which was then followed by a question and answer session and discussions until the end of the day.

The information and lessons learned during these events are seen as critical to improve practices of existing CA producers, but also to spark the interest and knowledge of producers interested to start CA. In more detail the dialogue with Dr Derpsch during the first event is elaborated below.

Q: What do you have to monitor in CA? What are you looking for in CA?

A: The more important question is “when” to look. Timelines (activity schedule) is very important: Actions should take place exactly when they need to take place; doing things at the right time is the key to success in any agricultural system. It is important to monitor soil fertility and the build-up of soil cover and soil organic matter.

Monitor weeds, for better control. Some diseases or pests may decrease, others may increase, but at the end there will be a balance. The situation changes in CA, since natural enemies of pests are not (always) killed. The idea is to observe nature and identify different species, enhancing biological control.

Q: What about the integration of animals in a CA system?

A: It is very positive, especially in cases where rotation happens. However, in some cases, crop residues are removed in excess. When you have excess residues, you may remove some.

Q: What about tines in a no-till planter (compared to discs), since South African topsoil is difficult and has an “inherent motor” to compact? Is the best not to use a tine during the transition phase?

A: Frank Dykstra (in Brazil) is farming in very sandy soils and has beenpracticing CA for 40 years without a need to rip the soils.

It is important to have proper crop rotations and cover crops in place. You need to have residue covering the soil, otherwise raindrops will “dynamite” the soil. I agree on the consideration of tine-planters during the transition years. (Some producers in the audience mention that they have been using discs from the start.) 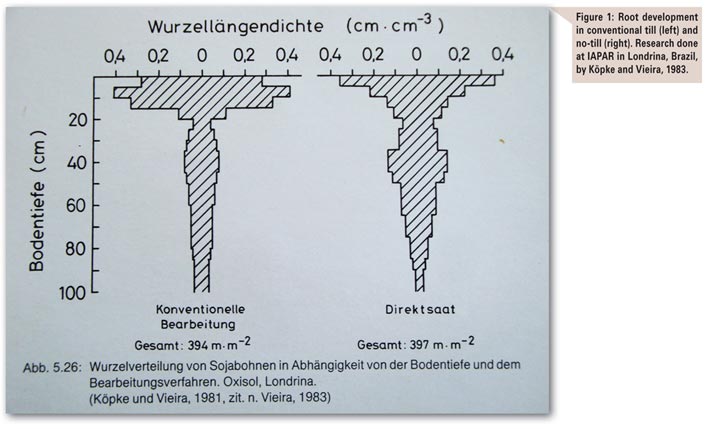 Q: Should we use controlled traffic or change the planting direction every year (e.g. 30°)?

A: Both are acceptable and any traffic control system is good, where it is possible to introduce it. If it is difficult to do controlled traffic, the most important is to reduce the traffic in the crop fields and to use cover crops and rotations. Use low pressure tyres (0,6 bars); do not use too heavy equipment. I prefer a number of smaller tractors compared to one big tractor.

Q: What about contour banks in CA fields?

A: In Brazil contours were subsidised and afterwards some CA producers decided to remove them. It is wrong to remove them; if you remove, do not remove all of them, maybe some. Some situations might occur where you have too little cover and contours will be needed. Keep around 50% contours and consider using broad-based contours on which you can plant or drive over. The planter should be flexible enough to work under uneven soil conditions.

Q: What is the most efficient way to improve soil organic matter (SOM)?

A: Produce as much biomass as possible for your location. Fertilise crops well and use the right varieties. Try to use cover crops – cover crops have been developed for any situation, e.g. as catch crop, intercrop, fodder crops, green manure, etc. Consider African grasses to improve underground biomass (i.e. root mass).

Q: What about soil pH and liming in CA?

A: Soil acidity should be assessed and corrected (i.e. lime incorporated into the soil) before starting with CA. Afterwards, apply lime on the soil surface. Organic acids of some plants, especially cover crops (and also root exudates) move lime into the soil profile; it is not necessary to incorporate the lime. Apply 1 ton/ha/year to increase pH slowly and not 3 ton/ha every three years. Phosphorous (P) concentrates on the soil surface, but roots in the CA system will reach P in the surface soil layer.

Q: What about cattle on CA fields – are there long-term trials showing yield/economic differences?

A: Trials have been done in Brazil. In the beginning they have noticed soil compaction, but after producing enough soil cover, it was sustainable. Cattle’s hoofs must not tread on soil too much; reduce periods of cattle grazing on the fields to the minimum (i.e. a few weeks per year). Remember, soil cover is the most important thing in CA. 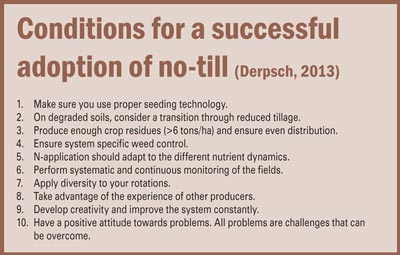 Q: What kind/type of cover crops can be used?

A: There are many types and options for different situations or problems. Researchers and/or producers need to identify problems and possible cover crops with the potential to alleviate these problems. Some screening trials will probably be needed at the beginning to identify the most suitable cover crops; thereafter they should be integrated into the cropping systems.

An example is the sowing of temperate crops (e.g. oats, vetch and radish) into maize or soya fields just before harvest, to use residual soil water and nutrients as a “catch crop” through the winter – could also serve as standing fodder and to alleviate soil compaction. In this example, winter cover crops soak up excess soil water and nutrients and supply food to all the microbes in the soil during the winter months rather than microbes having to use up SOM reserves for nutrients.

Q: What is your opinion on row-width and plant population?

A: More soil water will allow more plants. A slight increase will be possible, but it depends what you want to achieve. Higher plant population and better space distribution will give better growth of plants.

Q: What about Sclerotinia: Does CA influence it positively or negatively and how should it be managed?

A: A monoculture soybean practice is a problem. You must investigate or consider “stacked rotations”, e.g. two year-two year-two year per crop to eliminate very persistent diseases. Increasing the carbon content of the soil will enhance biological control.

A: It is not as harmless as it was thought to be. A recent study in Germany showed that you need at least two weeks between application and seeding (of non-Roundup Ready crops). Producers should not rely too much on one herbicide. Crop rotation forces you to also rotate herbicides, which you need to aim for.

Q: What is a typical root distribution pattern under CA?

A: Research in Brazil investigated root systems between conventional and CA systems. The results showed that roots in CA systems are more even and deeper, as compared to conventional till where roots concentrate on the upper 20 cm (see photos). Researchers and producers should look for deep-rooted crops and cover crops to produce a lot of vertical channels in the soil.

Q: Why do we apply more nitrogen (N) under CA during first few years?

A: There is a lack of N due to immobilisation in CA; tillage increases mineralisation and quick availability of N. A good practice is to apply an additional 30 kg/ha of N during the first five years, then the normal recommended levels after five years. After 20 years of continuous CA and returning enough biomass to the soil, N rates can generally be reduced.

Q: Should we plant with fertilisers or broadcast in CA systems?

A: After soil has reached equilibrium (balanced nutrient status), broadcasting is possible. Another possibility is to fertilise those crops that highly respond to fertilisation (e.g. maize) with a double rate in the row and not fertilising for instance soybeans that do not respond so much on direct fertilisation, but take advantage of residual fertilisers in the soil.

The next edition of the CA dialogues with Dr Derpsch will cover the second event held in Bothaville.