Following an introduction to some theoretical principles and practices of conservation agriculture (CA) and integrated soil fertility management in Part 1 (page 20), this article presents a case study of a one-season soil rehabilitation process of degraded soil on the farm Humanskraal of Mr George Steyn in the Ottosdal area.

The soil was degraded due to continuous tillage and excess water run-off, leading to severe sheet, rill and gully erosion. The soil type is an Oakleaf soil form, a fairly common soil for crop production in the region with a depth of about 500 mm to 600 mm and underlain by weathered rock material. To prepare the soil for crop production, the gullies were closed with a disk during winter.

The Grain SA CA research project team, which included Steyn, decided to initiate a biological soil rehabilitation process on these degraded fields through the establishment of a ten species cover crop mix, planted with an Amazon spreader (for the small seeds) and a John Deere no-till planter (for the big seeds).

As described in Part 1, the use of crop diversity, in this case a summer cover crop mixture, enhances and speeds up the biological (ecosystem) processes in the soil. No fertilisers were used because the previous crop was not harvested due to a poor stand and performance.

The summer annual cover crop mixture included functional groups such as legumes, cash crops, grasses, as well as a brassica in the form of radish. The winter mixture included the same functional groups. The summer mix had mainly annual grasses that are not easily decomposed (such as babala and fodder sorghum), while the winter cover crop mix had temperate crops that decomposed fairly quickly.

The impact of the different cover crop mixtures on maize grain yield will be determined after harvest this year.

The dry matter determined from the summer cover crop mix during the growing season was between 11 t/ha and 14 t/ha with an average of 12 t/ha. This gives us a good indication of the potential amount of nutrients locked-up in an organic form within the biomass. This plant biomass contains on average 1,4% N, 0,3% P and 2% K considering previous sample analyses.

This amounts to an estimated total amount of nutrients of 168 kg nitrogen (N), 24 kg of phosphorus (P) and 249 kg of potassium (K), of which around 40% of N could potentially be made available for the next crop through decomposition by microbes.

The cover crop was left to be killed by frost; a decision was made not to roll it flat in order to enhance the mulch durability and to escape possible decomposition by microbes before planting.

Assessment of soil health
Soil samples were taken on 19 April last year during the fully developed growth stage of the summer cover crop stand, where after a Haney soil health analysis was done. Most nutrients that were available in the soil were effectively taken up by the cover crops.

The Haney soil health analysis (Table 1) shows the available N, P, and K in kg/ha in the field established by the warm season cover crops. The nutrient levels can be regarded as below average due to the degraded state of the soil. 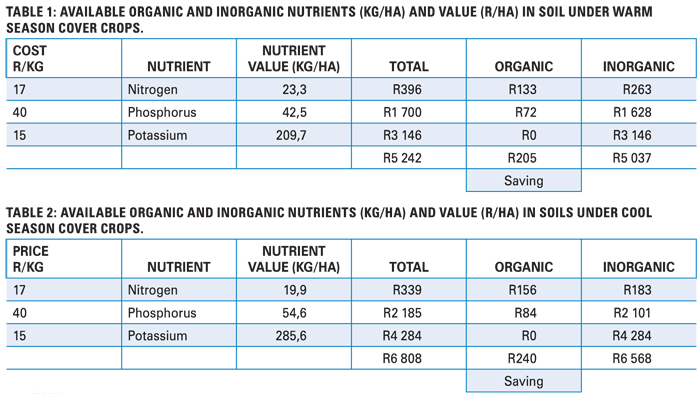 Table 3 shows that phosphorus saturation is below 5%, which indicate that additional inorganic phosphorus fertiliser is needed. With less than 1% soil organic matter, the soil can be seen as highly degraded due to a long period of continuous tillage practices.

The establishment of a multi-specie cover crop system is seen and applied as the start of a process to build up the degraded soil, which could take up to seven years or more, depending on the situation and the quality of CA application, the soil type and the climate. 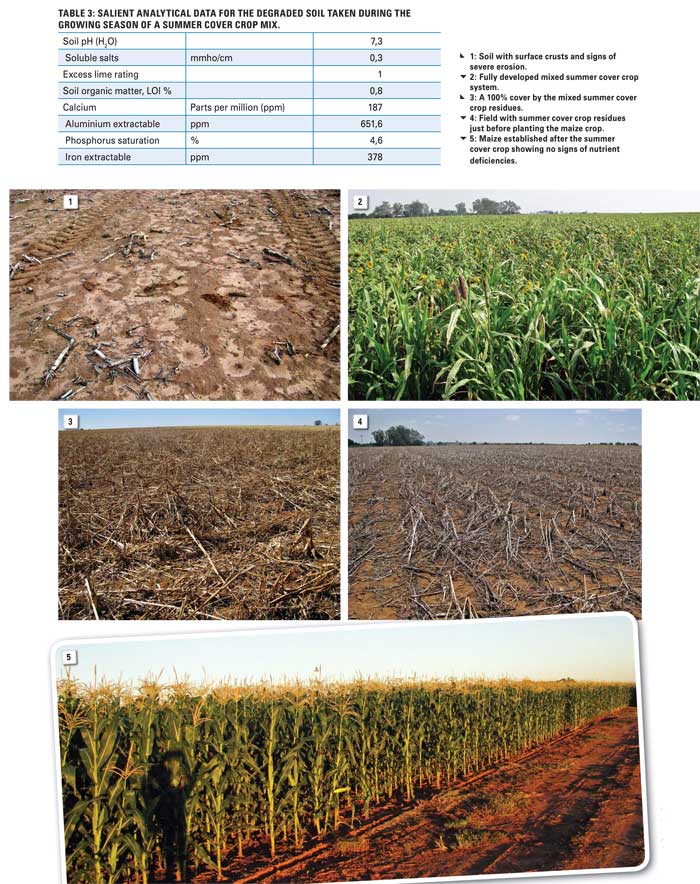 However, it is anticipated that this type of cover crop system, rotated every second year by a cash crop producing high volumes of residues (such as maize), could fairly quickly restore soil ecosystem functions and decrease the rehabilitation or transformation period to three or four years.

In a high temperature, low rainfall environment such as Ottosdal, the high volumes of cover crop residue would almost immediately have had a positive effect on the soil water content with much higher infiltration rates and much less water loss through evaporation.

During the following few years, the presence of a diversity of plant roots in the soil will most probably have a positive impact on soil microbial diversity and activity, including mycorrhizas, which are highly dependent on a host and living roots.

These effects are currently being measured in on-going research in Grain SA’s on-farm CA trials across the country. The establishment of perennial pastures is another possible solution, as part of the crop diversity within integrated crop-livestock systems, to facilitate the restoration process.

From a degraded soil to commercial maize production
In order to put this field back into maize production (as was the aim), the following fertiliser application rates (side dress) were used to establish the maize crop aiming for a 5 t/ha yield in the 2016/2017 season:

No further inputs as far as soil fertility management goes, were deemed necessary. This was due to a great supply of nutrients in the cover crop residues that will be made available as the cover crop biomass decomposes through microbial activity.

Photo 3, taken on 2 September last year, shows the cover crop residues (left standing) killed by the winter frost. A decision was made not to flatten it because of the positive effect the standing residues would have had on wind and water erosion. The cooler soil under the residue cover will also benefit the water cycle due to the lower evaporation from the soil surface.

Photo 4 was taken just before the maize was planted on 12 December last year. Note that the easy decomposable leaves containing the most nutrients were already decomposed by the micro-organism.

Only the woody plant material containing the less digestible tannins and lignin fragments in the residues was left. It is in decay or decomposition that this organic matter becomes useful as it becomes the fuel for ‘bacterial fires’ in the soil, which operates as a factory producing plant nutrients.

Photo 5 shows the maize crop at tasselling and silking stage with no signs of any nutrient deficiencies. The lower older leaves remain green. By April this year the predicted maize yield on this field was 7,5 t/ha, indicating by all standards to a successful regeneration (restoration) of a degraded soil into full maize production using the principles of CA and integrated soil fertility management.

A good tool to monitor soil fertility or the uptake of plant nutrients is leaf analysis (at this growth stage). Plant nutrient levels should match the values shown in Table 4. Leaf analyses taken at the start of the reproductive phase will show shortcomings. Correction might not be possible, but valuable knowledge for future fertility management will be gained.

Conclusion
This case study has demonstrated that CA facilitates the successful application of integrated soil fertility management, the recovery of critical soil ecosystem functions and the restoration of degraded soils. This process requires from producers a quality planning, implementation monitoring (e.g. soil and leaf analyses) and adaptation of CA practices such as fertiliser application, liming for an optimum pH between 6 and 7 (for maximum microbial activity), crop diversity and more specifically, multi-specie cover crop systems. It also requires an understanding of soil health and a long-term vision on soil restoration or regeneration, especially under dry and sandy soil conditions.