With the increase in food prices over the last two decades, more frequent food riots and related deaths in countries that cannot meet local food demand, have become a global tendency.

Wheat remains one of the most important food crops after maize and rice in the world. The world wheat yield gain is currently stagnant at 1% per annum, while it needs to be in the region of 1,7% to 2% to meet the requirements of the growing population.

With the latest prediction models, depending on which trend is followed, the world population will reach between 10,5 and 16 billion by the year 2100. The new 2050 prediction is that the world will need 65% more food than what is currently produced.

This situation is far worse on the African continent, as 80% to 90% of the global population growth is expected to come from Africa. At the current agricultural productivity, it is predicted that Africa will only be able to meet 15% of its food demands in 2050.

A general consensus amongst agricultural researchers around the world is that the current global financial balance sheet for Research and Development (R&D) funding into agriculture is completely out of balance and an area of major concern for the future.

With this depicted growing demand for food by the world population, there is a drastic need for more R&D investment into global agriculture. So, the question remains: Can we alter the expected path of these prediction models with a global dedicated wheat yield improvement research agenda?

What we learnt: Challenges of climate change to wheat production
Research findings show that wheat yields drop with every increase in average night temperature, suggesting an even tougher battle for breeders ahead. Wheat is not responding favourably to the average increase in CO2 levels.

The potential area for expansion to wheat production around the world is very limited. It is believed that the largest potential to increase global wheat production lies within emerging farmers of the developing countries of Asia and Africa. Research to improve the genetic yield potential of wheat is required to make the economics more favourable for the producers.

About IWYP
The International Wheat Yield Partnership (IWYP) was formed towards the end of 2014/2015. IWYP is a sub-initiated, but independent research programme of the International Wheat Initiative. Dr Jeff Gwyn (director: IWYP) and Dr Mark Sawkins (deputy director and research portfolio co-ordinator) based in Texas in the USA, in combination with their specialised research advisory committee, have been tasked with the difficult job to select needed research focuses for funded and aligned projects around the world.

Ultimately Drs Gwyn and Sawkins were appointed to manage and advise international funding bodies committed to the IWYP course to channel funds in the directions which is believed to give the needed scientific breakthroughs to achieve a significant jump in the genetic yield potential of wheat. IWYP members, its directors and scientific advisory board, promise to do things differently.

IWYP recently (20 - 23 March 2017) had its second Annual Scientific programme meeting in Obregon, Mexico where 60 wheat researchers around the world interactively met to discuss their latest research findings and the best collective way forward.

The ambitious mission of IWYP is to increase the global wheat yield averages by 50% by 2030.

Ms Bongiwe Nhlapho and I, both from ARC-Small Grain, had the opportunity to attend this second Annual IWYP meeting in Mexico, predominantly as a result of the funding received from the WCT capacity building initiative.

IWYP has the sole scope of improving the genetic yield potential of wheat through a series of high-risk/high reward research projects funded or co-funded by 13 international research and funding agencies.

Currently there are also nine private partners. The total value of the first eight IWYP funded research projects from the first call in 2015/2016 was around US million. The funded and aligned projects involve various institutions and research teams in the United Kingdom, Australia, United States, Mexico, India, Argentina, Spain and now also South Africa.

In May 2016 Dr Annelie Barnard and I contacted Drs Gwyn and Sawkins directly via a telephone conference with the intention to become a member of the IWYP community. We proposed a new project with the aim to increase wheat yields in challenging environments.

This project was evaluated by an expert team of researchers and now, almost twelve months later, South Africa is proudly represented and a contributing IWYP member through the aligned projects channel. This aligned project is the first representation of any South African or African research institute on the IWYP programme. 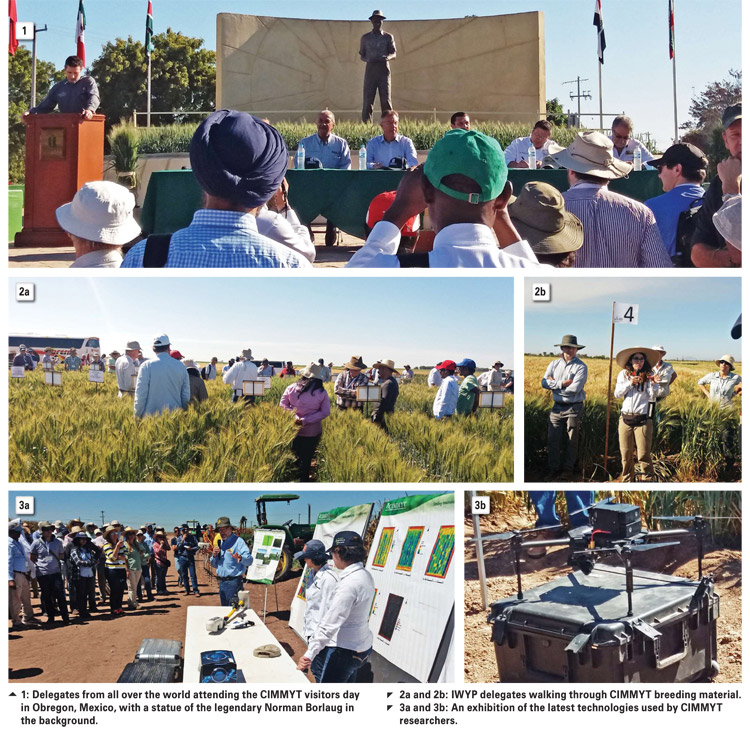 The science focus areas of the research projects from IWYP include:

These diverse funded and aligned research projects in the IWYP research portfolio have been tasked to chase the scientific breakthroughs in wheat research to achieve the large single event yield jumps required.

The privilege of being an aligned project of IWYP
Dr Barnard and I, in collaboration with Mr Willem Botes of the Stellenbosch University Plant Breeding Laboratory, have a national pre-breeding project titled Integrated pre-breeding for wheat yield improvement which has officially started on 1 April 2017. This pre-breeding project is jointly funded by the Winter Cereal

The research findings, germplasm identified and/or developed and certain responsibilities will also be shared with the other project collaborators and breeders from all three breeding programmes, namely ARC-Small Grain, Sensako and Pannar. A part of this larger pre-breeding project lead by me is now an official and accepted aligned project of the IWYP research programme (AP06) titled ‘Chasing wheat yields in challenging environments’. This project is expected to compliment and assist with marker and gene/trait validation of existing IWYP-funded project outcomes such as ‘Molecular dissection of spike yield components in wheat’ lead by Mr Cristobal Uauy (John Innes Centre, UK) and others.

It is also expected to assist with the development and identification of novel high yielding potential germplasm for the larger IWYP programme to be fed into the IWYP CIMMYT pre-breeding hub.

This germplasm development outcome is a critical part of the IWYP programme. These are the sort of project outcomes expected by IWYP from some of its aligned project members in the next five to ten years to give smaller but significant yield improvements compared to more longer term funded IWYP projects.

ARC-Small Grain is a proud national member of IWYP and a continental leader, set to represent the best interest of its wheat producers to improve wheat yield for the future.

CIMMYT and IWYP Hub
At CIMMYT Obregon, Mexico, there is a dedicated IWYP prebreeding hub that handles international material transfers, development, trait validation research and general co-ordination. If new traits or genes related to yield components are identified by IWYP members, these are first validated in existing IWYP and CIMMYT material to test novelty and value.

CIMMYT personnel, research fellows and students work on these international IWYP projects and material as collaborators capturing relevant data. During the CIMMYT open day and 50th Anniversary and Memorial celebrations of the great Dr Norman Borlaug, we were exposed to the latest breeding approaches, techniques and technologies currently used by CIMMYT breeders and pre-breeders to improve wheat yield.

The IWYP CIMMYT hub makes extensive use of high throughput phenotyping technologies in the form of drones fitted with hyperspectral and thermal imaging cameras. CIMMYT also makes use of its genotyping service providers to validate markers related to traits of interest coming from IWYP projects. These synergies supported by the IWYP hub allows for a better international collaboration and sharing of resources for a single common course of improving the genetic yield potential of wheat.

Benefits of being an IWYP member
This closed community of researchers sharing and collaborating in such an international manner is unique in the general science and research community, but especially in this globally important crop research.

The IWYP members’ platform allows for the secure sharing of data and new research findings with project leaders only on the dictated online storage infrastructure, databases and research tools. Being an IWYP member, we now have primary access to germplasm panels from all over the world as they are developed and identified by the research projects from the IWYP hub at CIMMYT.

The unique combination of a dedicated information sharing platform, used within and across integrated research projects, is meant to contribute to quicker researcher breakthroughs. This interactive platform allows for all scientists to add value to any project and learn from existing results and ultimately prevent duplication of work. As an IWYP member, we have the ability to contribute to the greater world wheat yield improvement ambition as part of the potential global food security solution.

Acknowledgements
I would like to acknowledge the co-funding received from the ARC and the Southern African Crop Production Society (SASCP), without which the travel would not have been possible. For additional information contact Dr Sydenham at ARC-Small Grain at 058 307 3408 or sydenhams@arc.agric.za or visit http://iwyp.org/.