Charcoal rot could be the next game changer

Climate change is definitely the new buzzword worldwide, with some viewing it as just another annoying scare tactic dreamt up by environmentalists, whilst others see it as part of the wheel turning in nature…it has happened before and it must happen again.

The reality however, is that research already conducted during 2009 demonstrated that South Africa has become approximately 2% hotter and at least 6% drier over a ten-year period which spanned from 1997 to 2006, compared to the 1970s.

The same research has indicated that for the country as a whole, each 1% drop in rainfall would most likely lead to a 1,1% drop in the production of maize and 0,5% decline in winter wheat.

Numerous other studies indicate the same, with the consensus that South Africa will most likely become hotter and drier than cooler and wetter. Together with this change, agriculture will face a new set of challenges with regards to biotic and abiotic stresses during crop production.

Factors such as drought, heat, frost, hail, wind and chemical burn, which negatively affect plant growth, are referred to as abiotic stress factors and are defined as the negative impact of non-living factors on the living organisms in a specific environment. Crops will have to adapt to conditions from heat and water stress to sunburn and shorter growing seasons.

These new growing conditions are also conducive for some biotic stress factors to flourish. Biotic stress refers to living organisms such as fungi, bacteria, viruses, plant-parasitic nematodes, harmful insects or parasitic plants that have a negative impact on plants.

When considering the impact of warmer and drier conditions on biotic factors, it is expected that some diseases and pests will become more prominent as the climate becomes hotter and drier. In this regard, charcoal rot might very well be the next game changer in the South African agricultural industry.

Most producers will be familiar with the symptoms of the aptly named ‘charcoal rot’. In general, plants would have a wilted olive green appearance – normally the tell-tale signs of problems in the roots and stalks. When cut open, the stalks have the characteristic charcoal discoloration at the lower nodes of the plant (Photo 1).

The blackish discoloration is due to the sclerotia (smooth, black survival structures) that is produced (Photo 2). Charcoal rot is caused by the fungus Macrophomina phaseolina (Tassi) Goid (Photo 3) and two important things about this pathogen makes it noteworthy. 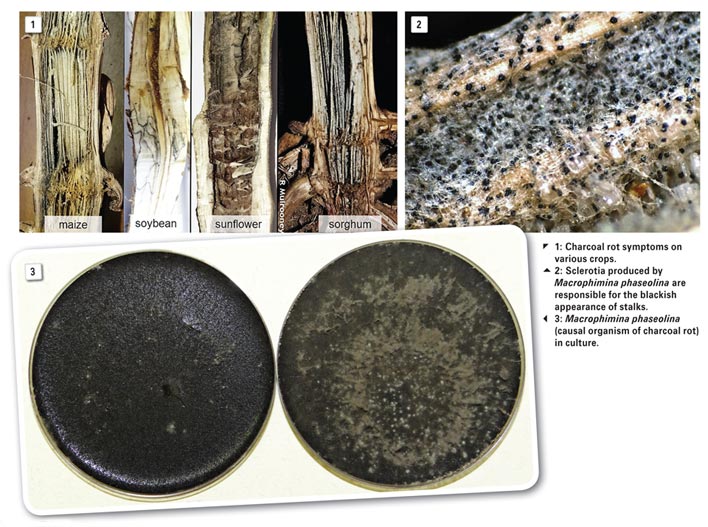 The first being the fact that it flourishes under dry, hot conditions. The severity of the disease has been documented to increase as ambient and soil temperature increases (28°C - 35°C), as well as when soil moisture becomes limiting.

A strong correlation has accordingly been observed between the occurrence of drought and the severity of damage to soybean due to M. phaseolina and according to most recent reports the area where the disease is occurring is increasing due to climate change.

The second important fact about this pathogen is its huge host range. Maize, sorghum, sunflower, soybean, cotton and tobacco are listed as some of the estimated 500 plant species that serve as host to the pathogen. And herein lies the dilemma. With such a large host range, crop rotation will not be an effective control measure, and with no chemical to remedy the problem, producers will have to be smart about tackling this problem. As all stalk rots are generally linked to stress conditions, the golden thread throughout the management of such a difficult pathogen is to limit the amount of stress the plant is exposed to.

As with many diseases, host resistance would be a feasible method to manage the disease. If such information is not available, ensure that the cultivar selected is well suited for the area, as such a hybrid will have a genetic advantage when having to cope with stresses. Resistance against leaf diseases, good stability, drought tolerance as well as a high yielding potential are all qualities that will give a cultivar a genetic advantage and could help to indirectly control stalk rots. Stick to the recommended plant densities as determined by the cultivar selected, soil fertility, available soil moisture as well as the production potential of the area. Too high plant densities and too narrow row widths will create stress conditions ideal for infection.

Although crop rotation will not specifically help to control charcoal rot, it will help to reduce inoculum levels of other stalk rot pathogens. Irrigation schedules are very important, especially post flowering. Research has demonstrated that stalk rot increased when water application was reduced or ceased before grain filling has been completed. In this regard conservation agriculture holds a great advance as the cover layer greatly assists in retaining moisture, hence making conditions unfavourable for M. phaseolina to infect.

Lastly, producers should not be caught off guard by stalk rots. Production should be monitored regularly, from approximate 30% to 40% grain moisture. The integrity of the lower nodes should be tested and should it be apparent that stalk rot is a problem, attempts should be made to harvest the plants as early as possible, as lodging will result in additional costs in order to get the grain harvested.

Producers are welcome to contact Dr Maryke Craven at 018 299 6100 with any further enquiries.