Soils are of central importance for delivering ecosystem services, such as food production and climate mitigation. These services depend heavily on carbon (C) sequestration and nutrient cycling, processes that are governed by soil biota or biology. Soil biology is the study of microbial and faunal activity and ecology in soil. However, soil biology is one of the most unexplored frontiers associated with understanding the dynamics of soil resources and their subsequent health or quality. There is growing recognition for the need to develop sensitive indicators of soil health and biology that reflect the effects of land management on soil and assist land managers in promoting regenerative conservation agriculture (CA).

Producers intuitively recognised the importance of healthy soils and have used qualitative terms (i.e. colour, taste, touch and smell) to describe soil condition and performance for crop production since the dawn of agriculture about 10 000 years ago. At the beginning of the 20th century, qualitative “life measuring” descriptions, however primitive they were, gradually became replaced by analytical procedures to assess and evaluate soil almost exclusively from the perspective of inorganic nutrients (chemistry) and crop yield.

In this article, a few soil biological indicators are discussed, which are part of a growing pool of analytical options gaining ground in measuring short term changes in soil biology or health inflicted by changes in land management. They are discussed in relation to actual field measurements done for different cropping practices evaluated in the Ottosdal CA project, which is funded by the Maize Trust (MT), implemented by the Ottosdal No-till Club and co-ordinated by Grain SA’s CA Programme. These cropping treatments (bare soil, monocrop, rotations, mixtures and natural grassland or veld) include cash crops (maize, soybean and sunflower), as well as cover crops (e.g. Dolichos lablab, grain sorghum, babala, black oats and mixtures).

Functional diversity (the diversity of species behaviours) is an indication of the biological status of soil microbial populations in soil, since it relates to the activities of soil micro-organisms contributing to soil biological processes. Various soil microbial activities fulfil critical functions in the decomposition of organic matter and biogeochemical cycling of nutrients such as carbon, nitrogen and phosphorus.

The Biolog® system is used to determine functional diversity of microbial communities. From these results, carbon source utilisation profiles (CSUP), i.e. the functional diversity of soil microbial populations, were determined by using the amount and equitability of carbon substrates utilised as indicators of richness (Shannon-Weaver index or the number of active microbial species present) and evenness (Evenness index or microbial abundance), respectively. 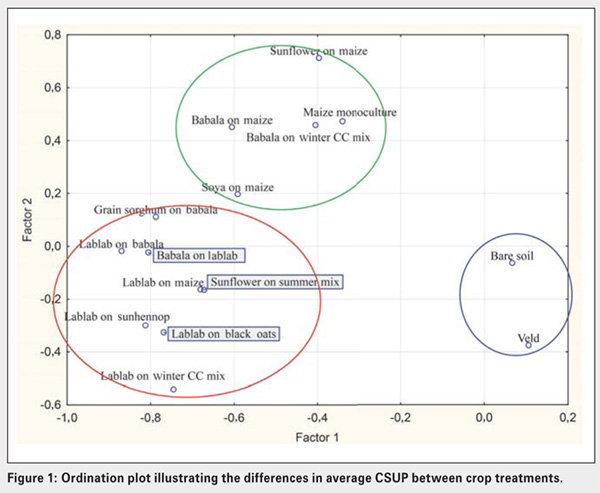 Significant differences exist between the amount and types of carbon sources utilised by soil microbial populations present in bare soil and veld (natural grassland), lablab, grain sorghum on babala and babala on maize treatments. The number of active microbial species present in veld and bare soil, maize monoculture and maize-soybean crop treatments were low compared to the rest (Graph 1). Microbial abundance was significantly higher in lablab on sunhennop than in the bare soil and veld treatments (Graph 2). Microbial communities present in the latter treatments are thus less diverse and dominated by specific microbial species, implying a state of imbalance. 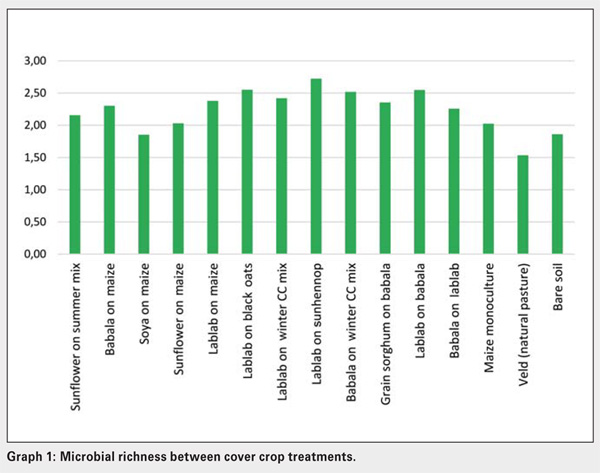 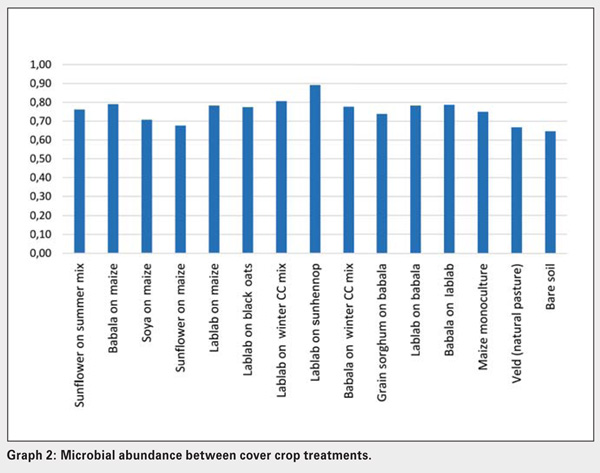 The ability of soil microbial populations to mineralise organic carbon, phosphorus and nitrogen, is measured by the ß-glucosidase, phosphatase and urease enzyme activities in the soil. By implication, the higher the microbial activity, the faster the nutrient release from organic substrates available for plant uptake. Enzyme analyses done for these crop treatments have been aggregated (averaged) to evaluate soil microbial activity (see Graph 3). 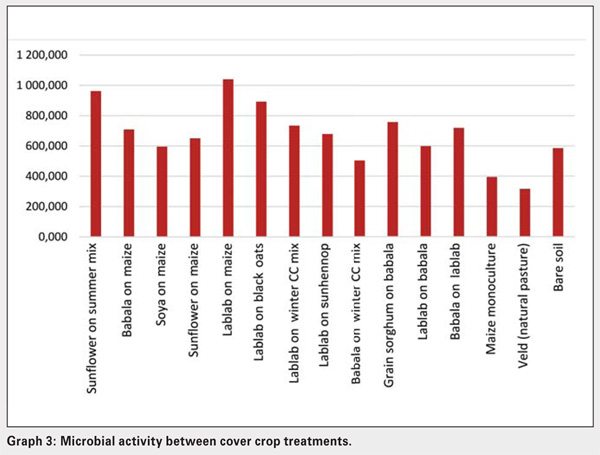 The legume cover crop (lablab) elicited significant differences in the potential of soil microbial communities to mineralise carbon, phosphorous and nitrogen. The lowest overall enzyme or microbial activity was present in veld, maize monoculture and babala on winter CC mix treatments, whereas the highest overall activity was present in lablab on maize, sunflower on summer mixture and lablab on black oats treatments. Despite the same cover crops being planted, but in different sequences, microbial activities differed significantly between lablab on babala and babala on lablab. The latter demonstrated the highest overall microbial activity.

Solvita® soil test provides the ability to measure soil biology and evaluate your soil management practices. With Solvita soil tests, soil labs, producers and crop consultants have the capability to easily measure soil CO2 respiration and reserve organic nitrogen; important indicators of soil fertility. Being able to evaluate the turnover of organic matter via CO2 respiration is important for a number of reasons:

Indicator of soil health
The rates of CO2 release is generally regarded as an indicator of soil health and is favourably improved with practices such as cover cropping, where the quality of soil is improved by building the organic matter through accumulation and decay of roots and plant litter as well as the synthesis of glomalin through Mycorrhizae fungi association with the plant roots, facilitated through photosynthate exudates as the food source.

Indicator of soil nutrients
The rate of carbon exchange can be used to estimate the potential release of nutrients such as nitrogen and phosphorus that are components of soil organic matter. This Potential Mineralisable Nitrogen (PMN) is intended to help Solvita-users interpret their CO2 Burst results to assess how this previously unmeasured organically bound Npool can help decrease fertiliser costs. The positive correlation that exists between the PMN through microbial action and Solvita 24 hour CO2 Burst test has been demonstrated by several researchers as well as commercial Agro Analytical Laboratories.

The Solvita CO2 Burst test was therefore used as an indicator of the biological factors present in the same fifteen soils under different soil management strategies or crop treatments in the Ottosdal district (see Graph 4 and Graph 5). Note the differences between cover crop and cash crop treatments, but in particular the monoculture and bare soil exhibited the lowest respiration rates, while the lablab summer legume treatments showed the highest respiration. Solvita tests effectively identify positive changes in soil management and can track these changes over time. What is significant is the positive correlation when soils are planted with cover crops in maintaining the soil microbial diversity, which has been supported by the Solvita CO2 burst test results shown in Graph 4. 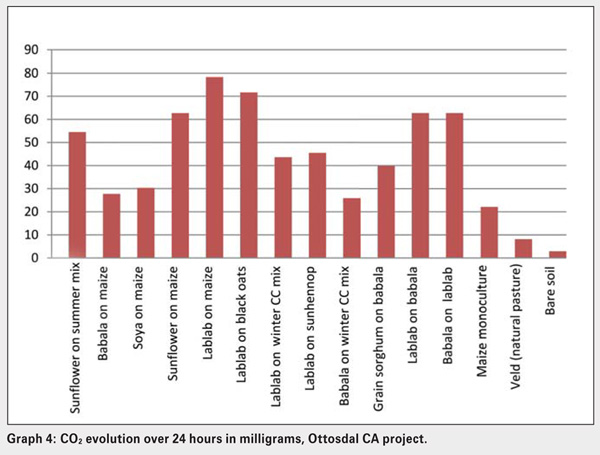 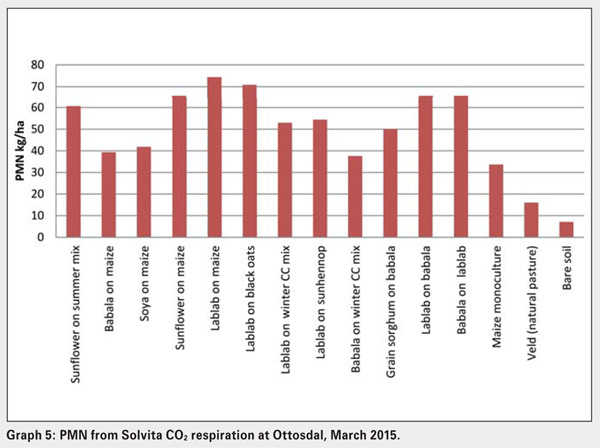 Particulate organic matter (POM) refers to all soil organic matter in the soil smaller than 2 mm and larger than 0,045 mm in size and it is considered biologically and chemically active.

In addition, this organic matter is either in free form in the soil (i.e. not chemically or physically bound to soil particles), or it is captured inside soil aggregates, which can be released when aggregates break up in water. POM is therefore part of the so-called “labile” or easily decomposable pool of soil organic matter and is the most vulnerable fraction of organic matter in terms of decomposition by micro-organisms.

POM can serve as a biological indicator of soil quality since it is a source of food and/or energy for micro-organisms and soil animals, while it also provides nutrients for plant growth. It further enhances soil aggregate stability, water infiltration and soil aeration.

POM is sensitive to soil disturbance and therefore a further indicator of the level of soil disturbance or the predominant cultivation practices. When changing from conventional tillage to no-till in conjunction with mulching and crop rotation/cover crops, it is expected that the POM fraction in the topsoil will gradually increase over time, although this is dependent on the amount of clay (the more clay, the easier it is to accumulate POM), water (the drier the soil and the climate, the slower POM accumulates) and temperature (the warmer the climate, the slower POM accumulates).

POM generally decreases with depth in the soil, mainly due to the larger input of new organic material to the topsoil through mulching. This layering is more pronounced under no-till conditions where the added organic material remains largely undisturbed in the soil surface layer where POM is built-up. To illustrate this point, Graph 6 shows the carbon (mg) contained in 5 g of soil from two different farms in the Ottosdal district. Farm 1 has been under CA for one year and Farm 2 for six years. 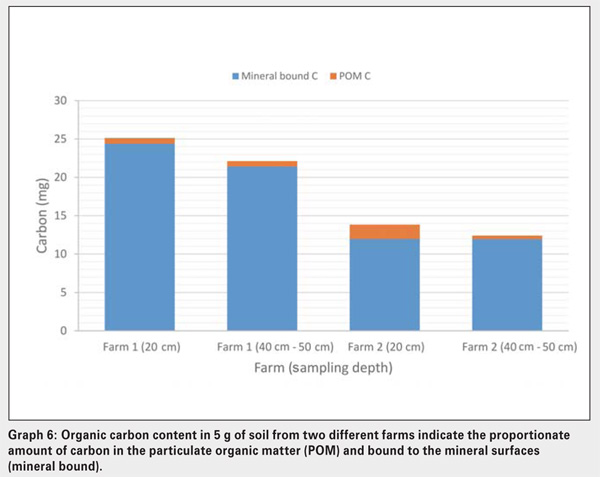 The soil from Farm 1 clearly has higher levels of organic carbon per 5 g of soil compared to Farm 2. There could be many reasons for this, one of which may be the fact that Farm 1 has a higher clay content (18%) compared to Farm 2 (8%). However, it is important to note the difference in the carbon fractions between the two soils.

On Farm 1, the amount of carbon contained in POM is the same at both sampling depths, while on Farm 2 the carbon contained in POM is clearly higher at 20 cm (1,9 mg C) than at 40 cm - 50 cm (0,5 mg C). It is clear that Farm 2, despite having sandy soils, has built-up POM in the topsoil, due to a build-up of organic matter inputs through a longer period of mulching and reduced soil disturbance.

All the soil biological indicators described above were sensitive enough to reflect the effects of land management on soil health, which will assist land managers in adapting to regenerative CA systems. These indicators were able to demonstrate important factors, such as the role of cover crops in increasing soil quality; 70% of the cover crop treatments demonstrated a higher soil microbial diversity and activity compared to veld and bare soil treatments, as well as mono-cropping and short crop rotations (e.g. maize-soya).

CA is beneficial to soil biology, but practices such as cropping sequence or combinations should be carefully tested to guarantee the maximum improvement in soil biology in the shortest possible timeframe. Indicator trends in soil biology, such as microbial diversity and activity, soil CO2 respiration and POM, should be monitored over time to attain a more complete understanding of the impact that different farming practices might have on soil health.