CANOLA – planning for the new season

The most successful farmers are those that do the best planning. Leave as little as possible to chance and make sure you have the best information possible to assist you in making the best decisions possible. Consider the following factors when planning canola for the new season.

What lands to plant to canola
There are many factors that must be considered when deciding what lands are to be planted to canola in the coming season. The recommendation is that canola should only be planted every third or fourth year on the same land, especially if either black leg or Sclerotinia occurred in the current season. Furthermore, canola should preferably not be planted within 500 meters of a field in which the diseases occurred in the current season.

Many farmers still use canola as a tool to manage herbicide resistance, especially of grass weeds, in lands that have been planted to cereals for a number of seasons. Canola enables farmers to use herbicides with a different mode of action (moa) to control weeds that have developed resistance to the herbicides normally used in cereals. Rotating chemicals with different moa's is a good anti-resistance strategy, making the incorporation of canola in a crop rotation system an important management tool.

The second important consideration is to determine whether the herbicide used the previous season will not have residual problems that could damage the canola seedlings. Make sure that the withholding period indicated on the product label indicates that it is safe for planting canola. Canola is particularly sensitive to the sulphonylmethyl (SU) group of herbicides and the withholding period for different SU's ranges from nine months to two years.

Problems with diflufenican residues have also been noted over the previous few seasons. After seasons of below average rainfall the threat of product residue carry-over is increased because less leaching of product from the top layer of soil will have occurred and soil microbial activity, which is responsible for breaking down many products, will be reduced in drier soils.

The third aspect to be considered is the amount of plant residue which remains on the soil surface after harvest. Good agricultural practise encourages the retention of as much mulch on the surface as possible, but too much material, especially in big clumps which often occurs when straw is not cut into shorter lengths, can cause problems for germinating canola seedlings. Heavy straw loads over the planting row results in retarded germination due to cooler soil temperature under the straw which makes the seedling more prone to disease or insect damage. A further problem is, because the seedling must grow through the straw layer before reaching sunlight, it results in long, spindly plants which have less chance of survival.

Consider baling excessive straw after harvest. Should a farmer prefer to maintain residue on the surface until just prior to planting canola, then other techniques must be employed to prevent clumps of straw remaining on the land. By cutting the straw into shorter lengths at harvest it can be more easily spread evenly over the land. Dragging tyres or other implements over the surface before planting also helps to break up clumps and spread the residue.

Finally, canola should not follow lupines in a rotation system as both are hosts to Sclerotinia and this greatly enhances the risk of infection in the canola. 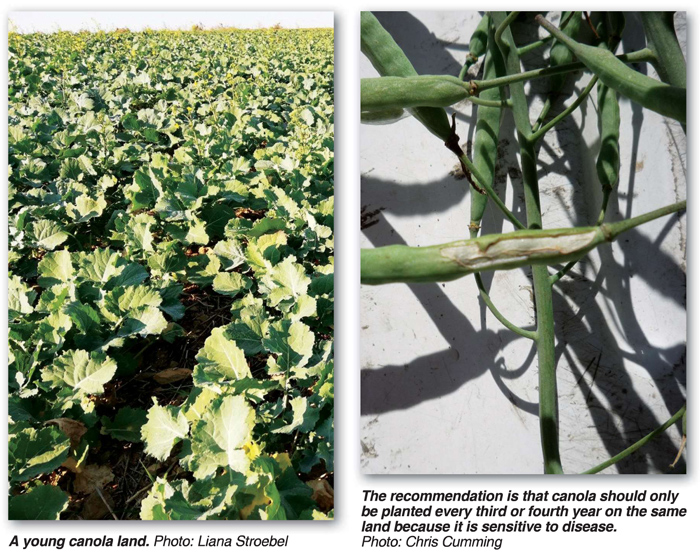 Decide what canola cultivars you intend planting in the next season
Excellent information is available from the cultivar evaluation trials conducted by the Department of Agriculture Western Cape every year. Select cultivars that have performed consistently in your production area over a number of seasons. Order the seed as early as possible to avoid the disappointment of not being able to plant the cultivars of choice.

Remember to select Clearfield (CL) or triazine tolerant (TT) cultivars should you intend to use either imazamox or a triazine herbicide on the canola.

Plant a basket of cultivars which differ in their physiological development tempo. This enables the farmer to spread the optimum time to conduct different strategic activities, such as topdressing, spraying diseases or optimum time to harvest for the different cultivars, making management decisions easier. By not putting all your eggs in one basket also reduces risk.

Should you determine your fertiliser programme on soil analysis, get soil samples taken timeously to ensure recommendations can be made in good time.

Keep lands intended for canola planting in the new season weed free, especially from volunteer canola plants and other weeds, like ramenas and wild mustard, that are hosts to pests and diseases that also occur in canola.