Canola – Factors to consider during April

2020 is well on it’s way and the Southern Cape has been blessed with good rains over an extended area. This means that weeds will be germinating which host pests and diseases.

Cutworm damage was widely reported this past season, causing damage to young canola stands. Eliminate weeds that can serve as refuge for the cutworm moths to lay eggs and aphids to start building colonies. These weeds also utilise precious underground moisture that we must conserve for this year’s crop. These weeds can be eliminated either by shallow cultivation or chemically.

CHEMICAL USE
The products of choice, glyphosate or paraquat, must be utilised judiciously as the overuse of chemicals with the same mode of action can lead to the development of herbicide resistance. Glyphosate, especially, tends to be used more than once in a season on the same land and many reports of ryegrass resistant to even high rates of glyphosate have been reported in the Western Cape. Should resistant ryegrass occur alternate with paraquat, which has a different mode of action. Consideration can also be given to the so called ‘double knock’ system developed in Australia, where a glyphosate spray is followed by a paraquat application 10 to 14 days later. In this way weeds not controlled by the one product will be killed by the other.

SUCCESS
I trust that any farmer intending to plant canola this year has procured good quality seed of cultivars that are well adapted to his region. The success of canola production has its foundation in achieving an even and uniform stand. Even refers to plants evenly spaced over the soil surface with no bare patches. This will contribute to suppression of later germinating weeds, something that canola’s growth habit can achieve better than any other crop. Uniform refers to canola plants all being the same size, which in turn will make many management decisions, i.e. time for topdressing, fungicide spraying or when to windrow so much easier. That is why I consider the period just prior to planting and the planting process the most important in canola production.

FACTORS TO CONSIDER
There are many factors to consider when deciding on what canola cultivars to plant. Obviously, seed of the cultivar of choice must be readily available. Some cultivars that have performed well in the cultivar trials conducted by the Department of Agriculture, Western Cape only become freely available in the second or third year. When deciding on a cultivar, look at more than one season`s performance. If the cultivar has performed well in different regions, it is an indication of adaptability.

Cultivars
The PNS recommends that, as far as possible, farm retained seed should be avoided. The hybrid cultivars have proved that, under favourable conditions, yields of in excess of 3 t/ha can easily be achieved. Hybrid vigour, however, is not retained in second year seed resulting in yield penalty, higher risk to fungal diseases and uneven growth and ripening. Rather consider planting at a slightly lower rate of seed per hectare (2 kg/ha to 2,5 kg/ha) before saving money by planting farm retained seed. A stand of 30 to 40 plants per m² is more than sufficient to produce above average yields.

The conventional and Clearfield (CL) resistant cultivar groups have a higher yield potential than other cultivars and their growth mass contributes greatly to weed suppression. The triasine tolerant (TT) cultivars produce less bio-mass, which implies that a higher stand count is required. Although the TT`s tend to produce lower yields than the conventional or CL cultivars, they are popular where sulfonylurea (SU) resistant weeds occur.

In regions with a high blackleg disease risk, select cultivars with a higher blackleg resistance rating, as supplied in the Department’s trial results. The use of farm retained seed, with a low blackleg tolerance, can result in up to 50% yield losses. There are currently no cultivars available with Sclerotinia resistance. Monitoring and preventative sprays, should conditions become favourable from just prior to flowering (cool, wet conditions), must be utilised.

Climate
In the 2019 season canola that was planted early generally outperformed later planted canola. There is no guarantee that the 2020 season will follow the same climatic pattern as last year, but due to global warming and unmistakeable changes in our rainfall distribution, it makes sense to establish a good stand early. Canola in the vegetative growth stage can survive extremes in rainfall and temperature and, as has been proven time and again, can recover when conditions improve to give at least an average yield. One of canola’s major advantages is that it spreads a farmers risk profile in that cereals tend to determine yield potential at an early stage (as early as the 5-leaf stage), whereas canola, with its indeterminate growth pattern, can take advantage when later rains occur.

Coverage
Although conservation agriculture is well established in the Western Cape, one of the primary aspects of the system is maintaining a good coverage of plant material on the soil surface, which is not conducive to establishment in the early seedling stage. Small seeded canola does not have the required seed reserves to easily grow through a dense stubble mulch on the soil surface, often resulting in long, spindly seedlings which are more prone to both insect pest and seedling diseases. The answer would be to retain good soil coverage until as close to planting of canola as possible and then to reduce the load by grazing, baling or dragging a harrow or tyres over the land to spread and reduce the stubble load. The aim is to have an even spread of stubble over the land without heavy clumps of stubble that can be problematic with the planting process and also retard germination of the canola. Heavy loads of stubble reduce the soil temperature resulting in slower germination and longer exposure to insects and diseases.

Pests
Stony and cooler south facing slopes are more prone to snail and slug infestations. By inspecting the lands by looking under clumps of stubble, preferably early in the morning, one often can determine what pests are present. Another method is to place a plastic sheet (empty fertiliser bag) or damp hessian bag on the soil for a few days to monitor for slugs or snails. This will make the decision regarding the application of snail bait easier.

CONCLUSION
Use this time prior to planting to ensure that the planter is in top condition. Planting depth is critical to ensure a good, even stand. Uniform emergence eventually ensures uniform ripening with minimum seed losses during harvest. Best results are obtained with a uniform planting depth in moist soil. A planting depth of 1 cm to 2 cm is generally ideal. Canola seeds are small, making it important to ensure good contact between the seed and soil. A press wheel is used to assist in ensuring good contact. Starter fertiliser should not come into contact with the seed in the plant furrow. Fertiliser can either be placed below the seed or away from the seed to the side. Good luck with the year ahead and may we be blessed with a ‘normal’ season and abundant rains. 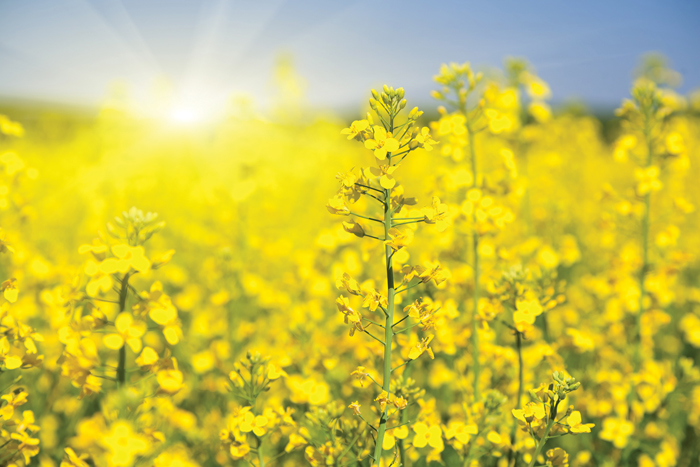