Grain SA initiated a conservation agriculture (CA) research project in the Vrede area with producer collaboration from the Ascent Study Group. Other role-players such as VKB, ARC and Vermi Solutions also got involved to assist with different technical aspects of the project, which were started during the planting season of 2015/2016. The project is funded by the Maize Trust.

The producers decided that demonstrative type of trials would suit them best. Strip trials were thus planted by a few producers who used different tillage practices on their various farms. The focus was on maize, but soybeans were also planted.

Plant density (which is here used as a function of plant population and row width) was identified as one of the key crop production elements to be investigated. Maize row widths that were investigated on different farms consisted of the following: 0,91 m, 0,76 m and 0,5 m rows.

There are various reasons for plant density to be of particular interest to CA projects such as this, the main reason being that covering of the soil and most effective use of sunlight energy and water are of utmost importance in CA systems.

Conventional wisdom suggests that higher canopy cover and hence radiation interception and green water use (water loss or use through transpiration by plants) will be more effective under higher crop density conditions.

Another important consideration is the spatial distribution of roots in the soil that is affected by row width. The better the roots are spatially distributed the better the water and nutrient uptake in the entire soil profile, which is correlated to positive changes in soil health parameters due to the effect of plant roots, such as soil porosity, root channels, soil organic matter and improved soil structure.

Improvements in these parameters will help to increase water infiltration and root growth in a soil that is typically not tilled under CA conditions. Finally, higher crop densities can improve the distribution and amount of crop residues after harvesting, which will have a further significant impact on soil health and yield over the longer term.

Crop density trials were planted by the producers to ascertain whether cultivation practices (tillage, strip-till and no-till) may lead to different crop density recommendations. There were quite a few factors and practices that differed between the producer- managed trials, but it is envisaged that the important reactions and influences of various treatments, such as plant population and row width, will become clear over time.

This study also includes results from an onfarm trial where maize was planted directly after winter cover crops. Some results of soybean trials will also be presented here.

Maize plant density trials
Yields for the different plant density trials are shown in Graph 1. It was a very difficult year due to early season droughts which caused a lot of the variability that was observed. Rainfall normalised during the latter half of the season. 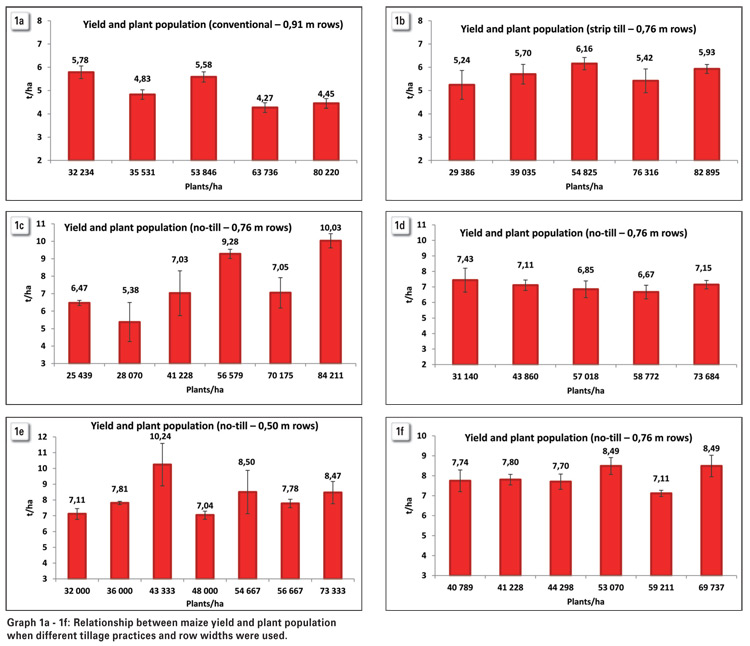 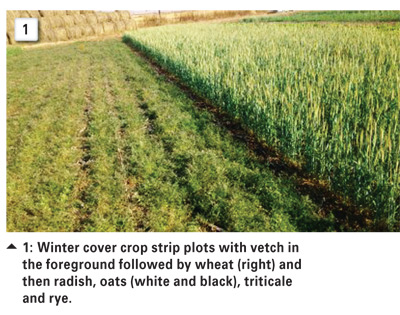 Although Graph 1c to Graph 1f show mean yields of more than 7 t/ha for no-till maize as compared to less than 6 t/ha for conventional and strip-tilled plots (Graph 1a and 1b), it will be premature to come to final conclusions regarding cultivation practices after only one year’s data.

Graph 1c (farm with the longest no-till history) tends to suggest persistent yield increases up to the highest plant population. Long-term monitoring will clarify this observation. 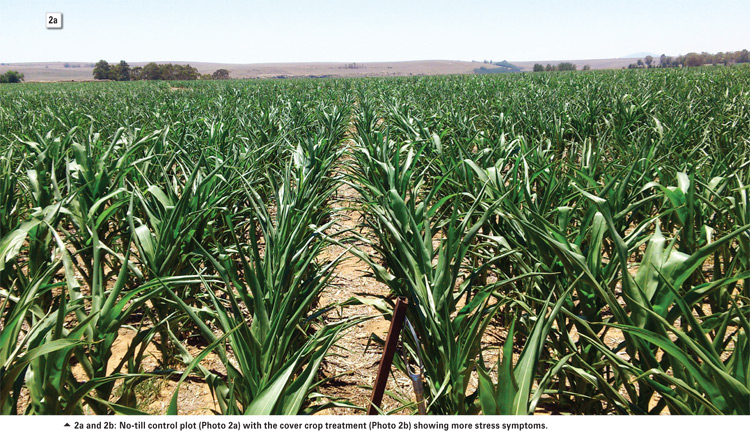 Photo 2 shows how the cover cop treatment lagged the control in terms of development (height) and more water stress symptoms can be seen in this treatment. The cover crop treatment remained behind and flowered one and a half weeks later than the control. The rainfall pattern returned to normal after flowering and grain filling progressed unhindered afterwards.

Graph 4 shows no significant maize yield differences between the cover crop treatments and the no-till control except for the low yield of the radish treatment in 0,5 m rows. One of this treatment’s replicates was an outlier that resulted in the low mean yield. The other radish treatment in 0,76 m rows doesn’t show that radish decreases yields. 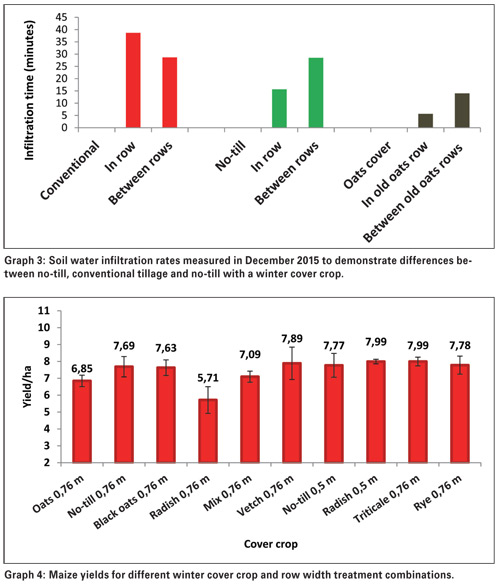 Soybean yield and row width
The year under consideration (initially dry) favoured narrow rows in terms of soybean yield as illustrated by Graph 5 and Graph 6. Yields for an early maturing cultivar increased from 3,11 t/ha in 0,76 m rows to 3,83 t/ha in 0,5 m rows (Graph 5).

The comparable increase in a factorial experiment with four cultivars was from 3,1 t/ha to 4,3 t/ha (Graph 6).

Another trial was planted late but the narrow row effect was much smaller here (data not shown). Early frost interrupted the growing season of the longer season cultivars in that experiment which confounded the results.

Conclusions
Only one year’s data is available for the Vrede CA study area in Ascent, but the results are very promising. It was shown that one of the beneficial effects of cover crops under no-till is an increased water infiltration rate.

The general belief that winter cover crops are not suitable for this area was shown to be invalid. The soils of this particular area are shallow with a high clay content and it seems as if tillage practices leaving the soil bare will dry the soil to the same extent that a cover crop will, but without the additional positive effects on soil health and infiltration.

The data suggests that better infiltration rates and timely rains during the following growing season will alleviate any initial dryness effects that winter cover crops might cause. No-till plots had generally higher yields than other practices, but longer term data will be needed to confirm this finding.

Neither positive nor negative row width effects on maize yield could be shown with certainty, but there was a definite positive narrow row effect on soybean yield. Narrow rows were expected to favour soybean yields for this year because plants were stunted by early season drought. It is possible that yields might not be better in narrow rows during a high rainfall year, but even then it should still be beneficial in terms of better distribution of roots and increased water infiltration for follow-up crops in the no-till system.

The impact of CA should be viewed holistically and over the long term. Economic analyses will be conducted by VKB, which is important to persuade producers. Furthermore, several soil health parameters are also monitored, since it is the basis for the success and improvement of these mixed farming systems over the long term. These results will be presented in following articles.