CA proofs to be key in sustainability of grain systems

A number of producers in the Vrede area are participating in a Grain SA Conservation Agriculture Farmer Innovation Programme (FIP) research project, which is funded by the Maize Trust. This article will put the spotlight on the farm Skulpspruit of Mr Izak Dreyer where CA has been done for five years.

Some experiments with winter cover crops were done in strip plots during the winter of 2015 and the results of the following maize crops were shared in the March 2017 edition of SA Graan/Grain. Those results were so convincingly positive, even for a year when extremely dry conditions prevailed for most of the summer, that Dreyer immediately stopped experimenting and started implementing cover crops on a much bigger scale.

Mixed winter cover crop systems were subsequently planted after his soybean. Livestock was then used to utilise the cover crops during the winter months to produce beef to the net margin of roughly R3 000 (2016) to R7500 (2017) per hectare.

This article will report on the most recent findings since winter cover crops and livestock were integrated into the farming system in 2016.

CA and rainfall use efficiency 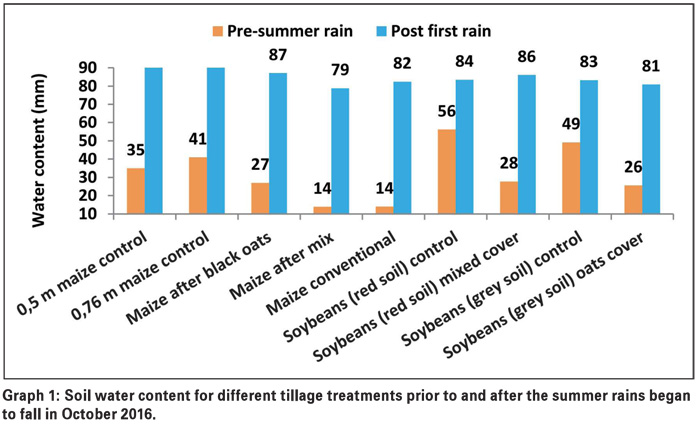 Graph 1 shows how various treatments influenced the water content of soils. The pre-summer rain observations were made three weeks before the rainy season commenced. It can therefore be assumed that the treatments with no-till winter cover crops almost completely dried out the soil prior to the first rains.

Cover crops treatments were almost as dry as the tillage treatment. The no-till soybean control treatments were significantly wetter than the cover crop treatments. Soil water content during September and most of October 2016 was lower than the comparable levels measured the previous year because of below-average rainfall.

The control treatments where maize was grown the previous year had generally drier soils than the soybean fields. This would be expected since maize grows well into autumn as opposed to soybeans that are harvested early (end of March) allowing more soil moisture conservation.

Graph 1 indicates that soil moisture conservation through winter fallow systems (compared to full utilisation with winter cover crops, i.e. a green fallow system) was not essential. The first summer rains fell over a period of three days during the latter half of October totalling almost 70 mm, which is almost equal to the long-term average for October. Graph 1 also shows that this first rain wetted all treatments properly (effective soil depth is 60 cm).

It took until the last week of January the previous year before rain showers increased to levels that were sufficient to eliminate soil water differences.

It was previously shown that water infiltration rate improved on the no-till fields and it increased even more where winter cover crops were planted. Those results and excellent yields indicated that there were no soil compaction problems. Nevertheless, more soil compaction studies were done to improve producers’ and scientists’ understanding of this topic.

In the absence of penetrometers that can measure compaction in a direct way, rooting patterns and bulk densities were consequently investigated.

CA and soil compaction
Photo 1a and Photo 1b shows a soil profile with rooting characteristics in a maize field that has been no-tilled for five years. Soybeans were grown the previous summer and a winter mixed cover crop preceded the maize. 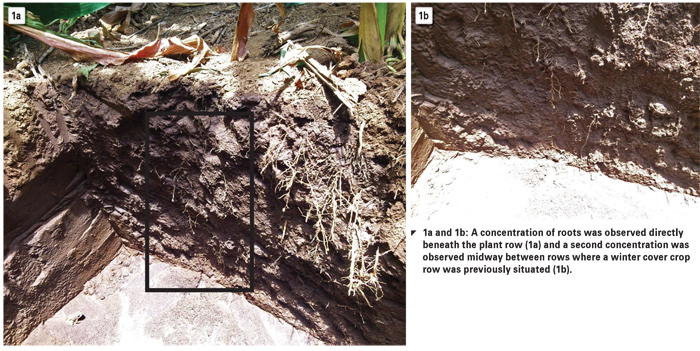 These observations could suggest that old root channels were used by the maize roots to reach and fully exploit the effective rooting depth. Soil bulk density measurements confirmed that the soil porosity would have been supportive for easy root growth. These measurements in fact, suggested that soil porosity was improved by the CA practices followed on this farm.

Bulk density was determined at a depth of 30 cm comparing measurements of the no-till soil with a tilled soil of a neighbouring farm. The clod and wax method was used (Photo 2) on clods that were sampled under the tractor wheel tracks where compaction was supposed to be the greatest. 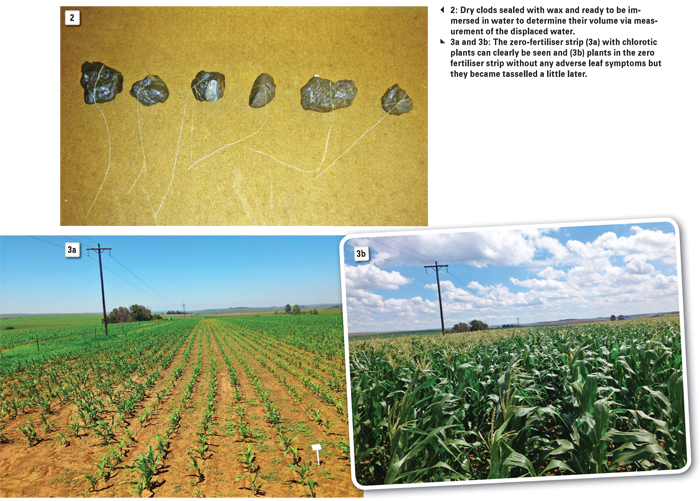 Bulk densities were 1,3 g/cm3 and 1,6 g/cm3 for no-till and tilled soils respectively. This indicates that the no-till soil is more porous and less compacted and defies the conventional wisdom that tillage to a depth of 45 cm is needed to alleviate the compaction in this area.

On the contrary, tillage destroys soil structure and root channels leading to compaction, lower infiltration rates and less soil water. Micro-organisms that are necessary for enhancing and preserving soil structure, porosity and aeration, are also disrupted, sustaining the destructive spiral of tillage practices.

CA and plant density
A plant population trial on the farm indicated that yield potential had increased beyond the point where the traditional norm of 40 000 plants/ha could utilise the season’s full potential. It should be noted that total rainfall was below normal at approximately
580 mm.

In this light, the current year’s high yields were very satisfactory reaching record yields in some cases. Graph 2 shows that yields of a little less than 8 t/ha were possible with approximately 40 000 plants/ha. It can be assumed that the potential was even higher (9 t/ha) under higher plant populations.

This farm’s practice is to use 45 000 plants/ha, which is already higher than the norm for the area, but probably not high enough to match the higher potential under CA systems.

The following factors generally contribute to an increased yield potential under CA:

Photo 3a shows the crop chlorosis shortly after emergence in a plot receiving no fertiliser, because of a decreased amount of chlorophyll in the leaves, often as a result of nutrient deficiency. However, the yellowing on these plots disappeared soon after with the only lasting effect delayed flowering (see Photo 3b).

The following could be the reasons why the initial chlorosis was observed: 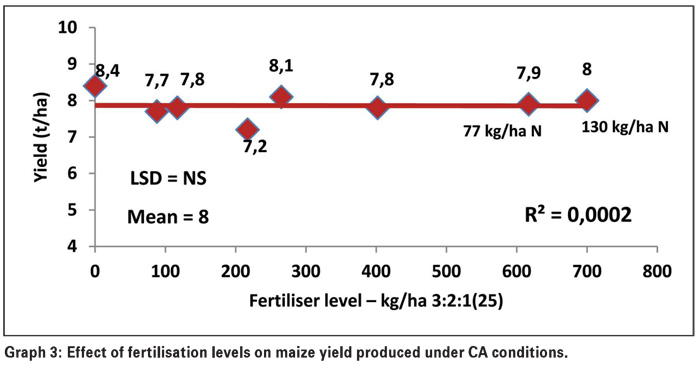 Whatever the case may be, Graph 3 shows how little the yields varied over different fertiliser levels ranging from zero fertilisation to 617 kg/ha of a 3:2:1(25) mixture. The plot without fertiliser was eventually not hampered in terms of grain
production.

The highest nitrogen (N) level applied was 77 kg/ha (N), which is relatively low. The last value in Graph 3 (8 t/ha) depicts the yield of a control treatment representing the normal farm fertilisation practice where a total of 120 kg/ha N was applied. No yield difference was observed between this treatment and treatment with no fertilisers.

The findings of this fertiliser trial were generally confirmed by another fertiliser trial in the study area for which results are not presented here. The second trial was done with only variable N levels. The plant populations of these trials were 45 000 plants/ha.

According to the plant population trial an upper yield limit of approximately 8 t/ha had been set. Due to this fact increased fertiliser levels could not increase yields beyond this point. It is extremely significant that the yield limit could be reached without added fertiliser.

Conclusions
Results from the Ascent (Vrede) CA trials for the 2016/2017 season presented in this article, showed a range of positive impacts on soil health, soil compaction, rainfall use efficiency, reduced need for fertiliser and sustained high yields.

Under the current difficult economic situation for grain producers and major environmental threats, such as soil erosion and climate change, CA would have a significant positive effect on the sustainability and profitability of crop production systems in the Vrede area if it is to be scaled out to many more producers.