Soil health, which can be defined as the ability of the soil to function as a vital, living ecosystem that sustains plants, animals and humans, is closely linked to soil organic matter. It takes time for conservation agriculture (CA) principles implemented in a cash grain crops rotation to impact positively on soil health. In some cases soil health can even stagnate.

In this article the following CA aspects under investigation at the cover crop screening trial on the farm Humanskraal, Ottosdal area, will be discussed: Maize grain yields, water use efficiency, soil organic matter and the role it fulfils in regenerating the soil with the co-operation of microorganisms.

An integrated livestock-cover crop system as part of a cash crop rotation as a possible vehicle to speed up the improvement of soil health, is also scrutinised. Regenerating the soil in the transitional phase of CA should be prioritised. The message of ‘restore before you conserve’ should be loud and clear.

Grain yield and water use efficiency
Maize grain yields under normal circumstances are closely correlated with rainfall. The average rainfall for the Ottosdal region in the long-term is just above 500 mm. Studying Graph 1, it is clear that in the past five years there were no normal rainfall patterns.

For maize to produce grain, a minimum rainfall of 230 mm rain during the growing period is necessary to produce enough biomass to support grain yield.

After sampling the maize total biomass and determining the dry matter percentage (DM%) for all treatments in the screening trial, maize grain was calculated by dividing the dry matter yield by two. This was done based on the theory that maize has a harvesting index of 50%. Water use efficiency was calculated by dividing the estimated grain yield of the different treatments by the total effective rainfall for 2017.

Effective rain for the past year (2017/2018) resembles the amount received in the 2014/2015 season, when grain yields were an average of 750 kg/ha for the season after a good rain year. This past season the average maize grain was 7,8 t/ha with a water use efficiency of 19,5 kg/mm of effective rain received. Something is happening, but what? Is soil organic matter perhaps the big game changer here?

Maize leave samples were taken on 23 February this year to determine the nutrient content (Photo 1). Phosphorus and potassium levels for the different treatments were all above the required values given by the maize information guide. In terms of nitrogen, the treatments of rye, black oats and vetch were slightly below the required level.

The aim is to build-up soil health (or soil organic matter) to a level where microorganisms freely release enough nutrients for a harvest and where water use efficiency is above 20 kg grain/mm of rain.

Soil organic matter
Through the process of photosynthesis, plants obtain their carbon from the air (as CO2) and not from the soil. This carbon is then released from living plant roots as exudates or ‘liquid carbon’, which supports (feeds) the microbial activity required to improve soil structure, increase macro and micronutrient availabilities and enhance soil water-holding capacity. 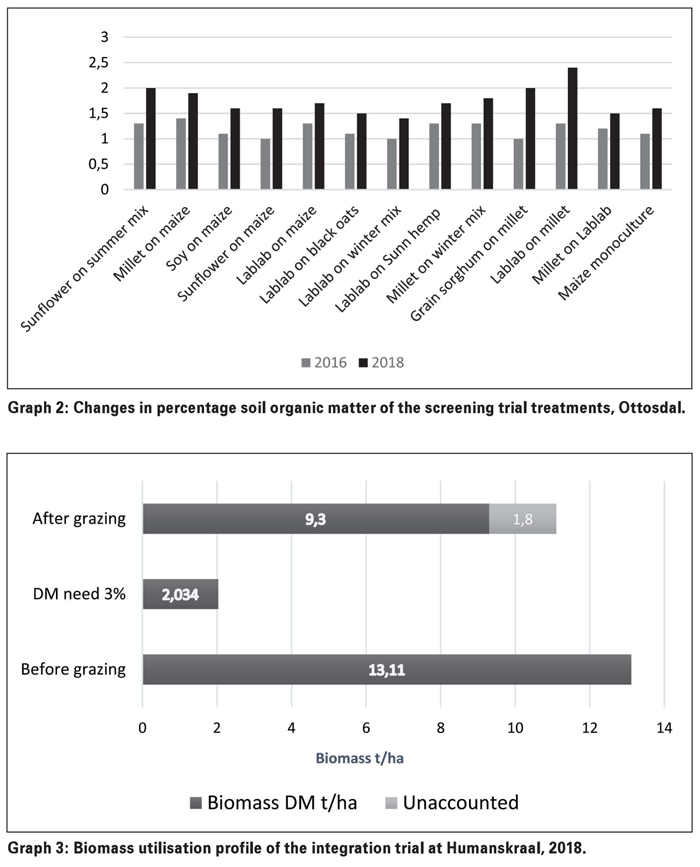 One of the objectives of the trial at Ottosdal was to investigate which crops and crop sequences will positively influence the sequestration of soil carbon, since soil organic matter building in the soils of the sub-tropical, semi-arid environment of North West Province is a major challenge.

Soil samples for selected treatments were annually analysed using the Haney soil health test, which includes soil organic matter and a range of other parameters (see Graph 2). These treatments represent all the different functional groups in the trial, which are grasses, legumes, cash crops and brassicas.

Discussion
Maintenance of the soil organic carbon pool at above the threshold/critical level of 1,1% to 1,5% (1,89% - 2,58% soil organic matter) in the root zone is essential to provide soil functions and services (Lal, 2016).

At Humanskraal the highest value measured for soil organic matter (2,4%) was under a lablab (dolichos) and millet (babala) rotation. The soil organic matter level almost doubled (an increase from 1,3% - 2,4%) over the past two years, reaching the critical threshold level, which is remarkable in this environment.

Plant material with a C:N ratio of 24 or higher, such as babala, will often immobilise soil N, i.e. bacteria will use available N to break the fibrous material down. Legumes fix atmospheric N in symbioses with rhizobial bacteria, which eliminates immobilisation.
Treatments that include high yielding annual grass crops such as babala and sorghum also speed up soil organic matter build up. It is clear that the summer mixture that includes both legumes and grasses can support soil organic matter sequestration by supplying N as well as C.

For the cash crops the value of the sunflower on summer mixtures (2%) holds promise, as sunflower leaves low levels of residues (<30% cover) before planting the next crop. All treatments showed higher values for soil organic matter over the two-year period.

Integration trial
A Phospho Lipid Fatty Acid (PLFA) analysis was also done to look at microbial diversity and function under these selected treatments. The results revealed that after employing CA principles for six years, soils under cash crop soils still have a low soil organic matter (1% - 1,2%) content and poor total microbial biomass. Also, no predators such as protozoa and nematodes are present in the soil. What could be the cause of this undesirable situation?

According to Kristine Nichols, a soil ecologist from the USA, grain crops do not produce that much photosynthetic exudates, also called liquid carbon, to feed soil microbes. When grain crops become reproductive, root exudates shut off as the plant shunts resources into seed production. So there is only a four to five-week period when plants push exudates into the soil. This is not sufficient and therefore grain production doesn’t contribute much to the build-up of soil carbon.

Past practices of agrochemical use and high rates of inorganic fertiliser could also have negatively impacted on soil microorganisms’ diversity and function. Could we rectify these challenges by planting a diverse summer mixture and utilising it with livestock?

The theory
By using high density, low frequency grazing to utilise the summer mixture we are trying to restore our soil carbon stock in the soil. The above ground chewing, tearing and trampling actions by grazers create wounds that the plants must heal.

But the plants can’t do this alone. They need micronutrients and microbial metabolites and this co-operation is achieved by pumping a steady supply of carbon rich exudates from their roots to recruit microbial assistants providing the roots with nutrients.

By letting livestock graze half of the crop biomass available, the diverse sward will regrow. Livestock manure also contains more humic substances than plant residues. Dung beetles and saprophytic fungi can feed on this nutrient rich matter and help recycle elements back into the soil. This carbon will eventually become part of the more resistant, stable carbon pool, also called humus or ‘the very dead’ soil organic matter.

By planting fodder crops, nutrients deep in the soil are returned (recycled) to the surface and placed back into biological circulation. The mulch left on the surface will upon decaying release plant accessible nutrients back to the soil to be used by subsequent crops. By not using excessive amounts of agrochemicals, soil can recuperate with microorganisms breaking down unwanted chemical substances.

The practice
At Humanskraal a field trial of 53 ha of a diverse summer cover crop mixture was planted, which included grasses, legumes, cash crops and radish. Two planters were used to plant the big and fine seed separately on the same field. The planting densities for both big and fine seeds were 110 000 seeds/ha. The aim was a total of 220 000 plants/ha.

The fine seeds were planted at a 30˚ angle on top of the big seed rows. The direct drilling of seed in rows brought a saving on seed cost of 50%, compared to broadcasting. Photo 2 is testimony of the successful establishment of the cover crop. Planting took place on 16 January this year, whereas the photo was taken on 1 February.

Grazing
Livestock was bought at an auction at Vryburg and transported by truck to the farm Humanskraal of Mr George Steyn (Photo 3). Due to the high prices of weaners at the time, cow/calf pairs were bought, 200 in total, which equates to 150 livestock units (LSU), with an estimated dry matter need of 2 034 kg/day.

Electric fencing equipment was used to divide the field in grazing camps of 3 ha each. These camps were used for a period of three days before moving livestock to a new camp. An inclusion area was also identified where animals could be put in case of extended rainy events. A perennial warm season grass pasture of Smuts finger close to the cover crop was identified as suitable for this purpose. Water was supplied at a central point with a corridor on the side of the field trial giving livestock access to the water.

Discussion
The most nutritional leaves and seed heads were consumed by animals. Most of the more fibrous stems were trampled. This created a mulching effect that cover the soil surface completely as shown in Photo 3. Meat production was in the order of 215 kg/ha with a feed conversion ratio of 10.7:1. A total of 11,4 tons of meat was produced on 53 ha in 60 days. Graph 3 gives us a breakdown of the biomass that was produced by the cover crop.

Selling at an auction meant that a 7% commission fee had to be paid to the auctioneer at the cost of R120 000. Transporting the livestock also had high cost implications. According to Steyn, buying livestock at an auction is risky and you might just end up buying another producer’s problem animals.

Using your own animals will be less risky and will add value to your own livestock, which made more sense to him. The field trial will become a monitoring site for future reference.

Conclusion
Restoring soil organic matter back to natural levels before tillage started, will not be easy. However, diversifying crops and livestock has certainly shown to speed-up the biological and recovery process.

Producers are urged to start their own strip trials, comparing and repeating CA practices discussed in this article over a number of years. Producers should be innovative, not relying on recipes, adapting each farm within its own realities. There is no ‘one size fits all’.

All CA principles should be implemented with good quality (minimal soil disturbance, diversity, mulch, livestock integration, living roots), which will help to revive soil life and to feed and protect them.