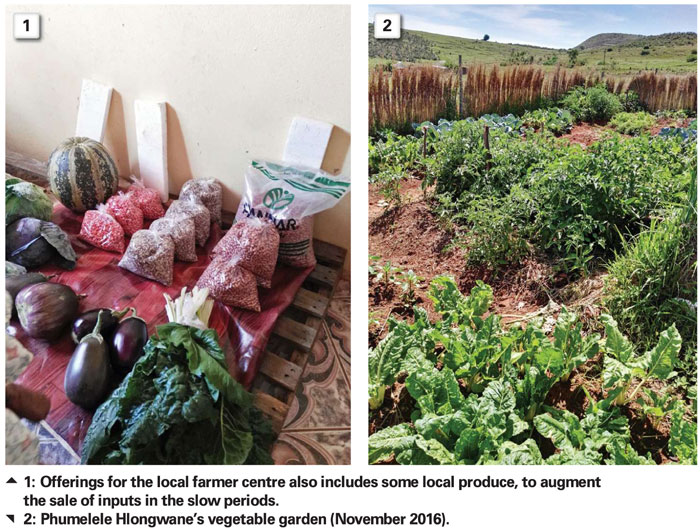 Mrs Phumelele Thembisile Hlongwane’s story is a good example of a local smallholder who has been empowered and encouraged to improve her farming system in order to feed her family and make an income for herself, but also play a mentoring role for other women in her village.

Hlongwane is a 38-year-old woman and a mother of six from Ezibomvini village near Emmaus, Bergville area. She says her passion stems from agriculture’s ability to enable her to be self-reliant, and in her case the key is diversification of her farming system. 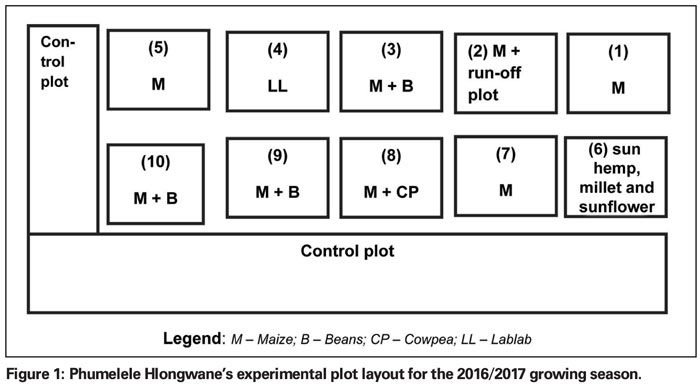 She has a vegetable garden in her homestead planted to a wide variety of crops including brassicas, cabbage, spinach, tomatoes, potatoes and green peppers. She owns the following livestock: Three cattle, six goats, two pigs and a flock of indigenous chickens. She also grows field crops such as potatoes, sweet potatoes, maize, dry beans and soybeans.

‘Maka Ndoza’, as she is affectionately known, joined the Grain SA CA project in 2014 and is now the community facilitator of her Ezibomvini learning group. She is a member of the village savings and loan association, along with other members of her learning group. Here they save and take small loans for inputs and other livelihood necessities. She is also one of the pioneers of the programme’s local farmer centre model, which she runs jointly with her sister-in-law, Mrs Zodwa Zikode, who is also a member of the learning group.

Hlongwane mentioned that the primary aim of the farmer centre is to provide production inputs to farmers in quantities and at prices they can afford. The farmer centre provides seed, fertiliser and chemicals and has significantly increased the agricultural activity in her community as farmers are gaining access to small quantities of inputs, such as 1 kg and even up to entire bags of seed or fertiliser.

‘Many people in the village have stopped planting because they cannot afford inputs,’ said Hlongwane, stressing the importance of the farmer centre.

The income derived from the farmer centre is not large and is also quite seasonal. To date they have made a profit of around R300 to R600 per month from sales, most of which has been re-invested in buying stock.

While her vegetable garden yielded some income for her, this has been periodic because she only sells surplus, leaving her with social grants as predominant source of income. Field crops are also primarily produced for household consumption.

Hlongwane’s CA trials were continued for the fourth season. The layout of her plots for the 2016/2017 season is shown in Figure 1. She is practicing crop rotation as well as intercropping and planting of cover crop mixes: Both summer (sunflower, millet, sun hemp) (SCC) and winter (saia oats, fodder rye and fodder radish) cover crops (WCC) are planted.

Crop yield results
In the 2015/2016 season, Hlongwane outperformed almost all the other smallholders and managed to get rather impressive yields at a time when most other farmers’ crops failed. She experimented with a number of different crop combinations in her CA plots. Her maize control was also a CA plot, where she used her own fertiliser and seed options.

Hlongwane followed with a rotation schedule of the same experiments in the 2016/2107 season.

Table 2 indicates yield averages over the last two seasons. It shows Hlongwane’s very impressive yield levels, with yields on a par with or somewhat better than commercial yields in the area. 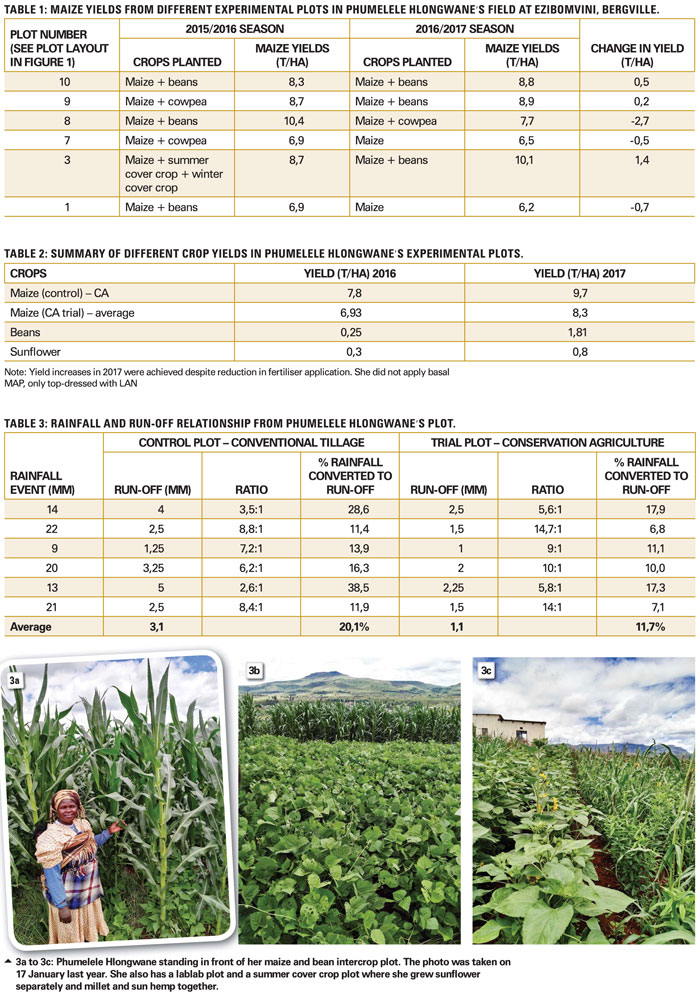 Run-off plot results
Two small run-off plots were set up for Hlongwane: One in her CA trial plot and one in the conventional maize control plot. Measurements were taken by her to compare the effect of the different treatments. Run-off data was collected for those rainfall events where run-off could be correlated to rainfall dates.

In general, there was more run-off in the conventional tillage plot compared to the CA trial plot. The run-off average for the control plot was 3,1 mm per rainfall event and that for the CA plot averaged 1,1 mm. Results are shown in Table 3.

The percentage of rainfall converted to run-off, ranges between 11,36% and 38,46% under conventional tillage and between 6,82% and 17,86% in the CA plot. The average percentage of rainfall converted to run-off is almost double on the conventional tillage plot at 20,1%, while that for the CA plot was 11,7%. This shows that CA significantly reduces run-off over a short period (two to three years) even without the ideal increase in soil cover usually associated with CA systems. 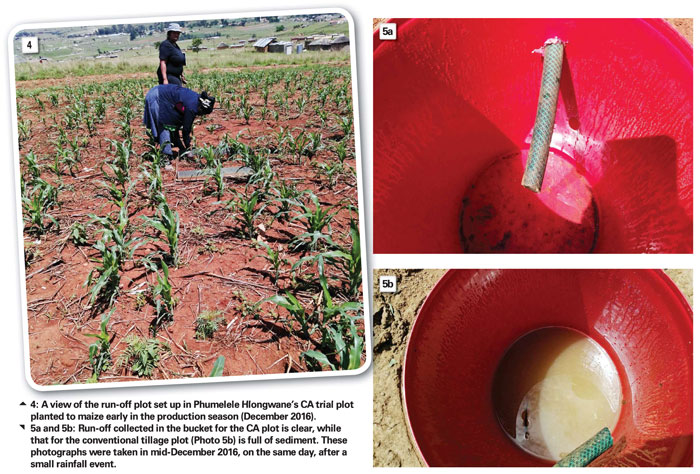 The results also show that the run-off collected from the CA plots had much less sediment lost from soil erosion than from the conventional tillage control plot (see Photo 5a and Photo 5b).

She says that ‘Poverty should never be an excuse if you are able to work. However little you may have can go a long way if one is willing to learn and work with others’. Her greatest wish is for her children to learn that they can make a living from farming.