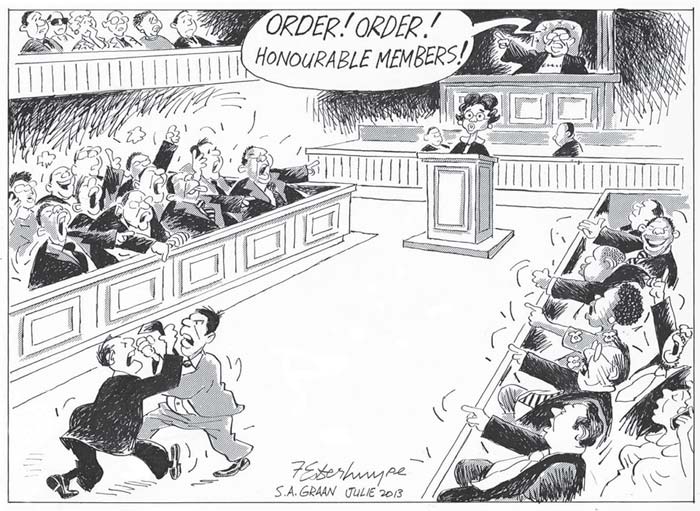 At the end of May 2013 I once again attended parliament to hear the Minister of Agriculture, Forestry and Fisheries’ budget speech. The other reason was that Grain SA was allowed the opportunity to have a grand exhibition of our development work in grain production during the occasion.

It was a pleasure to take all the important visitors there to present them with the results of the programme. More still, we could also take a few of the developing grain farmers participating in the Recapitalisation Programme along so that politicians and officials could meet them personally.

It was particularly focused on people who did not have the opportunity to attend events such as NAMPO, Congress and the Grain Producer of the Year function. It was in many ways a case of “taking the mountain to Mohammed”.

I would like to pass a few comments on the debate itself, but first the serious part that dealt with the content: What stood out was the fact that the minister was driving the issue about food security! That is one of Grain SA’s strategic goals.

Although our country has an excellent record of enough food for all, the reality remains that at least 12 million people go to bed hungry, an issue we dare not cease working on. The focus, however, was not only about assisting those poor communities to get enough wholesome food, but also on the agricultural producer who must produce that food.

The debate was better attended than any of the previous at which I was present. The minister directly addressed the Minister of Mineral Resources about the mining activities that forever alienated agricultural land from production. She also called on the Minister of Transport who was present, to once again get the transportation of agricultural products and inputs back on our railways rather than on the country’s roads. Her participation in and sitting on the president’s Infrastructure Committee is an opportunity that can result in a number of dividends for agriculture if correctly utilised.

There was also more than one reference to the drive to get more markets for our agricultural products. The matter of unity in agriculture was also referred to as well as the funds that have been budgeted for the repair of agricultural colleges. These are all issues and very important goals that Grain SA has on its agenda too. I can therefore gladly report that the issues in her speech are those that Grain SA is promoting on a very wide front and we would now like to see actions for the implementation of these matters.

The debate also reminded me of the house meetings of my hostel during my university days. Those were long hours of a lot of talking that did not necessarily change the world, but the witticisms, remarks and interjections were in a way some of the best lectures on humour I’ve ever attended. Scathing!

One member who had to leave the chamber because of bad language and his refusal to withdraw the remark, invited the “boys” to join him outside in the corridor so that the matter may be settled there! It almost sounded like primary school: “We’ll get each other during break behind the pavilion!”

The addition of Fisheries to the minister’s portfolio also added an element of people and cultures that have not been part of agriculture previously. At some stage I was not quite sure whether one of the women was calling her husband and sons, who are out fishing on the other side of Paternoster, to supper or whether she was just shouting at the opposition. With such a voice she should be quite capable of finalising the SA/EU agreement without having to incur any travelling expenses!

If the ardour, with which the political parties set about one another, in what most of the members considered to be their last budget debate of their term of office, could just be channelled towards the implementation of the budget, we would all be winners!

There was no lack of energy and constraint. I must confess I really missed Uncle Salam Abram in the audience. It was only later that evening that I bumped into him and heard that he had to attend the budget debate for Correctional Services. It is heart wrenching that he as a producer cannot attend the agriculture debate. Almost as if he is in jail.