Brown rust of sunflower: A scarce, but potentially damaging disease

Brown rust is caused by the fungus Puccinia helianthi Schw. – which is capable of causing yield losses in specific sunflower production areas of South Africa where the disease may reach epidemic proportions.

Severe infection with sunflower rust causes a decrease in seed size, head size, oil content and yield. Rust can occur anytime during the growing season as long as the environmental conditions are favourable for it. Annual sunflower disease surveys conducted by the ARC-Grain Crops Institute (ARC-GCI) during the 2012/2013 and 2013/2014 seasons, reported brown rust to occur in some parts of the Free State (Arlington and Bloemfontein) and North West Province (Welgelegen) in isolated areas.

Epidemiology of the disease

Rust overwinters as teliospores on plant debris and do not require an alternate host to complete its life cycle. These teliospores germinate in spring to produce basidiospores which infect volunteer sunflower seedlings.

This initial infection results in the formation of pycnia which in turn leads to the development of aecial pustules. The aecia produce aeciospores which spread by wind to other sunflower plants and will eventually produce uredinia. Uredinia will then produce urediniospores which are disseminated by wind and can infect stems, bracts, petioles and leaves of sunflower plants.

Conditions favourable for rust are warm temperatures and either rain/irrigation or dew. In dry years, if night temperatures are low enough to promote dew formation on leaves, infection may occur. High nitrogen fertilisation and seeding rates result in excessive foliage, which increases humidity within the canopy and this favours rust development.

Adequate rainfall or heavy irrigation associated with warm temperatures promotes rust development. Rust is characterised by cinnamon-coloured spots or uredial pustules, which primarily occur on the leaves, but also on the stems, petioles, bracts and back of the sunflower head.

The uredial pustules on the underside of the leaf turn black with the advent of cool temperatures as the brown urediospores are replaced by black overwintering teliospores (Photo 1). The upper side of the leaf show aecial pustules alone or in clusters (Photo 2). 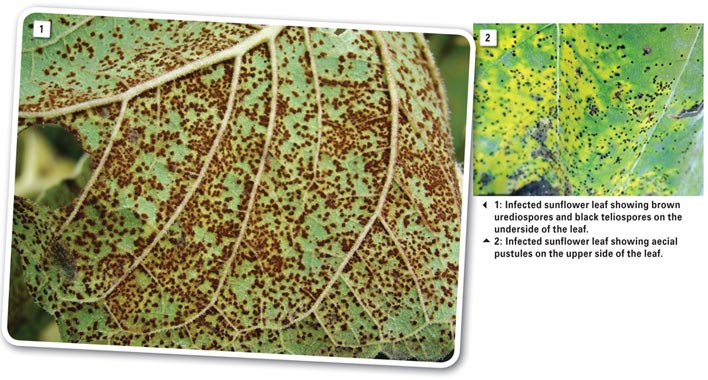 Timely and proper application of registered fungicides (Triazole and Strobilurin) will limit new infections and prevent epidemics. Producers are always advised to seek expert advice before applying fungicides and they should keep to the recommended label rate and time of application.

Producers that observe brown rust symptoms in their sunflower fields are requested to contact the authors at 018 299 6100 as we are always on the lookout for isolates to collect.