Breeding for yield: What is the situation in the Western Cape?

Wheat is considered one of the primary staple foods in South Africa with an annual consumption of 3,2 million tons. Nonetheless, with an estimated 1,87 million tons being produced locally, South Africa has to import large quantities of wheat at a cost of approximately R6,5 billion.

This is in strong contrast with the 2,4 million tons of wheat produced in 1982 on 1 million hectares. The reason for the decline in wheat production may be attributed to producers switching to more profitable crops in the current economic and environmental climate.

Secondly the adoption of conservation farming practices place wheat production in direct competition with other cash crops such as barley, canola, lupine and oats. Most of the role-players in the wheat industry agree that drastic action is required to “save” the wheat industry and that the goal is to make South Africa at least 85% self-sufficient regarding wheat production.

This may however be an optimistic goal and there are a number of factors that need to be considered before local wheat production will increase.

What are the limiting factors for increased wheat production?

For a producer to farm productively, the pricing of a product is of utmost importance. Producers are not compensated well enough for the superior quality wheat crop produced annually, which is evident in the increased demand for wheat and the decline in local wheat production. The problem with pricing is that local wheat producers cannot compete with the price and quality of imported wheat.

Wheat produced in South Africa is among the best bread making quality crops in the world and is, therefore, popular in the local milling and baking industry. However, despite the high quality of locally produced wheat, producers are not compensated accordingly and they are consequently demanding that the quality standards of future wheat cultivars are lowered to be able to compete with the global wheat industry.

Since yield and quality are negatively correlated, the relaxing of the bread making quality norms will enhance the release of new wheat cultivars with higher yields that will favour the producer.

The milling and baking industry is a highly sophisticated industry that involves complex processes and characteristics which require wheat with a good extraction and flour yield. However, the production of high quality wheat is not economically sustainable for the producer and unless something is done to rectify the situation, local wheat production will continue to decline.

Wheat yield is a polygenic characteristic, which means that yield is controlled by hundreds of genes located on the 42 chromosomes of wheat. The biggest problem is that these genes are not mapped and that molecular markers, linked to these genes, are not regularly available.

A question frequently asked is: How much do genetics contribute to the improvement of wheat and what is the rate of yield improvement? Pakendorf and Booyse (2012, personal communication) showed a 0,75% genetic gain per year in wheat yields for the past 52 years in South Africa, which compares favourably with the inter national trend of 0,5% - 1,5% genetic gain per year in wheat yield.

However, it is suggested that a genetic gain of 10% - 15% is possible for wheat cultivars that do not comply with current quality standards when cultivated under dryland conditions in the Western Cape.

In order to keep up with the increasing demand for wheat and to make it economically viable for producers to produce wheat, the primary aim of the ARC-Small Grain Institute (ARC-SGI) Wheat Breeding Programme is to develop and release new and improved high yielding cultivars that are well-adapted to conditions in the Western Cape.

With that goal in mind, the ARC-SGI released Ratel in 2011. Ratel is a mid-season cultivar that is well-adapted to conditions in the Rûens and Swartland. Yield data obtained from the national small grain cultivar evaluation programme in the winter rainfall region showed that Ratel had the third best yield over a four year period (2011- 2014) in the Rûens.

In addition to Ratel, the ARC-SGI already obtained preliminary classification for the line (W12/12) and are very optimistic to obtain final classification approval early in 2016. The ARCSGI will immediately commence to commercialise this cultivar with the name Steenboks.

Steenboks is a short season cultivar that was developed specifically for the Swartland region. Preliminary yield trials done in the Swartland showed that Steenboks performed extremely well in the Piketberg and Philadelphia areas. 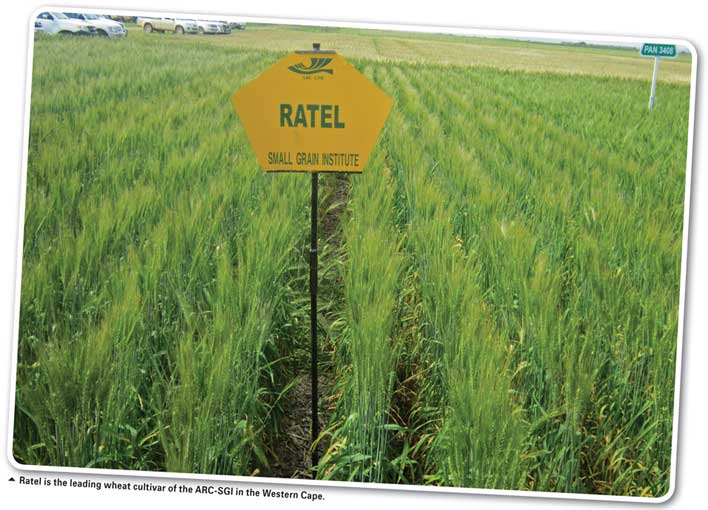 What is the future of wheat in the Western Cape?

It is therefore important to look at solutions that will make wheat production more profitable in this region. One of the solutions is to release higher yielding wheat cultivars.

This research was made possible with the financial assistance of the ARC and the Winter Cereal Trust.