The sugar cane industry makes a significant contribution to the South African economy. This is attributed to its agricultural and industrial investments, foreign exchange earnings, high employment and its linkages with major suppliers, support industries and customers. However, for the past decade the South African sugar cane industry has been grappling to come to terms with much tighter profit margins, mainly due to stagnant and in some areas even declining yields, combined with rising input costs.

In the coastal regions, the prevalence of Eldana (the African sugar cane borer) has forced growers to shorten their cutting cycles, impacting negatively on yields as well as the quality of cane delivered (BFAP, 2015).

In recent years yields have also been affected by exceptionally low rainfall conditions. Particularly during 2014 and 2015, the rainfall levels have dropped well below long-term average levels. Hence, the year 2015 will be remembered as the worst year of drought in 103 years.

There are 14 sugar mills operating in South Africa and they are owned by six companies. The mills operate for approximately 36 weeks of the year between April and December. The recent drought comes at a time where a number of mills have already been struggling with lower throughput and consequently lower profit margins for the past several years. Currently the energy supply is unreliable and energy costs have been increasing in South Africa. This adds pressure to an already troubled sugar cane industry.

Pressures on the industry have forced sugar cane industry participants to find ways to offset high operational costs. The industry has already invested in the renewable energy sector by producing energy from bagasse. Meanwhile, there are other kinds of by-products, such as filter cake and wastewater, which have been largely unused from an energy point of view.

It is estimated that the sugar cane industry generates 0,2 m3/ton - 1,8 m3/ton of wastewater with a high biological demand. Sugar wastewater, if disposed of in water bodies and left untreated, can contaminate surface and subsurface waters.

Current mainstream technologies for wastewater treatment, such as aerobic activated sludge and tertiary nutrient removal pro cesses have a limitation of not recovering valuable energy contained in the wastewater.

Calculation of the amount of biogas produced

Methodology
The theoretical amount of biogas presented by this desktop study is merely a guideline. It should be noted that the actual amount of biogas that can be realised will differ from that which are calculated. This is due to factors such as biogas digester efficiency, fluctuations in production levels and assumptions made during calculations.

Lastly, literature gave varying values of waste generation rates, chemical oxygen demand and biogas yields for the same waste residue. Hence in most cases the values used for calculations was at the discretion of the authors and conservative values were favoured.

Data regarding the amount of sugar cane crushed annually by each of the 14 mills was obtained from the South African Sugar Association (SASA) website.

The assumptions above were the basis for calculating the biogas production potential.

Biogas produced from the solid and liquid wastes

The main solid waste residues arising from sugar processing is bagasse and sugar filter mud/pressed cake. Bagasse residues were excluded from the calculations as they are already used as an energy source at mills. The amount of filter mud generated was calculated as a percentage of the total sugar cane crushed which is 5% (GIZ, 2014a), therefore filter mud generated for the 2014/2015 period amounted to 0,89 million tons.

Biogas yield for filter mud ranges between 20 m3 - 80 m3/ton. A conservative value of 25 m3/ton was used (GIZ, 2014b), giving a potential annual biogas production of 22,19 million m3. The amount of biogas that could potentially be produced from the solid waste (filter mud) generated from the 14 mills is shown in Table 1.

A COD value of 2 kg/m3, 80% COD removal efficiency and a biogas yield of 500 m3/ton of COD (Biogas Forum, 1999) were used for calculating the biogas production potential. This gave a potential of 2,56 million m3 of biogas that could be produced from the sugar cane wastewater generated in the 2014/2015 production cycle. The solid and liquid waste generated form the main sugar mills in South Africa for the 2014/2015 season has a total biogas production potential of 24,75 million m3. Taking the calorific value of biogas to be 6 kWh/m3, the potential energy that could be recoverd from 24,75 million m3 of biogas is 148,50 GWh.

The analysis in this article points to the fact that there is considerable potential for the South African sugar cane industry to further produce renewable energy from currently untapped solid and liquid waste by-products. This is waste material that could have otherwise polluted the environment. 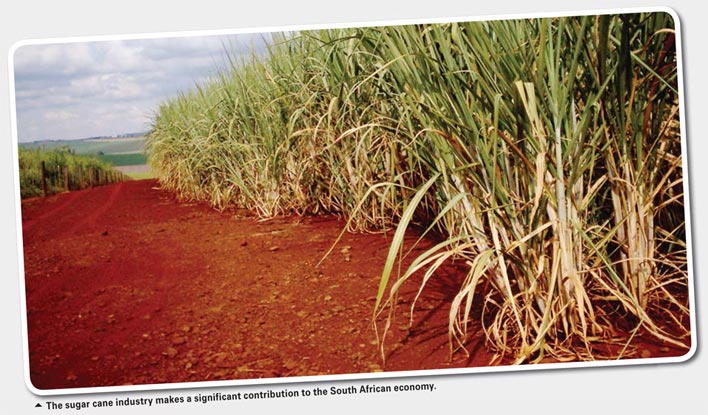