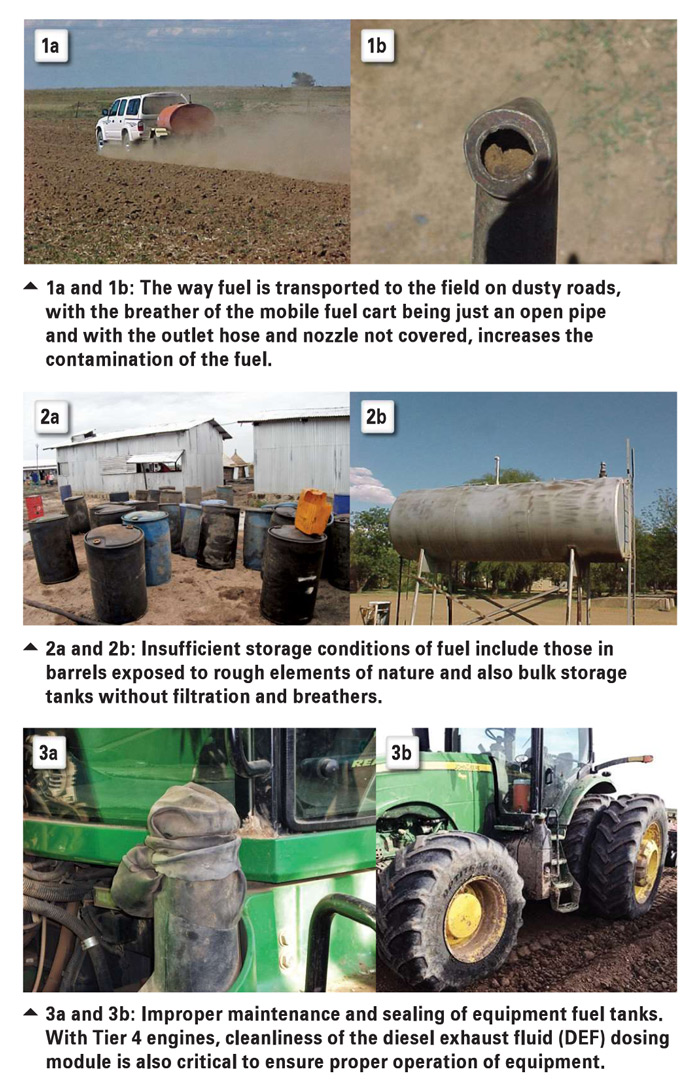 With the increased demand for engines to comply with global emissions regulations and the adoption of newer technologies in the manufacturing of modern engines, it is becoming more important for owners of engine operated equipment to be warier of the fuel they put into their equipment.

On some of these engines, combustion related problems are becoming more common, with the cause being mostly poor fuel quality and contamination. Symptoms like reduced engine output, ignition difficulties, increased fuel consumption, irregular exhaust gas temperatures and colour, turbo and injector failures as well as shortened engine life are more prominent. These engines also normally operate on low sulphur fuel (≤50 ppm) or ultra-low sulphur fuel (≤15 ppm). It is therefore important to supply the engines with a good quality and clean fuel for optimum performance.

Although the diesel from the refineries and petroleum companies in South Africa complies with the most recent South African National Standards, improper handling, transportation or storage of these fuels can lead to deficient quality of the fuel. Some common contributors to poorer quality fuel include:

The latter two causes can result in rust, dirt, moist air, water, algae or sludge accumulating in bulk tanks as well as mobile fuel carts. These contaminants together with poor lubricity characteristics are amongst the most common contributors observed in fuel related engine and component failures over a prolonged period of time.

With good housekeeping procedures, most of these problems can be minimised to ensure optimum performance and engine life. It is very important to purchase fuel from a well-known and authorised fuel supplier. If fuel of a poor quality is used, it can also lead to combustion related failures.

Fuel with poor lubricity will damage fuel injection components and the injection needles can become sticky or worn. If fuel was treated with unapproved liquids it can also cause deposits to form on the injection components that can result in sticky injector needles. Worn or sticky injector needles cause fuel delivery and combustion problems, leading to increased exhaust gas temperatures which can result in premature turbo and engine failures. It is therefore important to do background checks and inspect delivery equipment to ensure the supplier has proper quality checks in place with well-maintained equipment.

Customers can also request certification documents from their fuel supplier to ensure it meets the minimum standards. The most recent published standards documentation (SANS 342:2016) can be procured from the SABS web store. In summary, the question a customer may ask is ‘Who will take accountability if I have fuel related failure on my equipment?’

Contamination
Contamination from solids or foreign liquids can be minimised by installing breather filters with air driers on bulk tanks as well as mobile fuel carts. This will prevent dust and moisture from entering these tanks when fuel is drawn from tanks. Particle contamination filters combined with dedicated water separators can be fitted on the outlet of bulk tanks and mobile fuel carts to deliver clean water free fuel from these tanks. It is important that filter and breather elements are replaced regularly and that water separators are maintained and drained when necessary.

The proper cleaning and draining of sludge and water from the bulk tanks and mobile fuel carts are also important maintenance tasks to ensure the cleanliness of fuel. Regularly check sludge levels and rust in bulk tanks and mobile fuel carts and maintain accordingly. It is recommended that the bulk fuel tank is installed at a slight angle, with the drain plug at the lower point and the layout to the pump at a higher point to keep debris and sludge in the bottom of the bulk tank.

Ensure that the pump nozzle is kept clean and wiped off before fuel is poured into equipment or mobile fuel carts. Regularly check all hoses and connectors for leakages to prevent clutter from forming due to dust accumulation. Fuel storage tanks and facilities should also be properly secured to prevent unauthorised entry and tampering with the equipment, or theft of fuel – which may cause these facilities and tanks to be filled up with foreign liquids.

Equally important is the maintenance on the engine-driven equipment. Some best practices include to ensure equipment and fuel tanks are filled up when they are stored to reduce the risk of condensation and water forming inside the tank. Never let new modern engines run out of fuel or allow the fuel level to become too low. 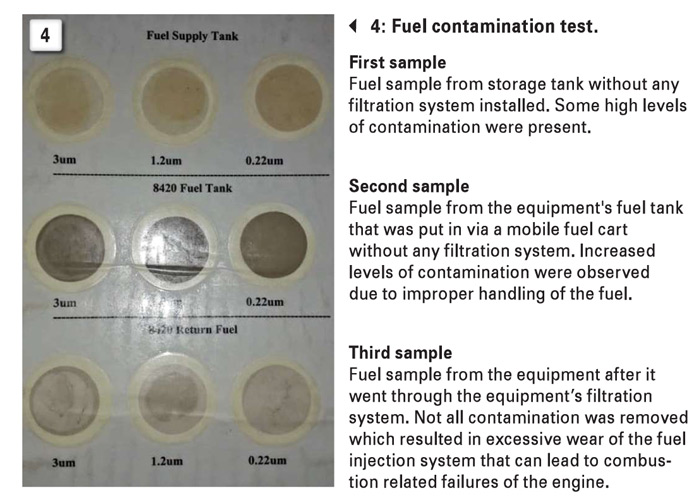 The return fuel line from the new modern engine is hot and flows directly back into the fuel tank. This can cause the temperature of fuel to rise and damage the injector needles. Keep dust caps clean from dust and debris and ensure it is properly sealed and closed off to prevent dust particles from entering the system.

Also ensure fuel filters are replaced in accordance with the operator’s manuals and fuel standards, and drain water separators regularly. Trying to avoid operation of equipment at Peak RPM for prolonged periods of time can result in better fuel economy and reduced wear on key powertrain components.

Photo 4 is the result of a simplified test of fuel contamination on a farm by means of which fuel is filtered through various different kinds of filter media. It is evident that fuel contamination can increase due to the improper handling of fuel on the farm.

Lubricity
To help with poor lubricity, there are special diesel fuel conditioners that act as multi-functional fuel additive products for year-round use to improve diesel fuel quality and maintain peak engine efficiency and performance. Some of the features of the additive include:

Customers should consider doing regular fuel tests from bulk and mobile fuel storage tanks as well as their engine-driven equipment. Fuel samples should be taken in glass bottles or tin cans and should be taken at the right levels.