Bearish for too long: A brief review of domestic and global wheat market fundamentals

Nonetheless, production turned out lower than expected as a result of an on going drought in some areas of the Western Cape Province such as the Swartland, led to lower yields. At the moment the weather conditions still indicate a dry outlook but indications from a number of weather forecasters are that South Africa might get some rainfall this season, as the El Niño event transits into La Niña.

The market conditions are also slightly favourable with the wheat import tariff having increased to an all-time high of R1 224,31/ton. In this article, we will briefly explore the current domestic and global wheat market conditions. 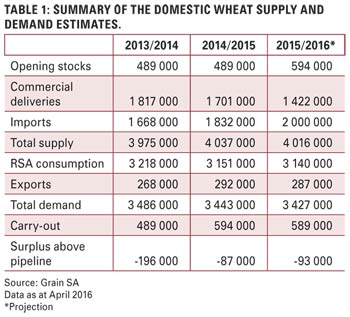 The 2015/2016 South African wheat production was 1,46 million tons, which is 17% lower than the previous season’s crop and the lowest since the 2010/2011 season. Using this production figure, Grain SA estimates that South Africa’s 2015/2016 wheat imports could reach 2 million tons.

According to Grain SA’s database, which dates as far back as the 1990/1991 season, this would be the highest import volume on record and resonates with the increase in South Africa’s wheat consumption, which is now roughly above 3 million tons (Table 1). At the same time, South Africa continues to export wheat to regional markets. The 2015/2016 wheat exports are forecasted at 287 000 tons, which is 5 000 tons lower than the 2014/2015 exports.

It is important to highlight that South Africa is a net importer of wheat, and as a result, domestic wheat price movements are largely influenced by the exchange rate as well as the international wheat market events. At the time of writing, international wheat prices (HRW no. 2) traded around US4/ton, which is the lowest level in six years.

South Africa’s wheat imports have been steadily increasing over time. The increase in imports comes on the back of decreasing domestic production as well as a steady increase in consumption. The leading suppliers of wheat to South Africa are Black Sea, European and North American countries. 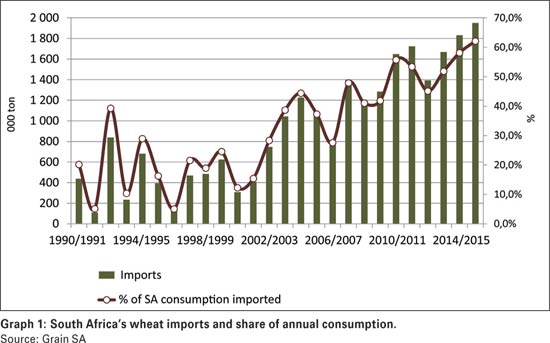 The 2015/2016 global wheat production is estimated at 732 million tons, up by 1% from the previous season. This increase is mainly due to large production in the European Union (EU), Australia, Canada, Kazakhstan, Russia, Ukraine, US and Argentina (Graph 2). In the same season, global ending-stocks are forecasted at 214 million tons, which is 6% higher than the previous season. 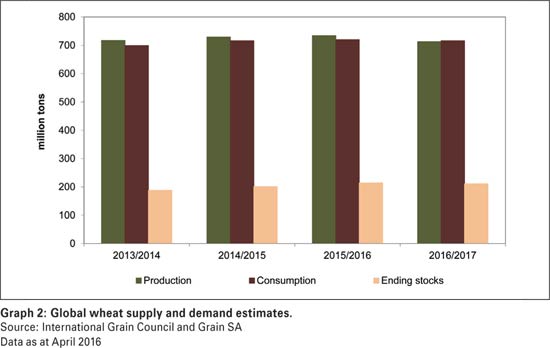 In the 2016/2017 season, global wheat production is being fore - casted 3% lower than the previous season, at 713 million tons. This is on the back of the assumption that yields might be reduced in many parts of the EU, Russia, Ukraine, US, Kazakhstan and China. Unfavourable weather conditions are the underlying cause behind low crop production across these aforementioned countries.

Moreover, the 2016/2017 global wheat consumption is forecasted at 716 million tons, down by 1% from the previous year due to expected 7% year-on-year decline in feed use. The global demand for feed will likely be constrained by competitively-priced alternatives. At the same time, the 2016/2017 global wheat ending-stocks are estimated at 211 million tons, a decrease of 2% year-on-year, due to expected decrease in global production (Graph 2). Nonetheless, this will still be the second largest ending-stocks in the past four seasons.

The global market offers ample wheat supplies and as a result, international wheat prices could remain under pressure for a prolonged period. South Africa, as a net importer of wheat could also remain under pressure, regardless of the production situation in the domestic market.

However, the positive side remains that the existing wheat import tariff – providing a support base for domestic wheat prices – might remain at higher levels (assuming that global wheat prices remain under pressure), thus not allowing for the decline in domestic prices whereby the viability of producing wheat in South Africa would be questioned.