Be on the lookout for leaf diseases on maize

This time of the year the most maize production inputs should have been done in the eastern parts of the country. The herbicide application and top dress can still be done in the central production areas like the free state and north west. It is also important to be on the lookout for maize stem borers.

There are different pests in this category so contact your representative to make sure that the correct chemicals are correctly applied.

To ask for help is not a sign of weakness but of strength. This is also applicable for maize leave diseases. The incorrect application of chemicals will not control the disease, yield losses will occur and the chemicals still need to be paid. Double whip beating.

Grey leaf spot, bacterial streak and sunburn damage are sometimes confused by the untrained eye. Management of these problems is very different, and in some cases not even possible. Pannar Seed’s free smartphone app, Sprout is a good source of information. It summarises and provides a brief description of the most important diseases found on maize in South Africa. This enables the farmer in conjunction with his local agriculturist or chemical representative to manage the relevant disease correctly.

Before they occur, the most important maize leaf diseases have unique needs in terms of environmental conditions. Furthermore, the physiological growth stage of the plant determines when certain diseases appear.

The most important maize leaf diseases for which the farmer should be on the lookout are combined in Table 1. 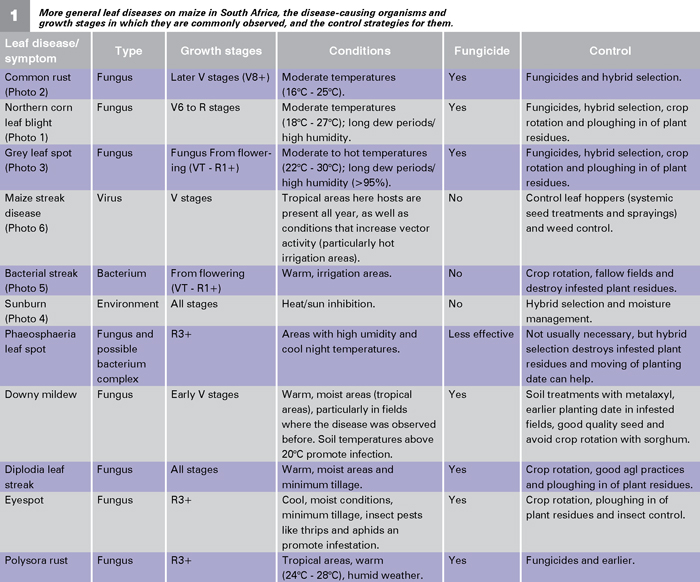 NORTHERN CORN LEAF BLIGHT
The most common leaf disease that occurs in most of the maize-producing areas of South Africa is northern corn leaf blight (white rust) Photo 1. Environmental conditions that promote the disease are moderate temperatures (18°C - 27°C), moist conditions and long dew periods. The fungus survives on maize leaf residues, and multiple secondary infections develop throughout the season from existing lesions.

The lesions are usually noticed on the bottom leaves first, and as spores are released under favourable conditions from these lesions, the upper leaves are infected and it seems like the disease creeps up the plant.

COMMON RUST
Common rust (Photo 2) is usually noticed for the first time during the season on the young maize plants. Environmental conditions that promote the disease are moderate temperatures (16°C - 25°C) and moist conditions (>95% humidity). Common rust infection is promoted by dew/fog conditions – especially during the night when spores on the leaf surface germinate and penetrate the leaf through the stomata.

Early signs of rust infection are visible approximately five days after initial infection as small flecks on the leaves, and proper rust pimples (ten to 14 days) (Photo 2) then develop and release spores. On release these spores can be distributed across great distances by the wind. These spores can even infect the same plant again within the same season.

The disease symptoms become particularly visible around flowering – although they can be visible earlier under high disease pressure conditions. This is a leaf disease that occurs specifically in KwaZulu-Natal and the eastern Highveld, where fog and/or high humidity and high temperatures prevail.

A misperception exists that the spores of the fungus are only airborne and distributed by the wind and the rain. Spores can indeed be spread by the wind, but these are secondary spores that can be spread from one planting to the next later in the season – and usually over shorter distances.

The real source of the disease is plant residues from the previous season in which the fungus survives, and as soon as the conditions become favourable in the new season, spores are released that can affect the lower leaves of plants.

These lesions produce new spores that, as the growing season progresses, are released and distributed by rain droplets and wind to newer leaves higher up on the plant. Grey leaf spot is often confused with sunburn/drought inhibition (Photo 4). Needless to say, the drought damage cannot be controlled and the unnecessary administration of fungicide causes a double setback for the farmer. None of the fungal leaf diseases mentioned is seed-borne.

BACTERIAL LEAF STREAK
Bacterial leaf streak (Photo 5) is a disease that specifically occurs in the western production areas and these symptoms are confused with those of grey leaf spot. A bacterial disease cannot be controlled with fungicides and spraying for it can be an expensive mistake – without any result.

MAIZE STREAK DISEASE
Maize streak disease (Photo 6) is caused by the maize streak virus. It is a complex disease, where the virus is transferred by a leafhopper. The environmental conditions affect the incidence, survival and distribution of the leafhopper – which determines the incidence and intensity of the disease.

Maize streak virus cannot be controlled with fungicide. Controlling maize streak virus involves a combination of measures to reduce or limit the risk of the disease. Although insecticides are effective as seed treatments and prevent the leafhoppers from feeding on the young plants and transferring the virus, they are no guarantee or instant solution for the disease.

CONCLUSION
There are various other leaf diseases that were not mentioned in this article because they are less common or occur sporadically. However, this does not mean that they cannot cause huge yield losses under the right conditions. In order to react timeously, it is wise to still consult a good source or expert if suspicious symptoms are observed.