In this article we look at different scenarios for barely production, given intentions to plant and average yield.

Production is determined by area and yield; however, these two variables are contingent on weather. Considering the uncertainty brought by weather on intentions to plant, this article hypothesises different scenarios using the Crop Estimate’s Committee area planted and average yield over the past three years as the baseline to determine production for 2019.

Table 2 has area planted on the x-axis with the crop intentions in the centre and yield on the y-axis. On the x-axis, we have 5% deviations from the intentions towards the left and the right, indicating that the final production could be 5%, 10% or 15% above or below the CEC intentions. On the y-axis, we have deviations above and below the average yield of 4 t/ha. Working from the centre of the table, if 118 500 hectares is planted and the yield is 4 t/ha, then production will be 474 000 tons.

Going towards the left of the table, if 15% less is planted (100 725 hectares) and the yield remains at 4 t/ha then the production will be 402 900 tons. Working towards the right of the table, if 15% more is planted above the intentions, with the average yield of 4 t/ha, then production will be around 545 100 tons. This exercise can be done for all area planted and yield combinations.

WEATHER IN BARLEY GROWING REGIONS
Looking at the ARC’s monthly standard precipitation index, severe drought over the far south-western parts of the Western Cape is visible on the longer time scales (24 and 36 months) as represented until end of May 2019, with signs of relief for the past twelve to six months. 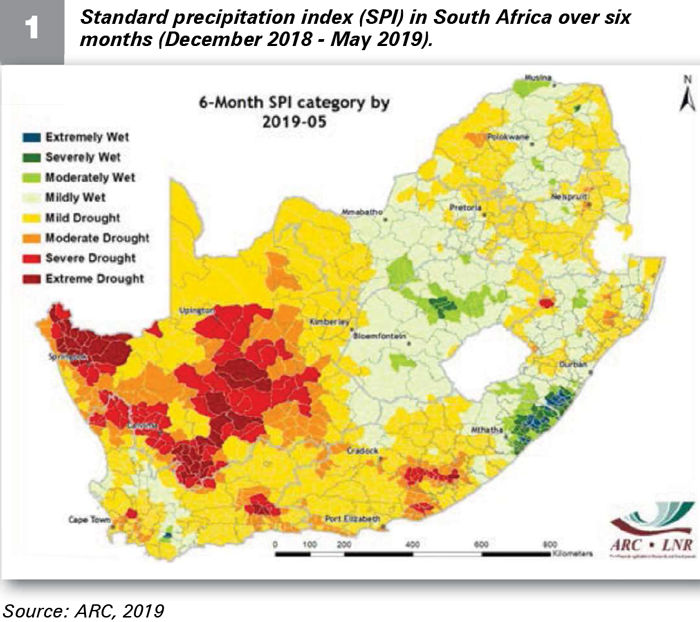 Over the south-western parts of the country, rainfall totals were similar to those of historically drier May months. Similar conditions are expected to prevail throughout the planting months. For crops that are under irrigation, it should be a reasonably good season, as dams across the country are at healthy levels.