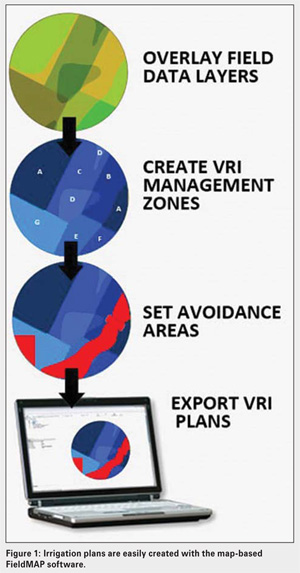 Soil and topography varies in most centre pivot circles with some soil types and areas that will become water locked while others will remain too dry to produce optimally. Due to this, the yield will also fluctuate. These low and high spots and soils create the need to vary water applications.

Variable rate irrigation technology allows you to apply exactly the right amount of water to specific areas under your irrigator – giving full control to maximise yields and profitability. The Growsmart precision variable rate irrigation system achieves this by individually pulsing sprinklers on and off, while also controlling the irrigator speed to modify the application depth along the length of the irrigator.

Control of the irrigator speed and individual valves allows the amount of water applied to each area to be carefully regulated, optimising water application.

There are many agricultural applications where irrigation efficiency can be improved through the use of variable rate irrigation. The technology has proven benefits for farms irrigating over varying soil types or with different crops planted under the one irrigator. Water savings and yield increases are achievable by reducing irrigation to high run-off areas and low areas prone to getting wet and boggy. Irrigation can also be completely avoided over buildings, tracks, roads, water-ways, non-productive and environmentally sensitive areas.

Independent research has indicated that in any one year, variable rate irrigation can save between 9% and 26% of irrigation water. In practise producers in Australasia have been achieving water savings of up to 35% by tailoring irrigation to the water requirements of variable soils underneath an irrigator. These savings are possible through the use of the intelligent precision variable rate irrigation system enabling application rates over wet areas to be reduced and water completely turned off over tracks, drains, buildings and unproductive areas.

Precision variable rate irrigation solves common over-watering issues inherent to many machine set-ups such as laterals, geo-laterals and part circles. For instance, irrigation plans can be set up to ramp down application rates when approaching the reversing point for a part circle or lateral and then ramp up again when heading away from the barricade. The intelligent system can also detect when a geo-lateral changes from lateral to pivot mode, altering the sprinkler rates accordingly to even out the application.

Irrigation plans are created with FieldMAP, precision variable rate irrigation’s custom mapping programme. The software is preloaded with applicable irrigator data, and then it is customised for each system after which it is ready to generate irrigation plans. Water application can be optimised for both the area irrigated and the water source, for instance the maximum consented water volume or flow rate.

Within the map, “management zones” are set from the field information in which different application rates are applied. As the precision variable rate irrigation system allows individual control of every sprinkler along an irrigator, there are no spatial or profile limitations to the management zones. 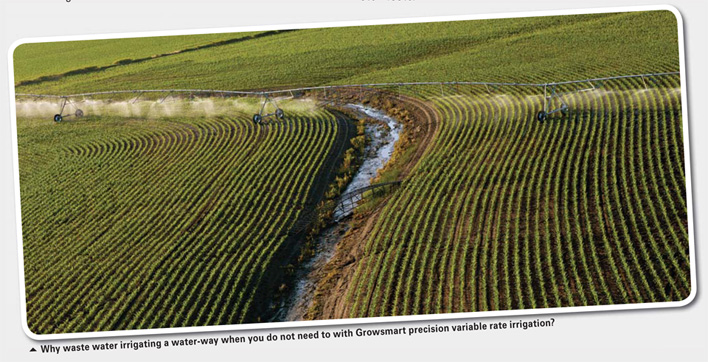 The capital layout of a variable rate irrigation system is influenced by the number of sprinklers on the irrigator, spacing between the outlets and the length of the structure. Cost estimates and return on investment calculations show payback terms of five to ten years. This depends on the severity of the problem, potential of soils with the right irrigation and the value of the crop.