While largely unreported in South Africa, this phenomenon has been reported sporadically in the USA corn-belt since the late 1990s. Arrested ear syndrome is not caused by a pest or disease. It is linked rather to plant stresses at a sensitive stage of ear development causing partial or complete abortion of the ear.

This occurs during the late vegetative growth stages of the maize plant. See Photo 1a to 1d. 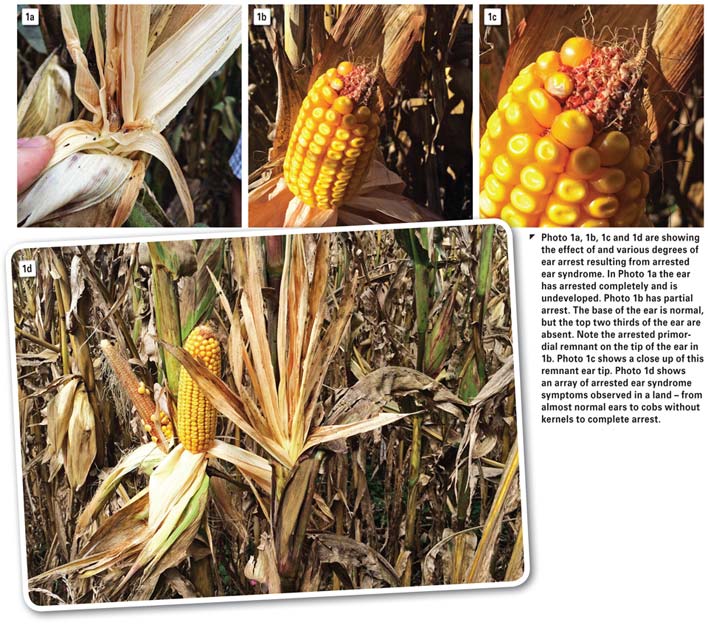 In all other aspects, the maize plant with an arrested ear appears normal. As the season progresses, stems and leaves of plants with severe ear arrest will often colour red or purple due to sugar deposition in these organs. The stunting or absence of the ear has a direct impact on the yield potential of the affected land. In lands with a high percentage of arrested ears, one would expect the yield loss to be in a similar proportion to that of the arrested ear syndrome.

One of the most common theories proposed to explain arrested ear syndrome in the USA is cold stress. In particular when associated with a sudden drop in average temperature. Due to the unpredictability of arrested ear syndrome the exact cause and timing of the stress event that results in ear arrest has been difficult to determine or replicate, despite various studies that have been undertaken.

In 2007 numerous reports of arrested ear syndrome emanated from the Midwestern corn-belt in the USA. Researchers from Purdue University investigating some of these incidences noted that a common thread linked many of the reported cases. In nearly all of these cases of arrested ear syndrome a pre-tassel application of crop protection chemicals, often including adjuvants, had been applied.

In 2008 these researchers designed some demonstration plots to test if these sprays could have increased the incidence of arrested ear syndrome. In their demonstration they included three fungicides sprayed alone and in various combinations with insecticides, adjuvants, spray additives and herbicides. The different treatments were then assessed for arrested ear syndrome and compared to an unsprayed control block.

From Graph 1 it would appear that the more components that are added to the spray mix, the higher the rate of arrested ear syndrome. Fungicides alone or fungicides plus an insecticide were no different to the unsprayed control from an arrested ear perspective. Arrested ear syndrome appears to be linked to the presence of non-ionic surfactants (NIS) and crop oil concentrate (COC), both of which are common ingredients in adjuvants, and also linked to multi-chemical tank mixes. 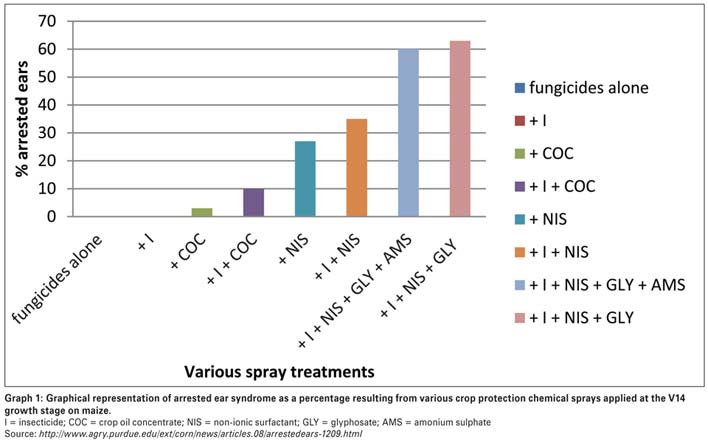 In 2009, agronomists from Beck’s Seed (USA) also successfully performed a demonstration to illustrate this effect of non-ionic surfactant applications increasing the incidence of arrested ear syndrome. In their demonstration, the crop protection spray was also applied at V14. Table 1 shows the difference obtained by Beck’s Seed.

Although the extracts from the two reports mentioned above tend to indicate that applying crop protection sprays at certain plant growth stages can cause arrested ear syndrome, plenty of lands have received this treatment with no report of ill effects.

The current understanding of arrested ear syndrome is not complete, and it is most likely caused by interactions between a myriad of variables and stresses, particularly cold stress, impacting the maize plant. The vast majority of these variables are beyond our control.

With this in mind, the following advice is proposed to help reduce the risk of arrested ear syndrome:

A final thought: Crop protection chemicals, by design, are applied to protect the crop and maintain its yield potential and can therefore be construed as a good thing, however the old adage “You can’t get too much of a good thing,” does not necessarily apply in this instance and moderation is advised.