Rural development in South Africa poses many challenges in the process to establish sound and thriving rural communities. According to the census of 2011 the rural population of South Africa stands on 19,2 million.

In a recent survey of the South African Institute of Race Relations (SAIRR) the share of those living in rural areas dropped from 48% in 1990 to 38% in 2011. The landscape of rural communities has also changed over the past 20 years as many rural inhabitants are abandoning agriculture in favour of various non-agricultural trades offering new sources of income.

However, agriculture remains the backbone of many rural communities. Thus, purposeful agricultural interventions that help producers to improve their productivity resulting in a stronger rural economy, will surely have an impact on rural development.

Since 1996 the ARC-Grain Crops Institute (ARC-GCI) has committed itself to rural development. Many community-based projects have been implemented and producer organisational structures strengthened. The projects are built on the following pillars:

Emphasising the importance of soils – the basis of crop production

Following this, a number of “Know your soil” practical field sessions were conducted. At these events producers were introduced and exposed to learn more about the physical and chemical properties of their own soils (Photo 1).

Protecting and revitalising the soils, a non-renewable resource, rank a high priority at the ARC-GCI. Conservation agriculture (CA), a newly promoted alternative production system, provides an ideal opportunity to, in the long run; replenish the degraded soils of many farming communities towards its original state without an excessive amount of external inputs.

Excessive nutrient mining took place over decades and adequate plant nutrition is often cited as the most limiting factor to crop production. These nutrition imbalances, however, should first be addressed before CA can be practiced and implemented successfully.

Given the smallholder farmers’ precarious financial situation and poor access to credit, this will not be possible without government intervention.

Crop production in many rural farming areas of South Africa is marked by many risks and low crop yields are common. The ARCGCI addresses this problem at two fronts:

Combining water saving production methods and water efficient maize varieties
Since 2009 the ARC-GCI, in collaboration with producer groups in Mpumalanga, Limpopo, the Eastern Cape, Free State and North West Province investigates the value of CA aimed at lowering the risk in dry areas in particular.

In dry regions water loss through runoff and evaporation reduces the level of plant-available water content of the soil, which is a major cause of low grain yields. Implementation of a well-tested and appropriate CA system is regarded as the best way to revitalise crop production in the targeted areas.

Leaving a mulch of crop residue on the soil surface to serve as a protective cover, a basic principle of CA is an effective method for limiting these losses. The Water Efficient Maize for Africa (WEMA) project is another concerted effort by the institute in which a series of drought tolerant varieties have been developed and are currently introduced to various farming communities.

This was achieved by a comprehensive breeding programme funded by the Bill Gates Foundation. In view of the need for food security in our country, stabilising the yields of farming communities will remain a high priority at the ARC-GCI.

Crop rotation and diversification
Maize is the most dominant crop in almost all rural areas of South Africa. According to the publication Trends in the agricultural sector (DAFF, 2012) the area planted to maize by producers in the non-commercial sector is 442 114 ha.

In many cases, these production systems are characterised by mono-cropping rather than more sustainable cultivation approaches such as crop rotation. As legume crops such as groundnuts, soybeans, dry beans and cowpea are mandated crops at the institute, these crops have been widely promoted as the ideal rotational crops in the abovementioned community-based projects.

By means of on-farm experiments conducted in collaboration with various producer groups and the improvement of access to seed suppliers, many producers are now more prepared to expand on the production of legume crops (Photo 2).

The development of appropriate technology that can impact cropping systems and bring on-farm change in rural communities, is no easy task. However, projects such as the grain production advancement project, resulted in a positive response towards advanced production methods by participating producers (Graph 1). 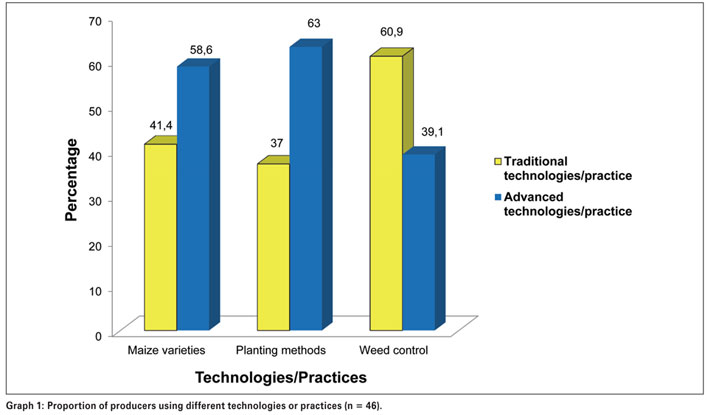 The combination of on-farm experiments and interactive training at numerous occasions in the project, made a significant contribution to convince producers of the advantages of some of the technologies.

The superior performance of hybrid maize in comparison with local varieties or open-pollinated varieties clearly motivated them to opt for hybrids. In the case of chemical weed control (usually seen as an advanced form of technology) the purposeful collaboration with producers in the on-farm evaluation process, resulted in the experimentation or testing of some herbicides by individual producers on their own initiative.

According to another investigation on the impact of the same project, improved planting practices, which imply the use of planters instead of the traditional plough furrow method, have increased by 33%. Before the project, the proportion of producers using planters was 55% which increased to 88% by the end of the project.

Provision of training of quality and relevance

In view of the limited educational opportunities in the rural South Africa of the past, the need for knowledge and information is of great significance.

This provides an enormous opportunity to impact directly on the lives of producers in many remote areas of South Africa who are still at the tail-end of technological progress. This opportunity has recently been thoroughly exploited by the ARC-GCI.

In a comprehensive training programme covering the period May 2013 to March 2014, a total of 1 135 producers were trained at 41 training events. In this training programme the Institute was able to train producers on a wide range of topics relating to maize, dry bean, groundnut, sunflower and sorghum production.

Bridging the gap between the producer, service providers and agri-businesses

In the past there were two important shortcomings of rural development strategies. Firstly, there was an overemphasis on technology as the only driver of development and growth.

The second weakness was the failure to purposefully link producers with service providers beyond community boundaries. Producers might be knowledgeable, skilled and empowered, and have participated in the development of technologies, but if business opportunities are lacking, the technologies still allow only marginal improvement.

We need to recognise that productivity in rural farming communities cannot be achieved by technological advances alone. Producers in rural communities need to be purposefully supported to gain access to providers of inputs and to be incorporated into value chains.

Innovation platforms (IP’s) are one approach which seeks to address the vast gaps between often remote farming communities and institutions in general. IP’s can be defined as combinations of selected key actors committed to collectively link producers to the complete agricultural value chain. 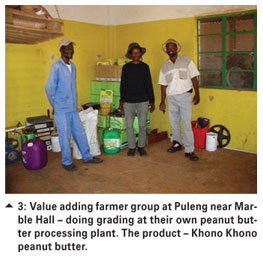 The lack of institutional arrangements and capacity is a serious weakness experienced with most community development projects. In order to address this weakness, training on IP’s was one of the priorities of the training programme mentioned earlier. Altogether 43 extension officers, based at farming communities, were trained to enable them to guide community members in the establishment of such platforms.

Community projects have their own complex nature with a diverse range of challenges such as:

Sustainable intensification of agriculture in rural farming communities will require more than technological innovation. Much more needs to be done to bring about institutional change and establish effective linkages to agri-business and markets in order to ensure the development of thriving rural communities.