Psittacosis is a disease that can be contracted by people who come into close contact with birds and more particularly those of the parrot family (psittacine birds). The mico-organism causing pstittacosis is Chlamydophila psittaci.

Infections occur naturally worldwide and have been identified in at least 400 avian species, particularly caged birds, colonial nesting birds, raptors, ratites and poultry. Pigeons, turkeys and ducks are most often affected. Among cage birds affected, more than 70% belong to the parrot family.

For practical purposes, all species of birds are a potential source of infection, although the prevalence of infection is significantly greater in caged birds than in wild ones. Some birds carry this organism asymptomatically. Others become mildly to severely ill, either immediately or after they have been stressed (nutritional deficiencies, handling, overcrowding or egg laying).

The micro-organism lives within the cells (intracellular) of the body. In people, parrot fever is readily treated with antibiotics, but it can be fatal if it is left untreated. Other potential hosts of Chlamydophila species include sheep, goats, cattle, dogs, pigs and horses. The disease is also known as bird’s fever and avian chlamydiosis.

How do people contract the disease?
Psittacosis is a direct zoonosis contracted as a result of close contract with birds, usually by inhalation of the infectious agent. The droppings of infected birds, which may be symptomless carriers or noticeably sick, contain large numbers of organisms. When the droppings dry out an aerosol is formed in which in the organisms are suspended and can be inhaled by people. Contaminated feathers also play an important role in spreading the disease.

Transmission from one bird to another also occurs by inhalation of contaminated droppings and by the ingestion of infectious material, but transmission via the eggs (transovarial) of infected birds to the chicks is also possible.

A person is an incidental victim of the disease and transmission between people (person-to-person) is rare. Dogs can be infected with C. psittaci if they eat infected bird carcasses or faeces. They are probably also infected via inhalation.

The disease in birds
The disease in birds may not be obvious and apparently healthy birds may carry and excrete the organisms in their droppings. When stressed, such birds show severe symptoms of illness. Birds that have a lowered resistance due to overcrowding and unhygienic conditions in their cages, nutritional deficiencies, or prolonged transportation are more prone to the disease. Birds with the disease may show fever, greenish diarrhoea, inappetence, emaciation, respiratory distress, discharges from the eyes and nose and listlessness. 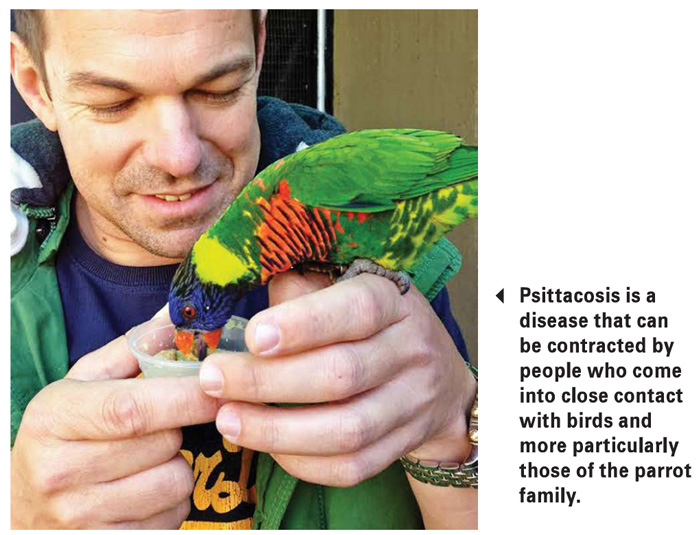 The natural sources of infection are wild as well as domesticated birds, other animals of both types may also possibly constitute a source of infection. If the host animal, usually a bird, is exposed to stressful conditions, the micro-organism multiplies readily and is consequently excreted in large numbers.

Birds excrete the organism intermittently and at times continuously for weeks or months in faeces; this applies to a lesser extent to nasal secretions. There are several strains of C. psittaci, which vary in their capacity to cause disease. This may explain why the disease in humans varies so much in severity.

Symptoms in humans
The interval between infection and first signs of illness is usually about ten days but varies from four to 15 days. Symptoms include fever, headache, muscular pains, chills, respiratory signs such as coughing or pneumonia and malaise, among others. The disease in humans may vary from a minor to a serious illness. Parrot fever in humans and birds often starts with flu-like symptoms and becomes a life-threatening pneumonia.